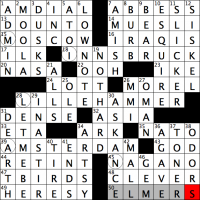 hello! i’m back from france, and very grateful to laura for filling in for me on blogging duty while i was on vacation. welcome to episode #579 of matt gaffney’s weekly crossword contest, “Cold Open”. i typically try to solve week 1 puzzles without peeking at the instructions, but matt changed things up on us this week by putting the instructions into the puzzle title. so, uh, there goes that. anyway, the instructions this week are to name a city in the news. okay, what are the theme answers? five across answers in this 13×13 grid are clued only by a year and either (S) or (W):

these are, of course, olympic host cities corresponding to either the summer or winter olympiad of the years indicated. taking the first letters of these in order gives MILAN, a city in the news as it was recently announced as the co-host (with cortina d’ampezzo, which had previously hosted the 1956 winter games) of the 2026 winter olympics. “cold open” is a fun title for this theme, incorporating both the idea of winter olympics and taking the first letters of the theme answers.

let’s talk about the grid for a minute. with only five short-to-medium theme answers, it’s quite sensible to go with a smaller grid. however, i found that the fill was distractingly rough in places. the NW corner had {Where you’ll hear a lot of talk} AM DIAL, which is interesting, but there was also the six-letter partial DO UNTO, unwieldy plural DUSKS, and foreign possessive À TOI. that’s clunkier than i’d like for a simple theme like this one. elsewhere, ALLS was clued as {“___ Well That Ends Well”}, which is pretty much how you have to do it, but ENDS itself was also in the grid at 41d—another distraction. they could have been clued as {“___ Well That [41-down] Well”}, and similarly.

having said that, this is a fairly open grid layout, with nice big corners in the NE and SW that matt pulled off very nicely. i also enjoyed the clue {Gene proven to influence entertainment choices} for SISKEL. overall, i’ll give “cold open” four stars.

speaking of cold open, that was also the title of puzzle #1 at last year’s boswords, which was saturday night live-themed. this year’s boswords is only a few weeks away (and will not be SNL-themed). will i see you there?