Looks like we have a WSJ debut today. Congratulations, Warren!

The title had me thinking we would have entries that turned corners, but that’s not the case. Warren has taken phrases that have a directional word and anagrammed that word into something else, with resulting crossword wackiness. 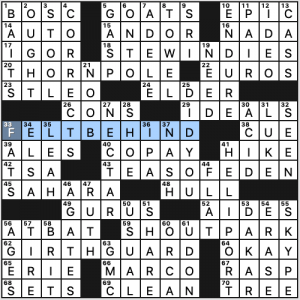 I was thrown off for a bit by the inclusion of “right” and “left”; those were the last two I got. It seems odd to include them without “up” and “down” (which obviously wouldn’t work with the theme constraints). And I know it’s not really possible or necessary, but a part of me wanted the directional portions of the entries to be in their respective places in the grid: THORN POLE in the north, STEW INDIES in the west, etc.

With six long theme entires, the surrounding fill isn’t so sparkly, and BOSC at 1a portends rough sailing ahead, but all in all, it wasn’t so bad.  I did like HELIPORT (though I wanted HELIPAD), NECTAR, and NOOB.

Some nits could be picked here, but in the grand scheme of things, not a bad debut. 3.5 stars. 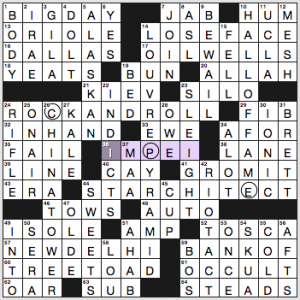 Quick write-up, got an early morning tomorrow. Theme is 36a. [Subject of this puzzle (1917-2019)], I.M. PEI, who died just under a month ago. The themers are strewn about the grid, with two 6-letter themers noticeably shorter than the quartet of non-thematic 8s that also run Across. There’s the DALLAS City Hall, with the clue repeating a key word of the ROCK AND ROLL / HALL OF FAME. There’s the LOUVRE PYRAMID, and the awkwardly split BANK OF / CHINA TOWER. And then to fill in the theme symmetry, there’s STARCHITECT, which isn’t a term I’ve seen, I don’t think. (Gonna use it for bakers who craft structured desserts with plenty of starch.) The three spots (I’ve circled them) where the themers intersect is a Kahn trademark, but I honestly don’t think such intersections bring much delight to solvers.

Likes: LOSE FACE, BIG DAY, GROMIT. Not keen on seeing in the grid, particularly outside of a tough themeless: ISOLE, IRAE, MAA (can we please kill this entry off? show me the children’s books where we learn that goats make that sound), SKUA, AFTS. 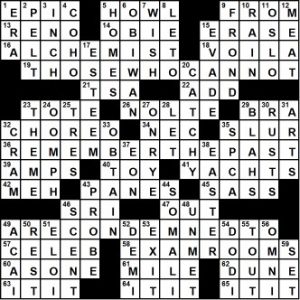 I like quip puzzles, and this is one with a twist. I am unfamiliar with the constructor’s name, so this could be a debut. As you can see in the solution, Joe gives us “a very literal warning:

Other good Across stuff:
16a [Lead person in the Middle Ages?] ALCHEMIST–This is cute, as lead here means the substance that humans have always hoped to change into gold.
58a [Physical locations?] EXAM ROOMS

The longest Down answer is six letters, so not much to report on there. But this puzzle is CATCHY. It has OOMPH. And, frankly, all the shorter fill seems just fine to me.

From a fan of quip puzzles, here is a 3.75-star rating, Joe. Welcomed to the club! 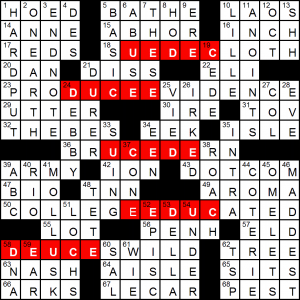 Your typical word-scrambled-across-the-middle-of-theme-phrases puzzle. The revealer is colourful and apt: DEUCESWILD tells us to scramble DEUCE, with “wild” being a common cryptic anagram keyword. It is quite a large chunk to hide, so the theme entries lean towards the functional: SUEDECLOTH, PRODUCEEVIDENCE, full-name BRUCEDERN getting centre-billing, and COLLEGEEDUCATED.