This week’s Fireball is a contest puzzle. We’ll publish a review after the deadline. 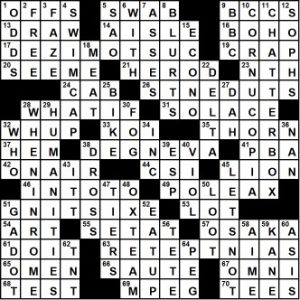 The theme is–well, the clues are DRAWKCAB, and so are the theme answers. To wit:

I think it’s pretty clever. The puzzle went pretty fast for me, for a Thursday. Other stuff of note, positive:

Hmm, nothing in the fill really bugged me. So, no negative counterpart to the above. 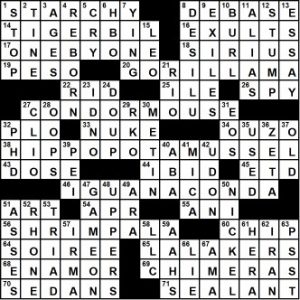 Great title, “Zoo-illogical,” as the theme answers are all two animals rolled into one name, so to speak:

MET IN is awkward and making its debut. It is joined by the unexciting-at-best ID NO. And then there are EOS, UDON, ARA, PEI, AAHS, PSST, AMA, ILE, PLO, IBID,  ETD, APR, and good ol’ ANI DiFranco. Three of those would be okay, but beyond that, one has to ask if that amount of theme is worth the cost.

I liked this one quite a bit! The revealer is at 65a and gives us instructions we can safely ignore: DO NOT BEND [Mail instruction sometimes ignored, as suggested by the words in this puzzle’s circles]. The other entries each end in a word that is something that might be included in the (snail) mail and is bent either upwards or downwards. 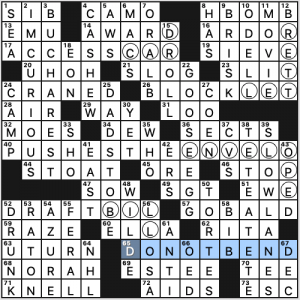 While it was pretty clear what was going on when I solved the first theme answer, I still got the pleasure of an aha moment when I came across the revealer and realized each circled word was something you might put in the mail. The only nit I can pick is that I wish the circles weren’t employed for this. By Thursday, I would have thought most solvers would be able to discern a tricky theme like this one. It would have been more fun to find the bends on my own rather than have them spelled out for me. But still, this was a good time; bending themes can be thorny to pull off, and Evan does it nicely here.

In fact, look at that super-shiny fill! “I’M CURIOUS“, BUCHAREST, GOOSE EGG, DADS-TO-BE, TÊTE-À-TÊTE, and SLOW LANES. Very nice. And I like GO BALD and CASHEW, too. That’s a really impressive clutch of fill there given the trickiness of the theme. Well done!

LLOSA [Literature Nobelist Mario Vargas ___] was the hardest bit of fill for me, but hey, it’s Thursday, and I felt the crossings were all fair. Same with ODELL [Beckham of the Browns].

I really liked the cluing as well, especially in the NE corner. Here are some of the highlights:

Solidly tricky theme (made too easy by the use of circles IMO) with stellar fill and strong cluing. 4.4 stars from me. 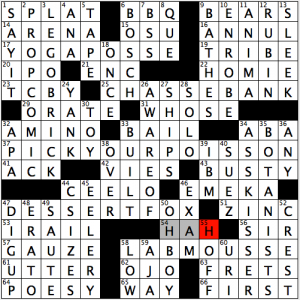 From the title, I was pretty sure we were dealing with some S-based puns. Sure enough, where once there was one S, now there are two S’s to punny effect. Like so:

Great theme answers — PICK YOUR POISSON was my absolute favorite. Some really great non-theme fill in here too: PROP COMIC [One with a thing for jokes?], LEGO BRICK, ASS-KISSER. Loved seeing a reference to the new show “Los Espookys” and a new ANA clue [“Los Espookys” star/creator Fabrega].

A little bit of ugliness with C-SIZES next to EELERY and OJO crossing AJA, but overall I thought this was really nice. 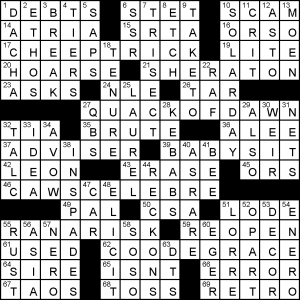 Today’s puzzle by Mr. Coulter features four puns based on bird sound effects: CHEEP for CHEAP; QUACK for CRACK; CAWS for CAUSE; COO for COUP. It’s an interesting choice to opt for two French phrases, which really stretches the “sensicalness” of the puns. On the other hand, foreign phrases are a lively vein to mine for interesting entries.

Not much else to note. INSPADES was the most interesting entry outside of the theme. The clue, [To a great degree], was vague enough that it took a while to emerge. The clues today had that feel a lot of the time, but my brain may just have been foggy. ASRARE is the hilariously contrived answer of the day. It is in an area with a lot of entries criss-crossing two entries, if that counts for anything. In obscure crossword-ese, it is worth noting EGER, as few of us are up on our Hungarian wine regions…