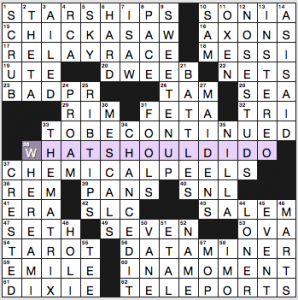 Pretty good themeless here. Anyone else find themselves dramatically slower in the northwest quadrant? For example, 15a. [Oklahoma tribe originally from the Southeast], CHICKASAW. CHEROKEES also fits, CHOCTAWS is too short unless you try to wedge a K in there. All three of these nations were forcibly dislocated from their ancestral homes in the Southeast to Oklahoma. The tricky clue for RELAY RACE (17a. [An anchor is at its end]) also duped me. And that sorta misleading “the alphabet” in this clue: 2d. [Letter found between two vowels in the alphabet]. Even when you figure out it’s the Greek alphabet, well, hell if I know exactly which Greek letters are vowels and what order everything’s in. (THETA is between eta and iota.)

Fave fill: “TO BE CONTINUED,” “WHAT SHOULD I DO?” (which puts me in mind of Nirvana’s “On a Plain”), CHEMICAL PEELS (I would never), DATA MINER, TELEPORTS (my #1 pick for the best superpower to have), “WHERE AM I?” (shout-out to the late Ross Perot’s running mate, Admiral Stockdale), THE MATRIX, CHANCED IT, and NOSE STUDS.

Really smooth fill overall, with no entries that are straight-up junk. I might’ve preferred not to have three entries with the first-person pronoun I and two with IN, but that’s not a big issue. A solid 68-worder. 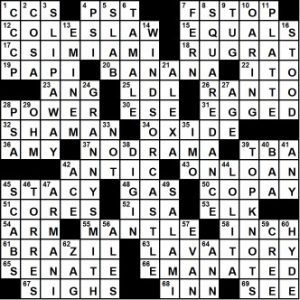 THEME: Two-word phrases that run vertically lead with (that is, they have at their tops) words descriptive of knot types. And, of course, there is a reveal, which allows us to lead with it: 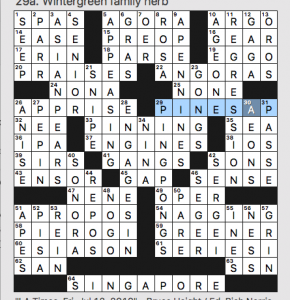 There is only one theme answer, or all the answers are theme answers, depending on your point of view. 64a is [Country spelled with the only nine letters used in this puzzle’s answers] and the answer is SINGAPORE. That’s it. That’s the theme. This was no fun.

What I didn’t know before I did this puzzle: that PINESAP is an herb in the wintergreen family. Pretty! 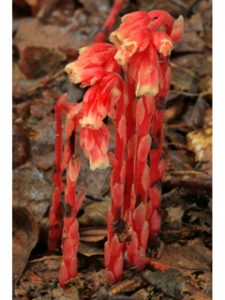 A fun, relaxed, almost-too-easy Lucido to kick off the weekend!

The central Across entry, THE BACHELORETTE ([Franchise in which episodes typically culminate in a “rose ceremony”]), surprises me. I’ve never watched a full episode of it or its masculine counterpart. Both shows have always struck me as perpetuating gender-based stereotypes. YMMV.

But, since it’s there, I found it fun to combine other terms that run consecutively, either horizontally or vertically, looking for other elements of surprise. 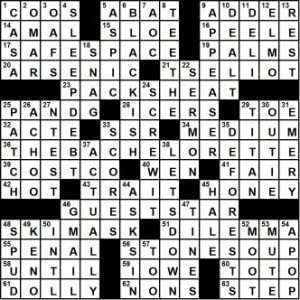 The one entry I wish Aimee could have avoided is APPEASER, simply because it’s not a word that people use regularly and, being eight letters long, it stands out. The one partial, I OWE, is fine. AOC is good, clever, and sneakily educational (can’t believe it’s been in a previous puzzle, but it looks like Jonesin’ used it earlier this year).