I don’t mind a word ladder theme as much as some people, so I’m wondering how those same people liked (or didn’t) this theme. Me, I liked it quite a bit…once I grokked it, which took way too long.

Theme answers are all word ladders, but they are listed in place of phrases of the form “___ to ___”. I thought this was quite a clever approach. 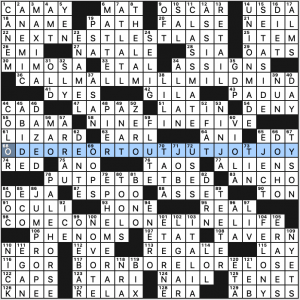 For me, this theme was executed perfectly. It stymied me turn after turn until I was nearly done with the solve, with numerous gaps down through the center of the grid. Then I finally got the aha moment when everything clicked, and I was able to fill in each themer systematically and polish off the grid. Oh so satisfying!

Despite my slowness in catching on, I’d say this was one of my faster solve times for a 21x. I tried not to linger too much on anything that tripped me up, and on the whole it paid off. I felt like I was able to traverse the grid fairly smoothly filling in letters at a steady pace.

Fill on the sparkly side: UNION-MADE, SET ASIDE, CLASSMATE, EPHEMERAL, JUMP ROPE. I’m not sure how PALE HORSE [Mount for Death in Revelation] would hold up in court, but I was just happy to make sense of the clue at the time.

There’s the usual clutch of crosswordese: ETAT, A NAME, IF AT, ANI, A NO, ET. AL, but nothing too egregious. Oh, I just spied ESPOO [Finland’s second-largest city] again. Yikes. I suppose it’s crossword-worthy, but dang if it doesn’t look like a TV channel dedicated to bathroom sports. 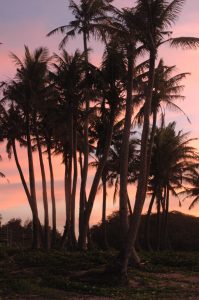 And I had no clue on the word ATLATL [Aztec spear-thrower]. I assumed this was a proper name, but no, it’s a tool for throwing a spear with more leverage and power than just your arm. You’ve seen dog owners with similar devices for throwing tennis balls great distances, yeah? Same concept.

37d AS AN is clued [Strong-ox connection]. But let me tell you about the village of ASAN on Guam. On the western shore, it was a major landing site for the U.S. Marines in WWII. On Nimitz Hill, above ASAN, Korean Air Flight 801 crashed in 1997 killing 228 people. These days you can visit its beautiful beach park (a part of the War in the Pacific National Historic Park) to catch some wicked sunsets. 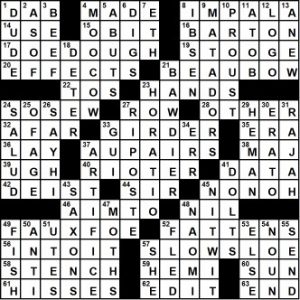 THEME: The title is a clever play off 007, no? But it’s more literal, as we have six theme entries of one-syllable homophones with the long-O sound. We start with the unnecessary (imho) reveal: 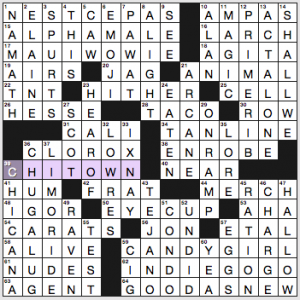 I’m not thinking in paragraphs tonight.

Did not know: 59a. [1963 Four Seasons hit], “CANDY GIRL.” The counterpart, I assume, is the party boy with the MAUI WOWIE who wants to CHUG-A-LUG his beer.

Wondered if CHICANA was kosher to use these days. According to one Diversity Style Guide, yeah, it’s fine. What I didn’t know: “These terms [Chicano and Chicana] announce pride in indigenous ancestry, which was a significant ideological element of the Chicano movement.” 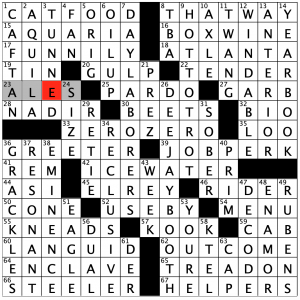 I have linked to Greg Johnson’s web site before, so I won’t again, but he has a knack for making good themeless puzzles. This one is no exception. I did not find this too difficult, but I also did not try this Downs Only. Solving some of these clues made me smile out loud; others made me groan a bit, but the solve was enjoyable. See the next post for another Greg Johnson puzzle, as he has today’s Stumper as well! 4.5 stars for this one.

More blogging from me on Tuesday. Here is that promised tune! 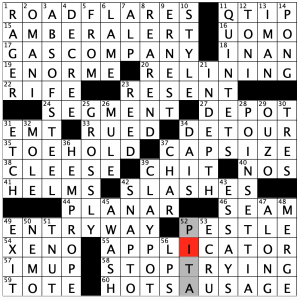 Slow start, but then got this down in a decent amount of time. Greg Johnson, who also has today’s LAT puzzle (see above!), has today’s Stumper as well, and while this is much harder, once you get to about halfway in this one it didn’t seem to thorny. It wasn’t overly difficult to get a 35A! I have no error marks! Usually when I get stuck I will do a check to see what I have correct, and it does feel nice to finish one rather smoothly. 4.6 stars for this one.