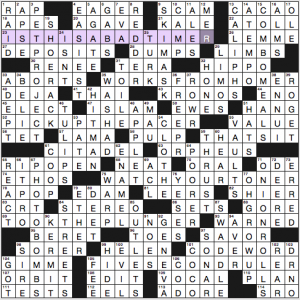 I’m kinda migrainey tonight so I was dreading the puzzle, but whaddaya know, it was actually fun! The wordplay theme (add an R to the end of a familiar phrase to change the meaning, clue the new phrase accordingly) played well, and I actually laughed at the last one. The fill was solid and had some spice to it. And there were so many fresh and clever clues. It’s a real treat to have a 21×21 puzzle that passes all three of these tests, as there are too many that flunk some or all of them.

What really elevates this theme is that the base phrases are so crisp and fun, and then there’s actual humor in the wordplay wrought upon them. If you are a newer constructor, I’d encourage you to look to this theme as what to strive for—lively phrases like the five-second rule (whereby you can eat food that fell on the floor if you pick it up within five seconds) and “Is this a bad time?” as the fodder for your theme, plus amusing visuals in at least some of the theme entries. Even if you don’t manage to fill the grid with great fill, you’ll have bought yourself a lot of solver goodwill with a fun theme.

Tunnel vision: 56a. [New Year abroad], TET. There are over 1.3 million Vietnamese Americans who can celebrate Tet right here at home. And there are billions of people whose “New Year abroad” isn’t Tet at all.

The only fill I didn’t care for was little bits like SHIER with an I instead of a Y (but it’s legit), dull APSE, and … that’s really about it, which would be impressive in a 15×15 grid but it’s amazing in a Sunday-sized puzzle. The theme doesn’t do any amazing structural things like bending entries, or having added letters that spell out something clever, so it’s a “mere” 4.5 stars for me rather than the 5 stars that I’d accord to a theme that’s both wildly ambitious and perfectly executed. 4.5 stars for a simple (but so well-executed) add-a-letter theme is tip-top. Keep up the great work, Caitlin! 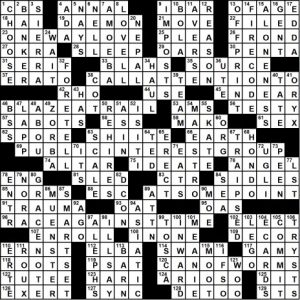 Regarding the title, imo, we need a second apostrophe after the N, unless the intent is a rendering other than “See and Say.” Having raced through in just over 10 minutes, I did not grok the theme. So, let’s take the starred clues and answers one at a time and see what happens: 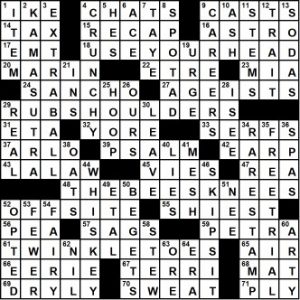 THEME: See title and the following:

And then there is:

It’s a meta so easy that even I could figure it out! The instructions say “What nine-letter noun has been lost from this puzzle?” Let’s see what we can find. 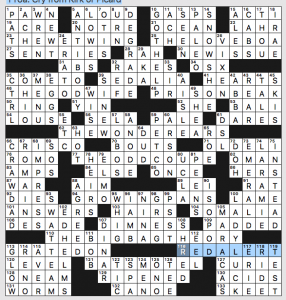 When I wrote down the letters missing from each entry, I found the word STORYLINE. Nice! All the theme answers are funny in their own right and the meta is a nice added fillip.

What I didn’t know before I did this puzzle: that Bert LAHR won a Tony (for the musical “Foxy,” which I’d never heard of).

I found it a slog to figure out this theme. It’s clever but I’m not sure it was worth the effort. My effort, that is.

I had no idea what was going on until I got to the revealer at 120a [Govt. employees encoded by the nine other longest across entries in this puzzle … and who might be called in to decode them]. The answer is FBI AGENTS. So I went looking for FBI in the longest entries. Nope. I went back and looked again and realized that each theme entry points us to a letter: 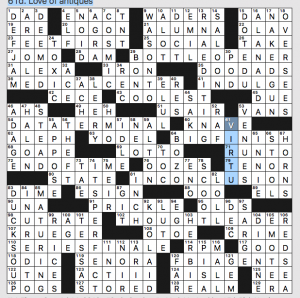 If we follow the directions, we get FBI AGENTS. Which we already had from the revealer. Not my favorite kind of theme.

What I didn’t know before I did this puzzle: I’d never heard of ice dancer TESSA Virtue. She’s Canadian. We also have VIRTU in the grid at 61d [Love of antiques] which feels like a dupe to me.