Andrew Ries puts old puzzles up on his website. Today I did one of his from 2014 that happens to have a very similar theme, so this was an odd echo. It’s not a complete duplicate, and Ed Sessa’s version is a nice Monday puzzle – accessible, solid, consistent. 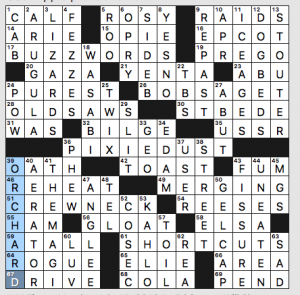 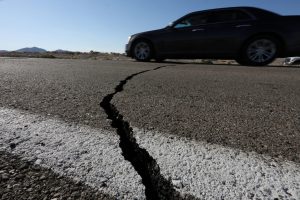 A car passes over a fissure that opened on a highway during a powerful earthquake that struck Southern California, near the city of Ridgecrest, California, U.S., July 4, 2019. REUTERS/David McNew

Sorry, no “what I didn’t know” for this puzzle. 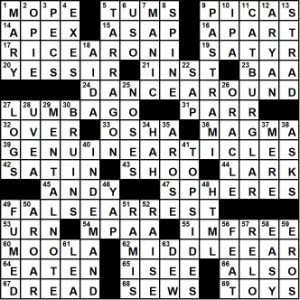 Other stuff of note, pro and con:

The seldom seen or heard back malady LUMBAGO I could do without.

I’M FREE is a nice, short phrase of common usage.  It dupes I SEE, which is in the same corner, but … we see lots of similar dupes these days. A recent NYT Sunday had, as I recall, six “I” phrases, including I’M EASY and I’M SPENT.

And these are all nice:

Each theme entry in today’s puzzle is not an in-the-language phrase but a made-up job. They’re tied together with the revealer at 55a JACK OF ALL TRADES [Handy sort, or what you might call the character holding Jobs #1-3]. The person holding said jobs is the ubiquitous fairy tale / nursery rhyme everyman known mononymously as JACK. 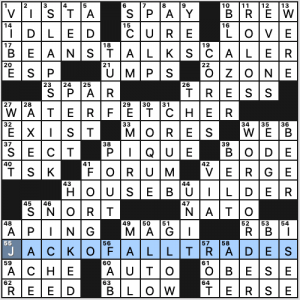 I found this mostly enjoyable, and I’m a fan of using nursery rhymes and fairy tales as crossword fodder. But I’m not a fan of theme entries that aren’t in-the-language phrases (or derivatives of such based on some established wordplay). There’s an intrinsic unfairness to them for the unsuspecting solver. So it’s important that if they’re employed in a grid that all the crossings are fair. For the most part, this is true here.

But the other factor is the cluing of these entries, and since this is a Monday puzzle, I would think you’d want more helpful clues than simply “Job #1”, etc. For the newer solver, having to rely almost entirely on the crossings seems a little unfair.

Plus, I think there’s an opportunity here for some playfulness. I’m imagining an unemployed Jack perusing the Want Ads and finding these entries: [Position for one seeking new heights], [Position for a well worker (must bring own pail)], [Position for a residential carpenter]. And finally the revealer, [Handy sort, or the perfect applicant for all of the employment positions in this puzzle].  Okay, maybe that’s a little wordy, but you get my drift.

Aside from the cluing of the theme entries, I’m liking the rest of the fill, especially the marquee entries SLAPSTICK and WORD ORDER. The crossing of TOQUE and PIQUE in the center is a nice use of the Q as well. I suspect the grid is a pangram (I see a Z, X, J, K, W, etc.) but I don’t really care that it is. I just care that the fill is smooth and flows with interesting entries, and it is and does, IMO.

On the whole, a fun puzzle. I would have jacked up (ha) the theme clues a bit more for added fun and help to the newer solver, but other than that, a very nice grid. 3.75 stars. 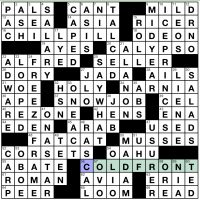 Each of the theme entries begins with a word that might make us shiver – ICE, CHILL, FREEZE, and SNOW. Certainly a set of COLD FRONTs! My only small qualm with this theme set is that all but the first one use the “cold” word in a different way. For example, freeze in FREEZE FRAME means that the frame is paused, not cold. ICE PRINCESS is the only themer that doesn’t use an alternate meaning of the cold word, which make the theme feel slightly less elegant / tight. Otherwise, it was a lovely Monday puzzle!

Other random thoughts:
– I’m surprised DORY was clued as a fishing boat instead of via Pixar’s Finding Dory. That’d be a way to modernize and have a woman character represented in the grid.
– Nice to JADA Pinkett Smith, NIA Long, and JLO represented in the grid! Yay for including women of color! Boo for there still being many more men in the grid than women.
– I appreciated CORSETS being referred to as old-fashioned and I’ll admit I chuckled a bit at [Kvetch like a fish?] for CARP. 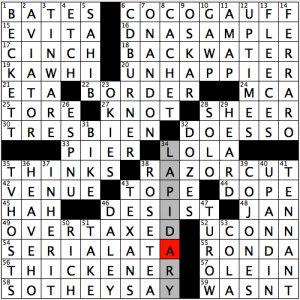 Trying to squeeze in some practice for Lollapuzzoola 12, which is now just a month away and which I’m solving using just down clues — and, wow, this one killed me! Those wide open corners made it really hard to break into the puzzle. I made slow but steady progress until grinding to a total halt in the SE corner.

A big problem was that for 38d, [Fragrant brew with vitamin C], I had LIME TEA and was very confident in it, and it took me a long time to consider the correct answer, ROSE TEA. I also had no idea what could finish 54a, SERIALAT?, which turned out to be SERIAL ATA [Computer bus interface used to connect hard drives and the like]. That prevented me from seeing the possibility of LAPIDARY [Artist who makes cameos], which I thought was ENGRAVER for the longest time. I think that’s a tough crossing even if you have all the clues though :)

The 9×4 NE and SW corners are very impressive — it took me a while to see the possibility of COCO GAUFF at 6a [Youngest player ever to compete at Wimbledon], even though I made sure to point her out to Joon (who’s always looking for 9-letter marquee entries for Rows Gardens).