We’re looking for something you might find in a chemistry class, and the first thing I find while solving is that eight of the across entries are incomplete — each needs to be completed by a word that ends with -AP:

Observation #2: The letters that complete the –AP words are symbols for chemical elements, like so:

(Note: Since I am not a chemist, unlike another Fiend blogger and crossword constructor who also constructed a chemistry-themed metapuzzle, I had to look some of these up.)

Observations #3 & #4: Each element has an atomic number, often abbreviated in crossword grids as the entry ATNO, and each of those numbers corresponds to a numbered square in the grid: 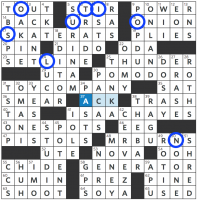 At this point I got totally stuck. I put the puzzle away and came back to it. Then got stuck again — see Glitch #1 above. So I called upon a trusty metapal (a certain MR BURNS, but not the one who is the [49a: Love object of Waylon Smithers]) and figured out that the letter in the 7 square should be I.

Observation #5, which I would’ve arrived at far sooner had I looked at the letters as they were laid out in the grid and not as a list on a separate piece of paper:

INSUOTOL == SOLUTION, which is something you might find in a chemistry class, and also the … solution to the puzzle. 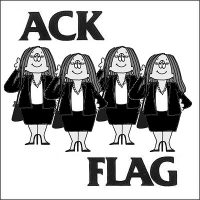 In the actual grid, had I looked at how those letters were laid out in it, I would’ve seen the, uh … SOLUTION immediately, as they are placed in the grid reading from left to right. To echo [37a: Cathy’s cry], ACK! Overall, a feat of technical construction, and it’s refreshing to see names other than Shenk, Gaffney, and Berry in the byline (with all props to that triumverate).

This entry was posted in Contests and tagged Milo Beckman, Pete Muller. Bookmark the permalink.