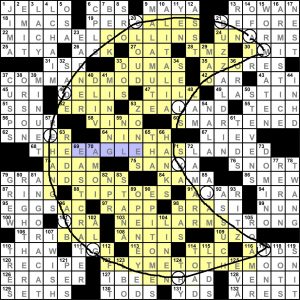 Hello there, everybody! Here is hoping all is well and that you’re staying warm in the heat! Also, for those in the path of Tropical Depression Barry, here is hoping that you all are doing as well as can possibly be, given the circumstances.

Fifty years ago today (July 16, 1969) was when the Apollo 11 launched, and in a year where we celebrate the golden anniversary of the moon landing, we have a very detailed crossword puzzle for you highlighting some of the people who became well-known after its successful mission. (Of course, so many more people were crucial to the mission’s success, especially women such as the lead biomedical engineer for that mission, Jody Sullivan, and the trio of Poppy Northcutt, Joann Morgan and Margaret Hamilton, who were the women that were depicted in the movie Hidden Figures.)  Another neat thing about the puzzle is that there are circles in the grid when, starting with the letter “A” and connecting the circles alphabetically, form the shape of a crescent moon. Lastly, the “eagle” in THE EAGLE HAS LANDED is inside of the moon, acting as Apollo 11 landing on the moon in the grid (68A: [103-Across’s message to NASA on 7/20/1969]).

Wonderful grid to solve, especially given the historic nature to this week. Only spot of bother came with the intersection of STANA (83D: [Actress Katic of TV’s “Castle”]) and RAPP, but guessed correctly on that one because I had believed that I heard of the latter before a couple of times and remembered the spelling of his name (97A: [“Rent” star Anthony]).

The event (moon landing) occurred just over a decade before I was born, so, obviously, all my memories of the mission has come from textbooks and videos seen that recounted the famous launch. Nevertheless, like so many, just learning about the fact that a spacecraft made it all the way to the moon was awe-inspiring. Not that I knew that I was taking being an astronaut for granted, but just looking back at the number of people who initially dreamed about being an astronaut and put that on their elementary school yearbooks, and the impact the Apollo 11 mission had in making that happen, is just a wonder. I would love to know any memories that any of you might have of when you first came across the story of the Apollo 11 mission, especially if you were alive when the mission first launched from Kennedy Space Center and, eventually, became a success.

“Sports will make you smarter” moment of the day: BECK (7D: [Guitar virtuoso Jeff]) – There have been only nine players in the history of the PGA Tour to have had a round where they shot under a 60 in a round (playing fewer than 60 shots to complete a round of 18 holes). One of those occurrences came in the 1991 Las Vegas Invitational, where Chip Beck had a third round in which he carded five pars and 13 birdies (a PGA Tour record for most birdies in a round). 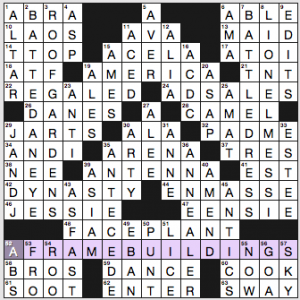 There’s just one overt theme entry in this puzzle: 52a. [Structures illustrated twice in this puzzle through both black squares and letters], A-FRAME BUILDINGS. We somehow have two such buildings stacked together, which seems architecturally unsound if you ask me! The A-frame shapes of the black squares in the top middle and in the center of the grid have their interiors lined with the letter A, 18 times over. So there’s both an A-frame shape and chunks of the grid that are “framed” by the letter A. The two unchecked/uncrossed letters get their second confirmation from the A-centric theme.

What else? I wonder if the puzzle might have benefited from a less ambitious diagram—breaking up two or all four of the 11s into pairs of 5s. Because that 1-Across is pretty bad, sort of last-ditch fill: 1a. [Start of an incantation], ABRA. Other awkward-for-Tuesday fill includes A TOI, weird spelling EENSIE, the spelled-out ampersand in J AND J, EBAN, ALEE, and AMAT. Maybe also ANNEALER, T-TOP, ACELA? 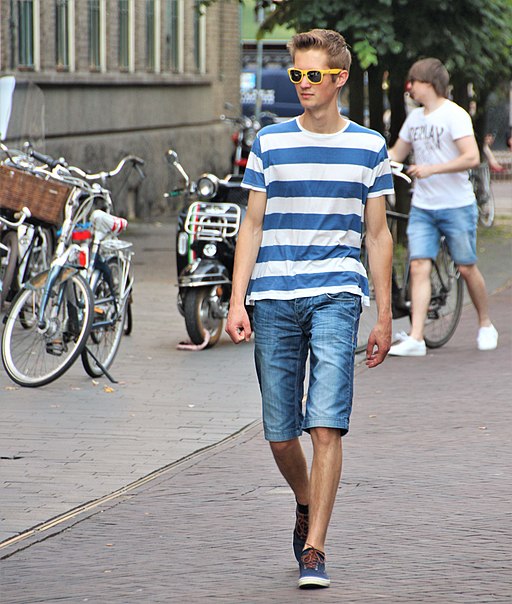 The guy in the back sports the classic jorts.

A sort of flat 3 stars from me. 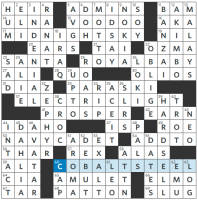 17A: MIDNIGHT SKY [Dark overhead expanse]
25A: ROYAL BABY [Meghan and Harry’s Archie, for one]
37A: ELECTRIC LIGHT [It flickers with a flick]
50A: NAVY CADET [Midshipman]
60A: COBALT STEEL [Tough drill bit material]

What “Blues Duets” do we have in this puzzle? Well, each themer is made up of not just one, but two shades of blue! All ten words in the themers are types of blue, which feels quite lovely to me as a theme set, as I can’t imagine there are many more two-word phrases that accomplish this. Sure, ELECTRIC LIGHT feels ironically like an old-timey phrase and COBALT STEEL seems oddly specific, but it works. I also appreciated that SAD was simply clued as [Blue] – nice touch.

Other random thoughts:
– I’d never heard of VOODOO economics before. According to the interwebs, it is a seemingly conservative term for “an economic policy perceived as being unrealistic and ill-advised, in particular a policy of maintaining or increasing levels of public spending while reducing taxation.”
– The OZMA / BANZAI crossing was a Natick for me, though I guess I could have intuited Oz for OZMA.
– Women represented in this puzzle? Princess OZMA, Megan Markle (as a mother), kick-ass boxer Laila ALI, and actress Cameron DIAZ. Not bad – though, as is almost always the case, there were more men referenced in the puzzle than women. 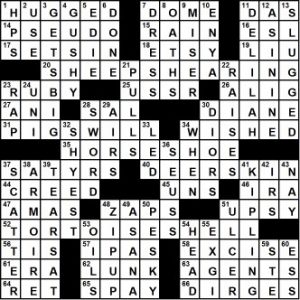 THEME: Five two-unit animal compound words that already have one meaning are, with the addition of an apostrophe and a space, repurposed into possessive phrases.   So, ….

Not much else to cite, although my fave in the non-theme fill is

[11d Biblical clipper?] DELILAH, whose short-term sweetie, Samson, is the only biblical character to be a judge, a puzzle constructor, and a mass murderer. To say nothing of his contributions in the area of road rage! 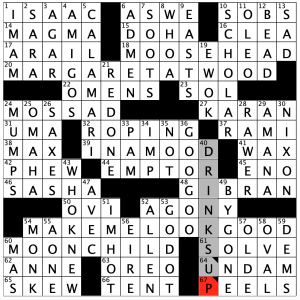 The revealer is in the middle of the grid, and it made me look back at what exactly I had filled in. It put me “in a mood,” but it was a good one!

I chose another color for the letters in MOOD, if you didn’t pick up on it. This surely is a theme you don’t really notice while solving. At least I didn’t! But I am also oblivious to a lot of things; just ask my wife! I suppose I should read The Handmaid’s Tale, or at least watch the Hulu series, before September, since I think I am one of the few people in this country who hasn’t done either! Nice puzzle, Matt! 4.4 stars this week. 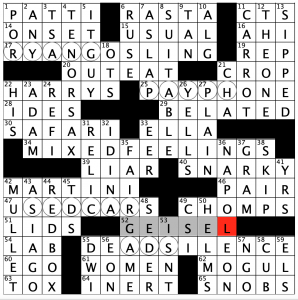 We definitely have two names I have never seen before, and they were not in the constructor name database on this site, so if this is a debut puzzle by either of these two, congratulations! To get what is going on with the theme, you have to do a small amount of anagramming, but it doesn’t appear too difficult:

The circles letters anagram into the words in italics above, thus giving us four examples of “mixed feelings.” If this is in fact a debut, it is a great debut puzzle. It certainly didn’t “Tuez!” 4.3 stars from me.