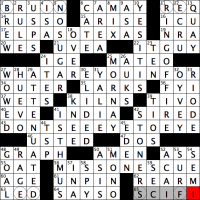 hello and welcome to episode #580 of matt gaffney’s weekly crossword contest, “Why Can’t We?”. the instructions this week are to name a two-word phrase. what are the theme answers? the four long across answers have parenthetical numbers in their clues, so that seems like a good bet:

okay, so what do we do with these? the first thing that i noticed was that the parenthetical numbers are a permutation (reordering) of the numbers 1 through 9. so it seems we are going to have a nine-letter, two-word phrase, and we will get either two or three letters from each theme answer (three in the case of WHAT ARE YOU IN FOR) and put them in the indicated places to read off the answer.

the second thing i noticed was that many of the words in the theme answers are homophones of letters. on my first reading, i thought it was one from each theme answer: EL (L), YOU (U), EYE (I), and CUE (Q). putting those in the indicated order gives ULIQUQULI, which is, alas, not a two-word phrase no matter where you put the word break.

it didn’t take me long to notice the other letter homophones, though. there’s actually EL, ARE YOU, SEE EYE EYE, and CUE. but unfortunately, these don’t correspond with the number of parenthetical digits, so it’s hard to know what to do with them. but given the “why” (Y) in the puzzle title, i thought it couldn’t be a coincidence. i thought about letter sound-alikes in parts of words, like O in PASO or X and S in TEXAS, but that idea didn’t go anywhere either. i was a little concerned since it was only week 2, but i had to admit that i was just stuck. so i put it down and looked at it occasionally a few times over the weekend.

the third time i looked at this puzzle, i took a more big-picture approach, and wondered why, if there were only four theme answers, matt had used a 78-word grid with some cruddy fill in places—especially the upper right, where a corner totally unconstrained by theme had stacked abbrs REQ, ICU, and NRA. i figured the Q must be thematically forced, probably related somehow to the CUE of MISS ONE’S CUE. this turned out to be a correct thought, but it still wasn’t clear how they were connected. i thought perhaps 13d QUAY (pronounced like the letter K) might somehow give us a K corresponding to the Q of MISS ONE’S CUE. but that idea didn’t last long. i also wondered if FOR (4) and TO (2) in the theme answers were relevant, but i thought that if they were, ONE’S in MISS ONE’S CUE would be highly inelegant.

more interestingly, WHAT ARE YOU IN FOR is a five-word phrase whose second and third words sound like R U; it goes with 1a BRUIN, a five-letter word whose second and third letters are RU. and DON’T SEE EYE TO EYE corresponds to _CI_I, which matches SCIFI symmetrically placed at 65a. this is quite an ingenious connection, and as an extra elegant touch, the four “extra” theme answers are the across answers in the four corners of the grid.

what’s left, then? well, we take the other letters from those four extra themers, and put them into the order indicated by the parenthetical numbers. doing this gives BE FRIENDS, which is a two-word phrase—and one that completes the question in the puzzle’s title. (BEFRIENDS is also a word in its own right, but matt asked for a two-word phrase, so i submitted a two-word phrase.) i guess WHY CAN’T WE BE FRIENDS would correspond to an answer such as YERBA, which isn’t in the grid (but that would’ve been a neat easter egg!).

i thought this meta was awesome—but in no way was it a week 2. i think if the four extra theme answers had *ed clues, it could have been a week 2, but i much prefer it presented the way it was presented, and slotted in as a week 4 or so. what do you think?