BRAKE JOBS at 38a is clued [Garage offerings, and a phonetic hint to what the black squares in rows 3, 5, 11 and 13 do]. In other words, we should be looking for job titles in those rows, but they’re broken up by black squares. 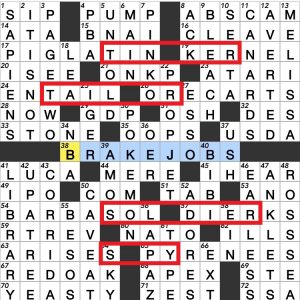 I think I mostly like this, but I do have some nits to pick. First off, I’m a little distracted by the John le Carré connection (Tinker, Tailor, Soldier, Spy is his 1974 spy novel). There doesn’t seem to be any other reference to spying or espionage, so while I see it makes sense to use the title (it’s a four-word well-known phrase that contains only job titles and nothing else), it’s still a little distracting.

Second, is “tinker” really a job? I’m more familiar with the British usage (admittedly derogatory in nature) to refer to an itinerant who may or may not be working. But M-W defines it as a “mender of household utensils” so I guess I can live with it.

Third, there was more than the usual sub-par fill (I mean, aside from DIERKS). Lots of crosswordese like ATA, BNAI, ONKP, OSH, ANO, SSA, PBA, IGER, ESSO, USH, BIBI, BESOS. Oh, and RT REV, too. I did like “IT IS NOT!”, POKEMON, and CAVEAT, but I’m more familiar with a [Commuter plane] being called a “prop job” and not a PROP JET. So the negatives wore me down after a while.

The corners of this grid are quite large, and I’m not seeing a need for that. While all those stacked 7s are impressive, I think they result in too many compromises to the fill. I’d rather see a few more blocks in there to loosen things up and smooth out the fill.

I do like the theme, but I didn’t have the most enjoyable solve. 3.1 stars from me. 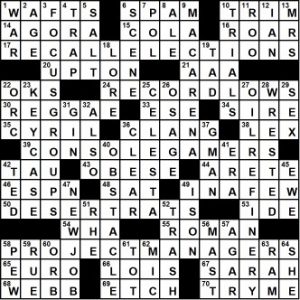 THEME: Five two-unit phrases that have different meanings, depending on whether the first or second syllable of the first word gets the stress. Clued punnily, although the answers pretty well make sense, literally, and are not funny: 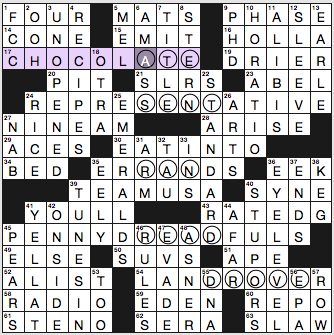 Five past-tense verbs are hidden inside words/phrases that can be objects of those verbs:

Unusual theme. Not super entertaining, but it works and I like that the verb tense is consistent.

I don’t have much more to say about the puzzle, honestly. Fill’s pretty solid (though plural STUPORS and who-ever-says-this EELY irked a bit). 3.75 stars from me. 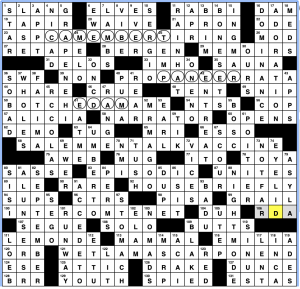 If, like me, you couldn’t quite parse one of the lactose-free answers, it turns out BOTCH-A-ME is one of those Great American Songbook sort of deals.  The remaining phrases made better with added cheese included ASPIRING, PRO RATA, SALK VACCINE, HOUSE FLY, INTERNET, and WETLAND.

This felt a little like a Sunday NYT, fill-wise, but this was solidly executed, so that’s not a ding.  I’m not sure how I feel about breaking La TOYA Jackson’s name into component parts in the grid – I think you either need to fit the complete LATOYA in or not at all.  GRAPE NE-HI felt a little green paint-y, but it’s a nice twist on the typical NEHI fill.  I enjoyed learning that ABBA’s “The Visitors” was their first album to be released ON CD. 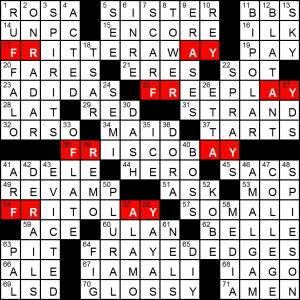 This puzzle played very easy, even for a Wednesday. I spotted the FR/AY pattern quite early, which does give one an edge on subsequent theme entries. The puzzle is tied up with the entry FRAYEDEDGES if you hadn’t sussed that out by then in any case. There are four examples of this before it: (FR)ITTERAW(AY), (FR)EEEPL(AY), (FR)ISCOB(AY) and (FR)ITOL(AY). I seem to recall FRISCO causes natives to recoil in horror. It is clued with regards to DOCKOFTHEBAY though.

Not too much else to note. Haven’t seen [2014 boxing biopic], IAMALI in- or outside of crossworddom before. It has even more helpful letters than ITINA, though! The clue in [Like many magnets], BIPOLAR wisely steers clear of the more familiar though thorny Manic/depressive territory.