This crossword is full of sheep thrills. Each ovine reference is in a rebus. 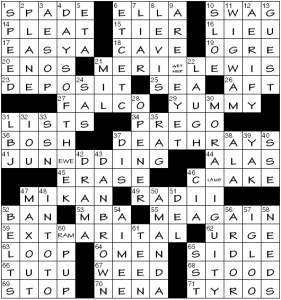 JUNE WEDDING is a bit roll-your-own, and I don’t even care because I love this theme. I love that every rebus is a different word. I love all the other entries. It was fun to solve.

What I didn’t know before I did this puzzle: that AESOP was a contemporary of Sappho. I also did not know that NENA recorded an album called “Made in Germany,” and I’d never heard of George MIKAN. Typo in the grid which I reproduced here. Ugh.

“Gentry” in the title could be re-parsed (I suppose) as “G Entry”. Gs are added to certain familiar phrases. 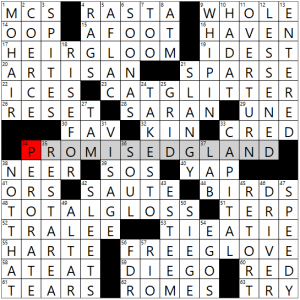 An add-a-letter theme doesn’t break any new ground, but there’s a little bit of humor here. I liked the first and last one’s especially.

I’m not too keen on the title, though. If “Home of the Entry” was a phrase, then it would make sense to throw the G in there. I would have been okay with “Gentrification” as a title with a facetious parsing to “G Entrification”.

Like yesterday, there were a few too many grumbly bits in the fill: SOON AS, WHIP IN, HAD AT, RISE FOR, plural SLEETS (or is it a verb: [Falls in winter]?), and the crossing of uncommon PERORATE [Speak at length] and little-known TRALEE [Town on Ireland’s Dingle Peninsula], and I toured around the Dingle Peninsula once upon a time (there’s a joke in there somewhere, but maybe we’d best leave it be). I did like REST AREA, “NOT THAT!”, ARTISAN, and TIE A TIE. 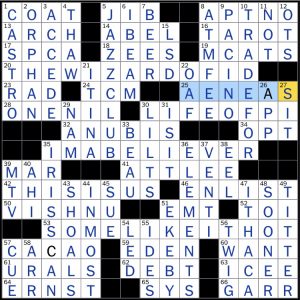 The AHA on today’s NYT Thursday is a little more slight than I usually expect from this specific day of NYT crosswords to be, but that doesn’t mean some of the theme entries didn’t bring a smile to my face.  This one’s pretty straightforward:

We’ve replaced one word in each of these phrases with its equivalent abbreviation form and wackiness has ensued. 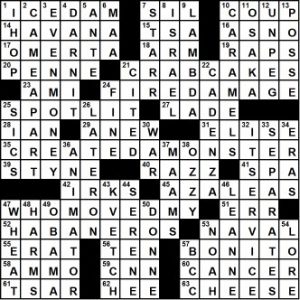 THEME: Dr. Spencer Johnson’s Who Moved My Cheese? was published in 1998 and stayed on business bestseller lists for years. Yet, neither the lead paragraph of its Wiki article nor the Universal Crossword using it as a theme mentions the author by name.

1a [*Aftermath of a white Christmas eave?] ICE DAM–Now, keep your eye on the Edam.
24a [*Insurance might cover it] FIRE DAMAGE
35a [*Made something with unexpected consequences] CREATED A MONSTER
47a [With 63-Across, business fable with two mice … or a hint to a word hidden in each starred answer] WHO MOVED MY
63a [See 47-Across] CHEESE

So, the cheese moves twice, and a two-part reveal tells us about it. Is there more? What is the shock? Feels kinda like two short themes, one a simple, spans-the-phraser and one quipper.

Don’t miss out on 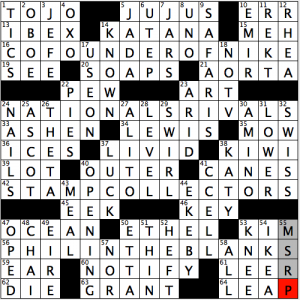 The revealer of this one is at 56a, PHIL IN THE BLANKS [Theme of this puzzle (some respacing required). The three theme entries contained blanks which, when filled in with “Phil” and (sometimes) respaced, resulted in a sensical clue for the answer. Like so:

Not a lot else to say here. Pretty straight-down-the-middle theme, and the four 15s means the rest of the fill is quite short but fairly clean throughout. Plural JUJUS [Magical charms] was new to me. Really liked the clues for SOAPS [Ivory, Coast, et al.] and ART [Collage class]. 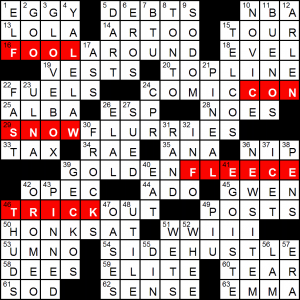 This puzzle is better than your average in a number of ways. The choice of a lively neologism, SIDEHUSTLE, is one. What I really appreciated, was a different take on the directional indicator SIDE. Instead of being at the beginning or end of the word, the thematic part alternates, with each part being against the SIDE. An apt, and different, take on a common theme trope. Also, the informal set of FOOL, CON, SNOW, FLEECE and TRICK has a lot of scope for a variety of phrases.