I had the pleasure of sitting next to Rachel at the Indie 500 crossword tournament, and she’s delightful (as well as being a bioethicist who’s won Jeopardy!). So it’s not surprising that her puzzle is fun. She’s celebrating her birthday this week, so appropriately enough, the theme is centered on her astrological sign, Cancer. 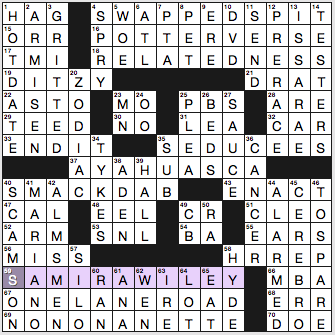 The theme is facilitated by the zodiac symbol for Cancer having rotational symmetry (only three of the 12 symbols do). The little enclosed circles, if you squint, or 2×2 squares in the grid, contain clued 2-letter answers, and read clockwise, they spell out MOON and CRAB, whose zodiacal relevance is spelled out in the clues: [… (or, full circle: lunar ruler of 36-Down)] for MOON, [… (or, full circle: crustacean symbolizing 36-Down)], CRAB. The two halves of the symbol drawn from the black squares are connected by two apt entries: 20d. [Astrological set of twelve], ZODIAC, and 36d. [20-Down sign visually represented in this grid], CANCER.

The puzzle’s also got some stuff that would be welcome in a themeless puzzle, what with those four corners of open grid space. My faves: the POTTERVERSE, gross SWAPPED SPIT, AYAHUASCA, SMACK DAB, the glorious SAMIRA WILEY, a quiet ONE-LANE ROAD (tangent: Team Fiend’s Jim Q is cycling in Britain now, and he’s encountered roads so narrow that they can’t accommodate both a car and a bicycle side by side … so a driver just motors along at 3 mph behind our intrepid uphill cyclist—his daily blog is entertaining as hell), NO NO NANETTE, HOT DATE, ARMISEN, and ISSA RAE. Given that the theme doesn’t entail a lot of content in the white squares, the juicy non-theme fill is much appreciated. 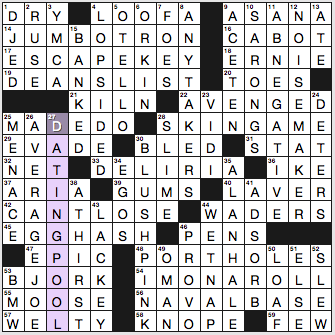 It promises to be a good Friday puzzle when Peter’s byline pops up, and he doesn’t disappoint.

Did not know: 45a. [Hearty breakfast dish that includes potatoes], EGG HASH. That’s a thing? A cursory googling suggests it’s usually a “something and egg hash.” I think Chicago menus tend to call it a “skillet.”

Favorite clue: 17a. [What’s found above a tilde], ESCAPE KEY. I honestly was trying to envision some alphabet in which a tilde appears below a character rather than above it.

This clue—18a. [Orange half of an iconic duo], ERNIE—reminds me. The other day, a guy walked into a restaurant and his hair was shaved off all around the sides and up over the curve to the top of the head. His dark hair up top was gathered into a messy topknot—and the overall effect was that I was looking at Sesame Street‘s Bert from the back. It was a look. 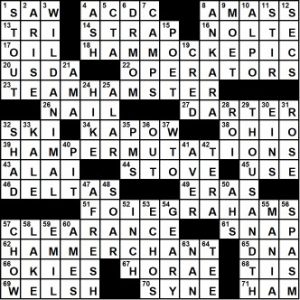 THEME: A bad actor is a ham. This grid contains five hams. Each joins another term–a phrase, a hyphenated word, and three single words–creating things that can be punnily clued.

Thumbs up to WILD ANIMAL.

Not so much to THOUSANDTH. Or to

Three or four–maybe even five–of the above, to glue good stuff into corners, would be understandable. But I found these more distracting than the ham.

THEME: A key word in the title of each of four well-known works of fiction sustains a shuffling of letters:

The non-theme fill is adequate–no real clunkers, but not much sparkle either. We have

ABYSM, which is a good word to know;
MORTGAGE, which looks like two words, but isn’t;
HOSTELRY, another good word to know;
BIG EGO, which is always possessed by some other person;
FLORIDA, source of many a fond summertime thought or memory;
BONING ([Material used to shape a corset ]? Really? Okay, then);
AFL-CIO; and
OPEN-TOE (rhymes with CIO, kinda). 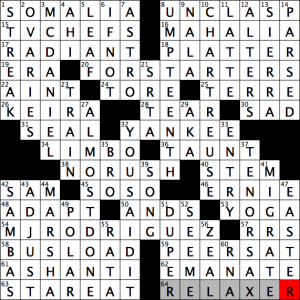 hello, joon here with the write-up of erik agard’s new yorker weekend crossword. this was a fun solve, not too difficult, but as we’ve come to expect from erik, full of terrific fresh entries. the new yorker is one of my regular downs-only solves, so let’s take a look at some down clues i enjoyed:

and i had trouble with these:

looking over the across clues, i’m surprised to see 24a TORE clued as {Past participle of 28-Across}, referring to {Run at top speed} TEAR. this seems like it’s drawing attention to the dupe, instead of just cluing TEAR as {Eye drop} or whatever. i didn’t know {“Pose” actress named after a “Spider-Man” character} MJ RODRIGUEZ, or indeed even what pose was, but that’s on me, and the puzzle was constructed fairly enough that i was able to put it together from just the downs.

taken as a whole, this puzzle is an emphatic rejection of the idea that cis white men are the only group worth representing in a crossword. in addition to the clues i already mentioned referring to beyoncé, MARSHA p. jackson, MJ RODRIGUEZ, and AKA, you’ve got MAHALIA jackson (as played by ledisi in selma), aretha franklin in the AIN’T clue, KEIRA knightley, the trinidadian origins of LIMBO, the singer ASHANTI, john coltrane’s TENOR SAX, and a civil rights clue for BUSLOAD. in fact, pretty much the only white guy in the puzzle is {America’s finger-pointing, mean-mugging uncle} SAM. i appreciate the fact that erik’s puzzles are always full of not the usual people.

4.7 stars from me. have a great weekend!

I liked the theme of the puzzle and enjoyed solving it right up until I was completely Naticked down at the bottom – you can see that I finally gave up and asked the computer to fill in the square. 59d [Mouse in Disney’s “Cinderella”] crossing 64a [Belgian expressionist James]? Really? OK, I guess GUS is the logical male name if you’ve got GU_, but it’s a Disney mouse so who knows if it’s a real name? /end rant

So the theme. Familiar phrases have a B added to the beginning. Wackiness results. 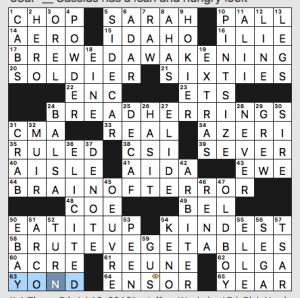 All the base phrases are solid, all the theme answers are amusing, and I like the fact that they all change the spelling of the first word. Very fun theme.

What I didn’t know before I did this puzzle: see above re: GUS and ENSOR. I also didn’t know that the quote was “YOND Cassius…” I always thought it was YON.