Slow going for me today, mainly in the SW, and mainly due to challenging cluing, not to any unfairness in the puzzle, MITA crossing TITUSS notwithstanding.

The theme is nice! Take a well-known two-word phrase where the second word is a singular noun. Pluralize that noun and replace it with a homophone to create wackiness. 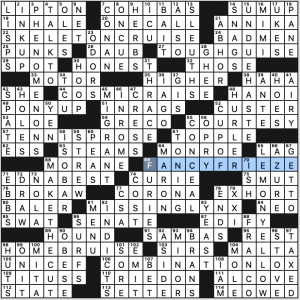 Didn’t mean to end on a down note there because I quite liked this grid. 3.8 stars from me. 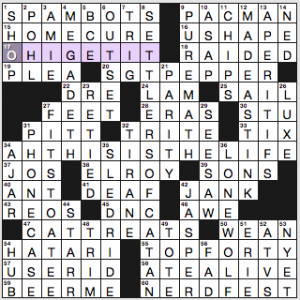 Yep, feels like a Trabucco grid, with fresh and zippy fill. You’ve got your SPAMBOTS, “OH, I GET IT!”, SGT. PEPPER, “AH, THIS IS THE LIFE!” (if only there were also an “Uh…” phrase in the grid!), CAT TREATS (casual, in the language, yet not remotely a common crossword answer—though the singular popped up last month in a Haight), TOP FORTY, mosquitoesque ATE ALIVE (mosquitoes don’t bother me or my mother), “BEER ME,” NERDFEST on the same weekend as the big Comic-Con in San Diego, PHONE CASE, MEGADETH, SETTLERS OF CATAN (good game), LONE WOLF, and MADE A STINK. Good stuff.

That was eight. You’re welcome. 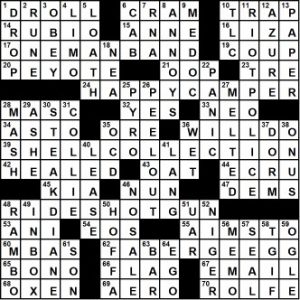 WHAT I LEARNED: That band shell and camper shell are in-the-language things.

THEME: 39a [Beachcomber’s display that’s unlikely to include the ends of 17-, 24-, 48- and 62-Across] SHELL COLLECTION. No? Yes, the four other long answers are a collection that the beachcomber doesn’t have.

Good fill. Density of theme, though, will lead to

Of this quality fill, we’d hope for only 3-4 units. 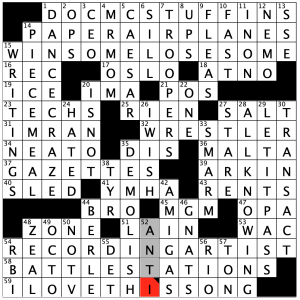 Fun puzzle! With Paolo and Erik’s names in the byline, though, I would expect nothing less. For a Saturday challenger with only a 68 word count, this one solved quite easily. That mainly means that there is almost nothing difficult or crosswordese-y in the grid, which is what made it fun. I did learn a thing or two solving this, as I will mention below, but this was an enjoyable experience. I don’t know how many times these two have collaborated before, but they can certainly continue! 4.6 stars from me. 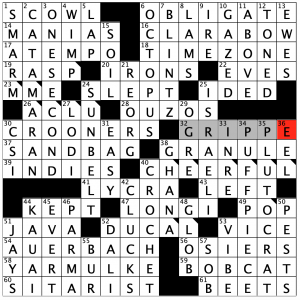 I started out great on this one, with over half of the grid filled in about 6 or 7 minutes, and then ground to a near stop. The upper right and lower left gave me almost no resistance, and I was feeling good! Then reality set in, and I really had to hunker down. I succumbed to a grid check, since I had to finish this puzzle before it was too late to blog it, and that was eye-opening. I thought I knew 26A (see below), but it I went down a wrong path, and it turns out my initial hunch WAS correct. I was dead wrong on my guess of 40A (also see below), but the actual answer does make more sense! (Of course it would!) Brad has made another stellar puzzle, and while this was quite challenging, I enjoyed it immensely. 4.6 stars.