Quick plus: Boswords is this weekend, and already will have happened once this review posts, but you can order the solve-at-home puzzles for a mere $5.

We’re looking for a five-letter word, and there’s something to do with poetry. Main themer clues are lines from poems, and the entries are their titles:

On the principle of: when you have a list of things, make a list of corresponding things, we have the poems’ authors:

Do the names spell out a five-letter word? E-A-T-S-M. MEATS? TEAMS? MATES? METAS? Doesn’t seem quite relevant, except maybe that last one. Let’s study the grid and see if we see anything …

O world! Each poets name makes a “corner” in different parts of the grid, like so: 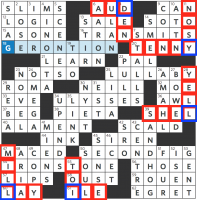 If we take the letters that are in the “corners” of those “poets’ corners,” and arrange them in order corresponding to their poems’ order in the grid, we get: 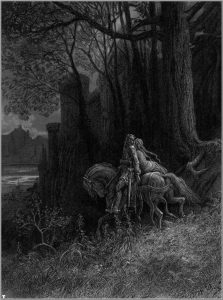 “Geraint and Enid Ride Away,” illustration by Gustave Doré for Tennyson’s Idylls of the King (1868).

Or, IDYLL, which is a five-letter word, and another word for poem. One of TENNYSON’s more famous poems is “Idylls of the King,” which crossword solvers may know because it is often referenced in clues for ENID.

My candle burns at both ends;
It will not last the night;
But ah, my foes, and oh, my friends—
It gives a lovely light!

This entry was posted in Daily Puzzles and tagged Mike Shenk. Bookmark the permalink.