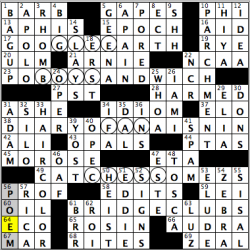 HIYA, people (11D: [Informal greeting])! I hope you all are doing very well and, once again, staying cool in the latest heatwave that’s gripping parts of the country. Today’s clever crossword involves four theme entries in which the circled letters, which span from one word to the next in the theme entry, form a separate word that’s also a type of club. The fifth theme entry, BRIDGE CLUBS, acts as the reveal of what’s going on with those circles (61A: [Groups for card players…and a hint to the puzzle theme]).

Thelma is one of my favorite roles of GEENA Davis in her illustrious career, though I’ll always be partial to Dottie in A League of Their Own and/or Muriel in The Accidental Tourist (5D: [Susan’s “Thelma & Louise” co-star]). Geena isn’t the only leading lady in the grid with TOSCA present as well (48D: [Title heroine of a Puccini opera]). For the second consecutive week, a reference to the TV show Frasier made the grid, and I forgot to mention last week that, other than Niles (David Hyde-Pierce) and Frasier (Grammer), I totally would have remembered EDDIE the dog as well from that show without having to look up the cast (51D: [“Frasier” pooch]). Seeing RHOMB always throws me for a loop, only because I only learned about the shape when it was referred to as a “rhombus” in my elementary school years (3D: [Parallelogram with four equal sides]). There’s a pretty good chance that the first time I came across the word “rhomb” was in a crossword puzzle, despite hearing of “rhombus” when I was nine years old or so. Weird.

In less than a month, I’ll be inside one of my favorite places, Arthur ASHE Stadium, covering the 2019 U.S. Open tennis tournament (31A: [“A Hard Road to Glory” author Arthur]). With being in Flushing, Queens for the event, the question now becomes how many Grey Goose Honey Deuce cocktails will I consume during the fortnight. I know one should not drink while on the job, but…tennis is the one sport where alcohol is served in media dining rooms. At the U.S. Open, there’s Happy Hour every day, with free Heineken/Heineken Light/mixed drinks served. True story!

“Sports will make you smarter” moment of the day: DONS (30D: [Underworld figures]) & NCAA (22A: [March Madness gp.] – Twelve years before UTEP made history by winning the men’s basketball national championship with an exclusively African American starting lineup in 1966, the DONS of the University of San Francisco (“Dons” is the nickname of the sports teams at USF) became the first major college in men’s basketball to sport a starting lineup in which the majority of the quintet was African American: Bill Russell, K.C. Jones and Hal Perry. (Both Russell and Jones are enshrined in the Naismith Memorial Basketball Hall of Fame.) Led by Russell, one of basketball’s all-time greats, the Dons won back-to-back NCAA national championships in 1955 and 1956. As one would suspect given the time period, the team was subject to massive amounts of racial abuse on their road trips, something that Russell, known as much for his social activism than his myriad of championships with USF and with the Boston Celtics, has pointed to in the past in explaining his foundation in being vocal and active against prejudice and racism.

Sports is a whole lot more than esoteric stats, numbers and names that a number of people in the crossword world view as a spot of bother/anathema when solving a crossword, regardless of the gender makeup of  those who consume information relating to sports. Does a sports clue (especially one that’s intended to play difficult) appearing in a crossword skew much more towards a man being able to answer it with less effort? Yes, and I am not a fan of that at all. I’m trying to fix that in my own little world, on here and elsewhere. From my personal experience with sports — from playing sports since I was a kid to becoming a compensated sports journalist to being very active in including more women and the LGBTQ+ community in the makeup of sports journalists — is that, as divisive as the genre can be and sadly remains, sports is almost equally a unifying force in many realms (e.g. the 2019 United States Women’s National Soccer Team’s run to its second successive FIFA World Cup victory), and my time discussing sports on this space is purely intended as one of unification and/or for simply pointing something out that you may (or may not) find interesting for the short amount of time you are on here reading this blog on any given day. There are a number of subjects that appear in crossword puzzles that are not in my wheelhouse, and it is welcome and appreciated and doesn’t come close to ruining my solving experience. For some, coming across a sports clue (or a misleading clue that tests something sports-related) is the ingredient that ended up spoiling the whole gazpacho. I absolutely understand your frustration much more than the previous lines have expressed, but I would understand it much more if crosswords were littered with 5-10 sports-related clues per crossword and you felt as if you were being force-fed.

Is it OK for someone to be progressive in wanting much more balance in gender representation and genre variety when it comes to crossword puzzle construction and be a massive sports enthusiast who lights up when seeing sports clues in crosswords (if they appear in one)? I guess I’m about to find out the answer to that shortly.

Along with telling you about the Dons’ historic and socially-ahead-of-their-time basketball teams of the 1950s, something I’m fairly sure a number of readers coming across this were not aware of before today, I’m pretty sure this screed was inspired by one anti-sports-in-crosswords tweet too many that I read when surfing Crossword Twitter a couple of days back. Those almost always just roll off, so I’m not so sure why this one stuck. Honestly, I absolutely appreciate all of your opinions on sports in crosswords and your perspectives, so this is just me throwing in my two cents…which is not more valuable than anyone else’s two cents on the same topic.  Anyways, here’s a picture of the 1956 USF Dons championship team… 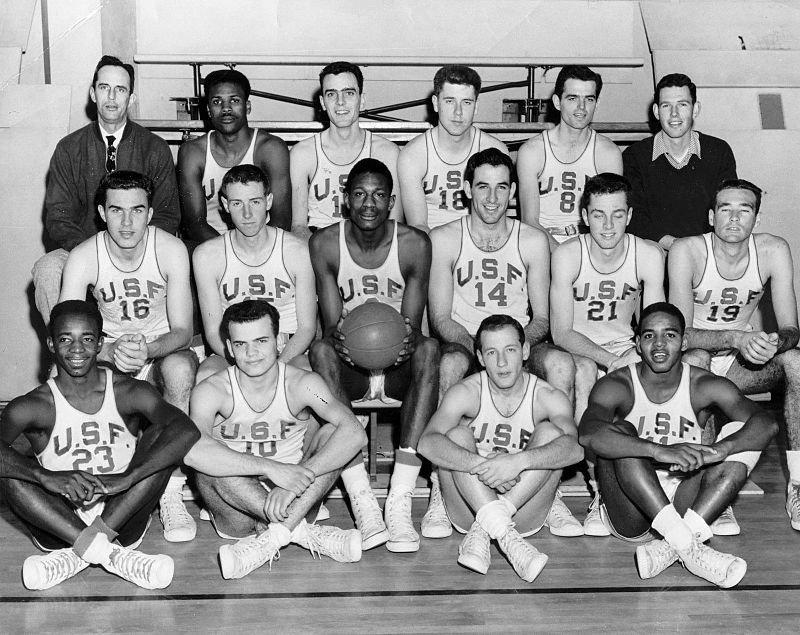 Every time I think I’m getting a sweet deal, there’s always that pesky “Conditions Apply” language. Let’s see what that means for today’s puzzle: 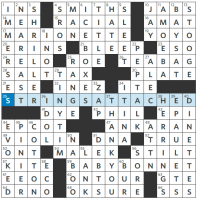 17A: MARIONETTE [Howdy Doody, for one]
19A: YOYO [Toy used to walk the dog]
26A: TEABAG [One in hot water?]
49A: VIOLIN [Hilary Hahn’s instrument]
57A: KITE [Accessory for a Ben Franklin costume]
59A: BABY BONNET [Newborn’s headwear]
35A: STRINGS ATTACHED [What the answers to the starred clues come with]

This theme set is a nice list of things that literally come with STRINGS ATTACHED. I’m not sure I could think of many others off the top of my head. Tampons, for sure. (Also, in a meta side note: check out this week’s Monday LAT puzzle that I also just reviewed. Another iteration on a string theme!) And, even though a lot of the themers in this puzzle are shorter pieces of fill, the full theme takes up 54 squares, so right on par for a 15×15 grid.

Other random thoughts:
– 15A: [Like some discrimination] = RACIAL. Yes indeed, like some (a lot) coming from the highest office in the United States.
– I enjoyed the –ESE / –ITE double in the same row of the grid. Also the ANKARAN / NEAR EAST (is that a thing?) double for Turkey.
– The women represented in the puzzle today? ERINS, INEZ Fabbri, Hilary Hahn, and I, TINA. For the VIOLIN player, I especially appreciated that the constructor (or editor) could have chosen any player and decided to go with a woman. More of this, please! But, what was my ironic thought when I saw that even more women could have been included in this grid? MAN! 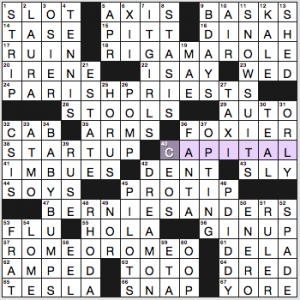 I really enjoyed this theme from newbie constructor Christina Iverson! The revealer is 38a. [With 40-Across, money required to open a business … or a hint to 18-, 24-, 47- and 57-Across], START-UP / CAPITAL, and those other four themers begin with European capital cities:

The START-UP CAPITAL angle elevates this above a puzzle that merely has themers that begin with capitals. You could be persnickety and ding the theme for including one entry that’s a single word, but that would be churlish. Each capital forms part of the first (or only) word, so fair enough.

The rest of the grid’s got some zippy fill, like BABY BUMPS, SNOWSUITS, PRO TIP, GIN UP, P. DIDDY, and IT GIRLS. It’s unfortunate that crosswordese OSIER makes an appearance, and in the 1-Across corner, as that’s not a word that beginning solvers attempting a Tuesday puzzle are at all likely to  know. I’d poke around on graph paper and see if I can improve on the corner, but it’s late and the Netflix won’t watch itself. 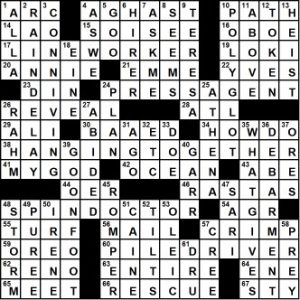 THEME:
Recognized phrases are given punny clues suggestive of clothing:

I dunno. This doesn’t do much for me. Clothing can be in a pile. It famously spins in a washer. Many hang it on a line. Some of its gets pressed with an iron. The theme feels loose, wrinkly. YMMV. If so, convince me otherwise.

This one not so much: 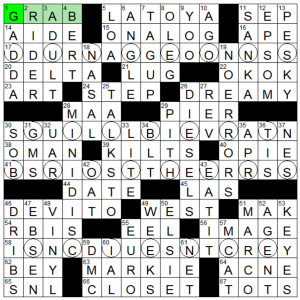 The circles bode something different, and that is certainly what is going on here. Our theme answers are phrases in the mode A & B. Here they are:

These answers certainly appear like a convoluted mess, but the solve actually wasn’t that much different than normal. Once you knew what was going on, it wasn’t too hard to place the answer letters in the right space. I am sure some people may not like this, but I didn’t mind it. Eager to see some of the comments on this one. 4.3 stars from me.

We will stop here! Another Jonesin’ next week! 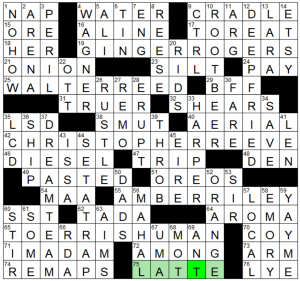 Susan’s name is not in the database on this blog, which likely means this is a debut puzzle! If so, congratulations are in order! C.C. has made several puzzles, and her name is certainly recognizable as probably the most prolific constructor (or “setter”, as the Brits say!) we have in the US right now. So a collaboration with C.C. is a wise move! The revealer at 65A lets the solver in on what is happening, and it was a tad different than I thought it would be!

So I caught on that all of the names had a first name ending in R and a last name starting in R, giving you a double R in the middle, but all of these names hide the word ERR in them, making a little pun on the common adage at 65A. If this is in fact a debut, this is a smashing way to start! Here’s hoping for more from this duo, either as another collaboration or individually. 4.4 stars.