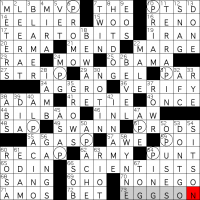 hello and welcome to episode #582 of matt gaffney’s weekly crossword contest, “Punc(tuation) Rock”. the instructions this week are to name a well-known song of 1977. what are the theme answers?

okay, so here’s the thing. i participated in a group solve of this meta with a bunch of folks at dinner after boswords on sunday. i think it’s probably fair to say i would never have solved this solo in a million years, and there are a few reasons why. but we’ll get to those. first, i’m going to talk about the solution.

the two long answers in the grid, TEAR TO BITS and SCIENTISTS, are not theme answers. they have nothing to do with the meta, and in fact, most of the grid has nothing to do with the meta. the meta works like this: there are ten P’s in the grid, which occur in pairs: in five different rows, the first across answer ends with P and the third across answer starts with P. if you reimagine these P’s as ( and ), then the entries in between are:

putting them all together and respacing gives THE ANGELS WANNA WEAR MY. does that mean anything to you? well, it probably does if you know the 1977 elvis costello song (the angels wanna wear my) red shoes. me, i’d never, ever heard of that song, and i’m sure i’m not the only one. the song did not chart in either the u.k. or the u.s. apparently it is a staple of costello’s live sets, for what that’s worth.

it’s hard for me to say this objectively, because 1970s rock is not a subject i know a great deal about. but subjectively, i’ll offer that it’s a stretch calling this a “well-known song of 1977”. on some level, being told that the meta answer is a “well-known” anything and then having it turn out to be 100% unfamiliar is a major, major bummer. it can’t not color my experience of this puzzle. it’s like listening to a long joke whose punchline is in swahili.

every now and then, somebody will ask me about pete muller’s monthly music meta, and i’ll have to explain to them why i actually don’t solve those. it’s not that i don’t enjoy pete’s work—quite on the contrary, he’s a terrific constructor, and when i’ve looked at reviews of his music metas, i’ve often been in awe of his ingenuity. but the fact remains that when the subject matter of a puzzle—and this is doubly true when applied to a meta answer—is well outside of my range of knowledge, it drastically reduces my enjoyment in the solving experience.

okay, that’s all i have to say about the meta answer. what about the mechanics of the meta?

the title provides a pretty solid hint to thinking about parentheses. if there were a list of 1977 rock song titles somewhere, i could imagine going through it and looking for parentheses, and i might have resorted to that if i hadn’t been at the group solve. (the thing is, i probably would have looked at a list of #1 songs, or top-10 songs, or songs that charted at all in 1977, and the answer wouldn’t have been on the list.) the other significant hints, in my view, were the non-article clue for THE and the proper name clue for ANGEL. those were little nudges in the direction of a song title containing “the angel”. again, wouldn’t have helped me, but maybe it would help you if you knew the song.

on the other hand, i think it’s a more interesting that the last few theme answers don’t bear any real relation to the words of the song title. SWANN AWE ARMY going to (S) WANNA WEAR MY is a much more dramatic shift in parsing than THÉ ÁNGEL going to THE ANGEL.

the biggest hint of all was, unfortunately, an anti-hint. what is going on in the top row of the grid?

these two all-initialism answers bracket the first real theme answer THE. now, the meta constrains 1-across to end with P and 10-across to start with P, and to contain no other P’s. but why MLB MVP? this is a highly undesirable entry in my mind, for the simple reason that there is no such thing. NFL MVP is a thing. NBA MVP is a thing. NHL MVP is less of a thing, because they have a different name for it (the hart trophy), but at least the hart is awarded every season to the most valuable player in the NHL, so if you had NHL MVP in your grid and you clued it as {Hart Trophy recipient}, i don’t think people would accuse you of making stuff up. but MLB does not award an MVP. the american league and national league award separate trophies every year, honoring the most valuable players from those leagues. so the fact that 1-across in this puzzle was MLB MVP seemed to me (and others) to be screaming “this made-up entry is highly constrained by the theme!” and then it just … wasn’t. i don’t get it.

the rest of the grid is not bad. i didn’t immediately see why it was necessary to have an 82-word grid, but the inability to use the letter P except in particular spots is a sneakily restrictive stipulation. it’s also true that when your theme answers aren’t long, it can be hard to keep the grid’s total word count down.

that’s all i’ve got this week. i hope your experience of this puzzle was happier than mine!