Theme: Common phrases get a punctuation makeover. The first word is roughly synonymous with “verbalize” and the second word becomes something that is spoken. 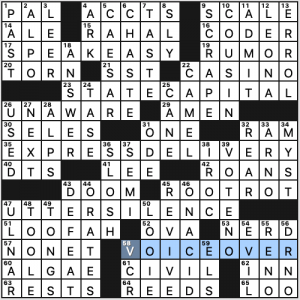 At first I wasn’t too sure if I liked this theme, but once I realized the second word should be in quotation marks, I liked it a whole lot better. At that point, each entry felt a lot more lively and fresh and fun.

Not a whole lot of sparkly fill besides, but I do like ROOT ROT, VOTE NO, and ON ACID. I don’t get tired of seeing LOOFAH either. But I am oh so tired of SST.

I quite enjoyed the theme on this one. 3.7 stars. 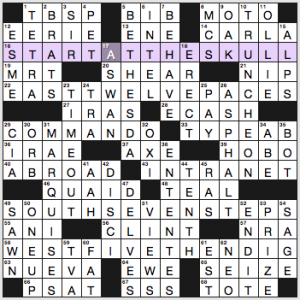 Well, you’d think the mighty New York Times might have a way to tell us right on the puzzle page that the puzzle contains something visual that doesn’t display in the .puz file, but no, they let you just download the puzzle and be perplexed. The theme entries fill in the blanks in a pirate tale of instructions to find buried treasure, starting with 16a. [“Arr, matey! So ye seek buried treasure to fill yer ship’s hull? Well, the first clue is easy. Just ___”], START AT THE SKULL. The .puz has no skull, of course, but the puzzle notes say “In the print version of this puzzle, the first black square in the top row contains an image of a skull.” (I only found the notepad after finishing the puzzle and going to the kitchen for a snack.) The subsequent instructions are to go EAST TWELVE PACES, then SOUTH SEVEN STEPS (why not stick with one word, either PACES or STEPS?), then WEST FIVE, THEN DIG. Those moves take you to the X in the center of the grid, where AXE crosses OXI. I’ll bet the payoff is disappointing when you dig in the middle of a crossword grid and expect to find buried treasure. (Shorter version: “Look for the X and dig there.”) The theme played like a big nothing for those of us using the .puz format.

3.25 stars from me. I’d have liked a theme that doesn’t require an added visual gimmick, and less fill in the MOTO ECASH IRAE SSS vein. 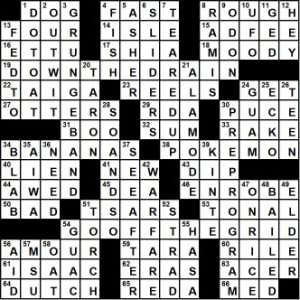 THEME: … Well, here is the reveal:

That’s a lot of theme.  And it’s clever.  Let’s see if it was worth it. Other stuff, good and not-so-much (imho, of course):

Across
15 Pay for play? AD FEE
16 Rebuke to Brutus ETTU
22 It covers most of Canada TAIGA
29 Food label amt. RDA
45 Anti-traffic org.? DEA
46 Completely cover ENROBE
51 Peter and Catherine were great ones TSARS
53 Like Cantonese TONAL
66 ___ school MED
Down
1 Perform with precision DO TO A T
2 Defeat in a mental battle OUTWIT
3 Nirvana, e.g. GRUNGE BAND
6 Beefy happy hour orders SLIDERS
7 Began to cry TEARED UP
9 Use in excess, informally OD ON
11 Test for a dropout: Abbr. GED
13 Gave, as kibble FED TO
20 Egerton of the “Kingsman” films (RAN TO anagram) TARON
21 Pie order option A LA MODE
28 Old what’s-his-name SO AND SO
30 Code in advance PRE-PROGRAM
35 Audio equipment brand AIWA
36 Want’s relative NEED
37 Attend to SEE AFTER
42 Armed conflict WARFARE
47 How food from a wok may be served ON RICE 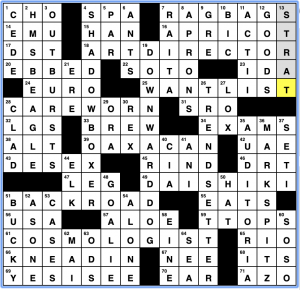 Today’s AVCX is a constructing debut by Steve Faiella – congrats, Steve!  It’s a healthy 15×15 grid with a 3/5 difficulty rating.  Let’s dive into the theme going on in “Diving Spots”:

So, this is a fine theme, and in another venue I’d rate it more highly, but it lacks the usual extra level of creativity I associate with the AVCX’s puzzles.  This feels oddly standard and like something I could see running in the NYT (which is good news for Steve – keep constructing!), which isn’t what I expect from Ben Tausig and co.

There’s some great choice of fill running across the grid – I particularly liked APRICOT, ART DIRECTOR, CAREWORN, OAXACAN, DAISHIKI, COSMOLOGIST, and KNEAD IN.

I love the rise of pop star and (former) America’s Next Top Model host Rita ORA as crossword fill. She has some catchy songs!

May the rest of your Wednesday be as smooth as solving this puzzle was for me. 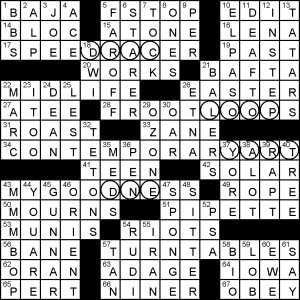 TURNTABLES is a nifty piece of word play; here, words that go with “___ table” – CARD, POOL, TRAY and END – are hidden backwards in four long across phrases. I do wish the way they were hidden was more consistent, some span the two words, some are only in the second word, it makes the impact of the theme rather less. That said, SPEEDRACER and FROOTLOOPS are good choices, though CONTEMPORARYART and MYGOODNESS felt more run of the mill. Is Kelloggs also hyping unicorn Froot Loops in the US? Some terrifying pinky colour. I guess I am not in the target demographic though.

MIDLIFE/LEST make a perfectly good pair, but I would’ve gone for MIDWIFE in that square? Personal choice? Otherwise, I did enjoy some of the choices in the medium-range fill particularly BAFTA, PIPETTE and stacked pop hits MMMBOP and YOUARE (which is the full title).

My big unknown of the day? GUNNAR Nelson. I saw [One of the Nelson brothers of 90’s pop] and thought “I know Ricky of 50’s pop, but it’s not him…” Turns out Matthew and Gunnar Nelson are his twin sons. They had a short string of hits in the early 90’s that seem to form a lacuna in my 90’s music knowledge. It seems like pretty standard pop formula, not unlike their father was…