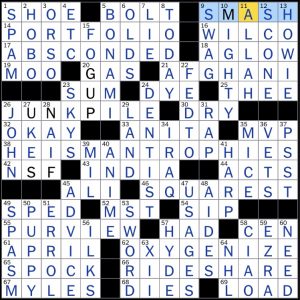 It took me more than a few minutes to figure out what was going on with the theme clues in Patrick Merrell’s latest for the NYT.

I’m not quite sure how to classify the theme on this one.  Each word contains that consecutive pattern of letters in order, but there’s one answer where a letter appears out of order from the clue (the initial S in SQUAREST).  The answers here are interesting choices, but I wish there was a little more connective tissue behind why these words were chosen, otherwise this plays like a themeless with some eccentric clues for four of its entries. If that’s all that’s going on here, I’m underwhelmed to say the least.

Elsewhere in the fill: PORTFOLIO! RIDESHARE! SPAM facts (it was invented in 1937)!

I’m much more familiar with WILCO as a relatively prolific indie rock band than I am with it being “‘Got it, I’m on it,’ in radio lingo” per 16A 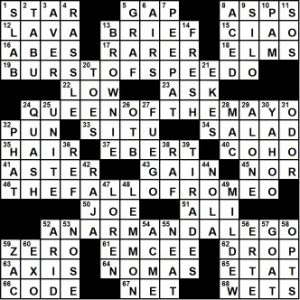 THEME: So, we’ll be seeing O’s appended to recognized terms:

13-14-14-13. That makes it tough to keep the fill stellar. Let’s look at the good and not so much, the rest being average and fully acceptable:

“Finally, I really liked many of Jim’s new-to-the-NYT-xw entries, but BESTIE made me pause. I read a lot of middle grade and young adult lit for research, and I personally don’t want this to open the floodgates to such similar vocabulary as ADORBS (adorable) and TOTES (totally). Feels beneath the NYT.” – Jeff Chen, XWord Info, Dec 14, 2014, regarding my crossword puzzle of the day.

“Beneath the NYT”, eh? But not beneath the WSJ, hmm?

I kid, of course. I’m a big fan of Jeff’s amazing work both in puzzledom and in the fact that he recently got his first novel published. How cool is that?!

But on to today’s grid, BESTIE notwithstanding!

Jeff’s found words that are composed of two parts: the outer (circled) letters spell out a synonym for “friends” and the inner letters comprise a completely separate word which takes the clue. This is revealed to us at 37a [With 39-Across, a description of the answers inside 17-, 24-, 49- and 60-Across] BETWEEN / FRIENDS. 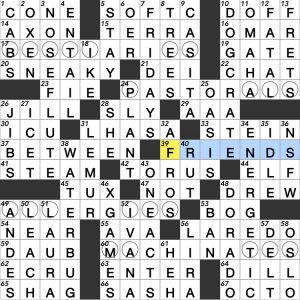 A nice set, eh? I especially like the last find which is a nice contrast to the rather bland ERG. But I really like the theme concept as a whole, and both the title and revealer are spot on.

As per Jeff’s usual, there’s plenty of lively fill to sink our teeth into, such as DOG CRATE, WATERBUG, ENERGETIC, FRIDAYS, DORADO, SNEAKY, LAREDO, and NOSE FLUTE [Wind instrument common in Polynesia]. I’ll have you know that my ancestors come from Micronesia, not Polynesia and we use our noses for smelling things, not for blowing snot onto musical instruments. Seriously. You have a mouth. Use it!

Only a few clues of note:

Nice theme and puzzle with fun fill throughout. 3.8 stars.

Peter sends us into the annual FB hiatus with a chewy themeless. I was surprised when I looked at the time – I thought it took me much longer.

1a was a gimme: [“I’ll have what she’s having” in “When Harry Met Sally …” was said by his mother] is ROB REINER. I filled in that corner fairly easily and then came to a screeching halt. I don’t watch “The Voice” (10d). I was listening to music in the 1970s and 80s so I know that [Lead singer of the Pretenders] at 14d is Chrissie HYNDE, but the rest of that corner did not yield.

I dropped in words here and there until I got a decent foothold in the central east portion of the puzzle. It was a worthwhile challenge. 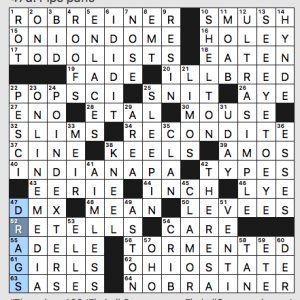 What I didn’t know before I did this puzzle: the aforementioned Voice coach is Blake SHELTON. Jimmy Stewart was born in INDIANA, PA (but I know what year he graduated from college!). DMX had his first five studio albums debut at #1. Brian ENO recorded an album called “Thursday Afternoon” in 1985.

I leave you with Chrissie. 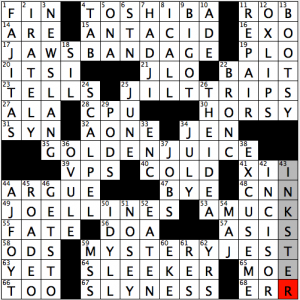 Brendan claims this is a repeat of an old puzzle, but I can’t find any records of it on his site or on Crossword Fiend. So let’s do a quick recap, shall we?

The title, “Softening Up,” refers to some hard “G” sounds becoming soft “G” sounds, to punny effect. Like so:

Classic BEQ: Lovely theme entries where the spelling of the affected word changes every time, funny theme clues, etc. etc. There are some fun J words necessitated by the theme, my favorites being A.J. FOYT and FAJITAS.

Fun stuff! I certainly didn’t remember solving this one, so it was new to me :) Until next time! 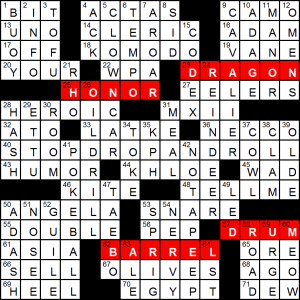 The theme is definitely more creative and intricate than most we see at the LA Times. The instructional STOPDROPANDROLL is in the centre, and four answers continue on below, with the bottom part being a type of roll: DRAGON(ROLL), HONOR(ROLL), DRUM(ROLL) and BARREL(ROLL). All four are quite different, and the dragon roll was a particularly evocative touch.

The rest of the puzzle was definitely trying to stand out, with POKEBALL, KHLOE and CLOWNCAR. I do wish the EELERS/MXII area had been redone because neither of those are answers that should be in a puzzle without dire need.