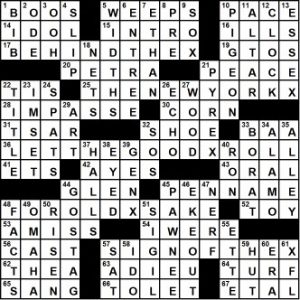 THEME: In spots where the word times otherwise would be appropriate, Brand X has been placed: 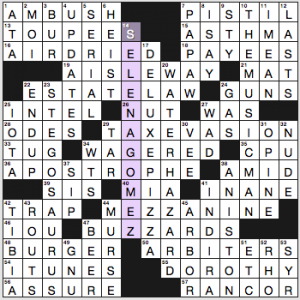 At first I thought, Whoa, Andrew has strayed from his usual stagger-stack layout. And then I realized the trio of staggered 11s run Down rather than Across this time, so it’s just as expected: a stagger-stack in the middle, lots of interesting fill, and super-fresh clues.

Fave fill: The ESTATE LAW/TAX EVASION pairing, MEZZANINE, BUZZARDS, RANCOR, STEGOSAURUS (Illinois has no state dinosaur, but we do have a state fossil, the Tully monster), MURSE (that’s a man/purse portmanteau), SELENA GOMEZ, a golf WATER HAZARD (the [Green protector] clue mystified me till my husband explained that golf is a battle between the player and the course, and the water hazards are protecting the green from its enemy, the golfer), and THE MUSIC MAN (frankly, 76 trombones is at least 70 too many). 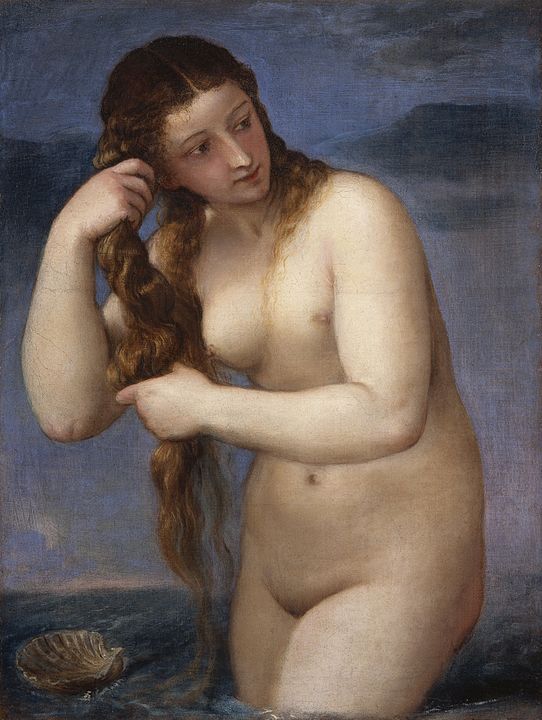 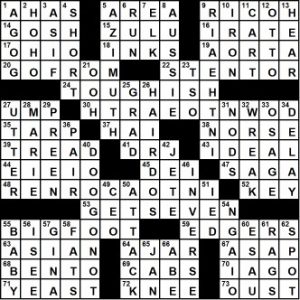 THEME: Theme answers start with back or up, depending on whether they are Acrossers or Downers. And, of course, they go in reverse.  To wit (and see answer grid):

Other stuff, pro and con, includes:

I started a thread in the review of last Saturday’s puzzle. I mentioned a vocal element in the solving community in my geographical area that

Me? I want the Universal Crossword to be liked and consumed by this group, who do not see themselves as rebels. They do not like seeing something like RIA EHT NI in their solution grid. And I bet it’s fair to say that, as is the case with my local paper, Universal is often paired with the NYT, so that solvers can rely on early-week difficulty level from at least one puzzle per day.

It’s a moot point by now, I fear, as these folks, whose complaints to the local paper are passed along to me, are going to lose their hard-copy paper in the near future. Kudos to the paper for a compensating move–it is giving iPads to subscribers and providing basic instructions on how newbies should use them to access the lay-out version of the paper.  If this group, which I estimate statewide to number in the thousands, get together with iPads, they could opt for the Thomas Joseph 11 x 13, as it, the Universal, and a couple others are available in the online edition.

This puzzle today is probably a debut for Fred Ohles. It undoubtedly represents hours of work. And there is nothing wrong with the puzzle per se. It’s cleverly conceived and competently executed. The non-theme fill is not bad at all.

Although, after several hours, I still don’t get the significance of the diagonal generator entry. 2.5 stars.

O tempore! O mores! All the theme answers are phrases that start with “O” and are re-divided to start with “O,” as if they were odes. Wackiness results. 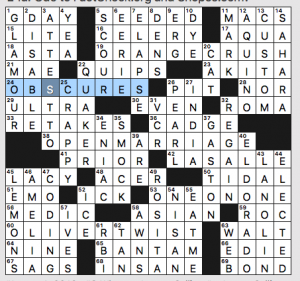 All the base phrases are solid, all the resulting theme answers are funny, and I’ve never seen anything like it. So fun.

As we’ve come to expect from the Inkubator team, there are lots and lots of women in the clues and the grid. Nicole Kidman and Kylie Minogue as the representative Aussies for 1as G’DAY; Serena Williams; PEARL Buck and Bailey, Corazon AQUINO, the original ENIAC programmers, ROSITA the Muppet, AMELIA Earhart, Alexandria Ocasio-Cortez, Mia Hamm, Alice in Wonderland, EDIE Falco. Love the representation of WOC as well.

What I didn’t know before I did this puzzle: that St MARK is represented by a winged lion and that the yellow in Mauritania’s flag represents the sands of the SAHARA. 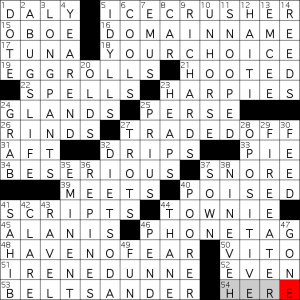 hi, joon here with the writeup of patrick berry’s new yorker weekend crossword. did you know that this is a 66-word grid with zero, and i mean zero, abbreviations? there are only four three-letter words in this grid, and they are all common words. no obscurities, no awkward inflected forms, no partials, no weird foreign words… just a whole bunch of familiar words, phrases, and names. from a technical standpoint, about the only negative thing you could say about this grid is that there are a bunch of places where two plurals share their terminal S. that makes things a little easier on the constructor, but the payoff in this case is a ridiculously smooth grid and fun solve. the fill in this puzzle is so clean you could eat off of it.

my downs-only solve meant that i actually did not see any of the four clever ? clues, all of which were in the acrosses:

oops. i guess this happens sometimes. you know what they say: {“If you obey all the rules, you miss all the ___”: Katharine Hepburn} FUN.

i thought i was going to crush this puzzle when i had all but two entries filled in within a few minutes. but i got pretty seriously stuck on the side-by-side pair of 3d {Required wear for some labs} LONG PANTS and 4d {Clearance-sale descriptor} YEAR-END in the upper left corner. i’ve worked in a lot of labs, and many possible answers came to mind: safety goggles, lab coats, closed-toed shoes, hard hats, radiation badges, … LONG PANTS was not going to come to me. i did spend some time considering whether “labs” meant labradors (because crosswords), and what dogs might be required (!) to wear in some cases. and for YEAR-END, i was thinking about descriptors of the items for sale in a clearance sale, rather than a descriptor of the sale itself. so that took a good long while to piece together. i had EGG ROLLS, GLANDS, AFT, and BE SERIOUS, giving ___G_A_TS for 3d and ___R_N_ for 4d. what broke it open for me was trying -ING for 4d. despite the fact that both of the letters (I and G) i was putting into the grid turned out to be incorrect, this gave me RINGS at 26a, which was enough to suggest LONG PANTS, then OBOE, and finally i was running the alphabet at 1a DAL_ to finish _EARING or _EERING. i could only come up with DALE, DALI, and finally DALY; putting the Y in made it easier to see the two errors.

that’s all from me. lovely puzzle as always. if you solved it with the across clues, you probably had an even better time than i did, but i enjoyed myself quite a bit anyway. have a great weekend!

Sorry this is so late! Let’s get right to it. The theme is cricket, and all the theme answers are 15-letter grid-spanners. 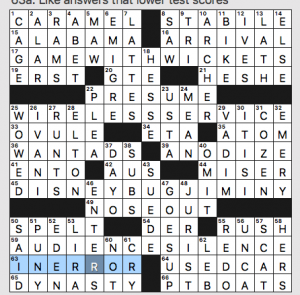 I enjoyed this theme! It was original and fun to solve, and all the entries seem solid to me. I suspect some might quibble with DISNEY BUG JIMINY but I liked it.

What I didn’t know before I did this puzzle: that DYNASTY was the top-rated TV show of 1984-’85. I was in residency. I was not watching TV.

I leave you with DISNEY BUG JIMINY.