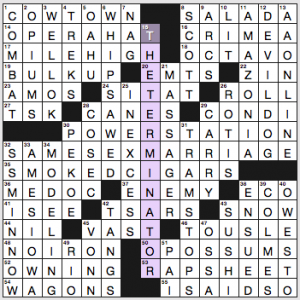 Mostly a nice 66-worder here, with highlights like that Canadian COWTOWN, SAME-SEX MARRIAGE, the S.S. MINNOW, WHIPSAWED, THE TERMINATOR (there’s a new Terminator movie coming up starring Linda Hamilton, picking up where she left off several movies back), a DEVIL DOG, and the interesting but new-to-me A.A. ONLINE.

There were also some blah bits, like SIT AT, I SEE, TSARS, incomplete-without-“because” I SAID SO (the second “I” phrase), plural OPIUMS, and Mount OSSA.

Quick write-up this time, my apologies. Lots of family activities going on this weekend.

Our theme is hobbies that have been slightly re-defined. 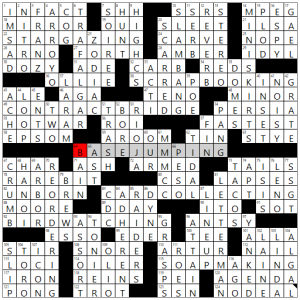 Nice theme. These all worked for me except the bridge one, and I’ll just put that down to the self-enforced bridge gap in my knowledge base. Plus the fact that it’s a non-gerund, unlike the others, makes it an outlier.

There were the usual kludgy bits, particularly MMMCC, TENO, and EDER, but I mostly worked around these, and it turned out fine. 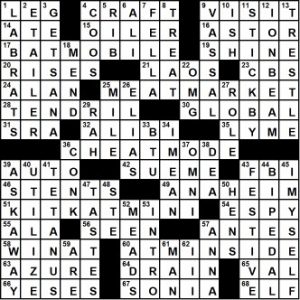 THEME:
ATM is … well, look at the reveal:

And, now, look at what is inside the other theme entries (what could it be?):

Clever. Entertaining. And, with five theme entries using just 47 letters, this should yield some nice stuff elsewhere. Let’s have a look: 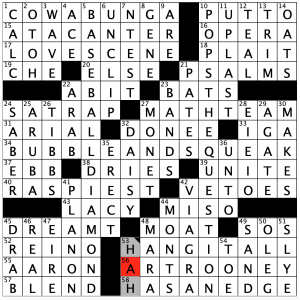 This was a rapid solve for me; I have done several Kyle Dolan puzzles in the last year or two, so his style seems comfy to me at this point. I count 72 words, and while there is a one or two toughies in there, most were in my wheelhouse. Some of these entries brought a literal smile to my face! 4.5 stars from me.

Some of those “smile-inducing” entries:

I could go on, but I will stop. Great puzzle, Kyle! 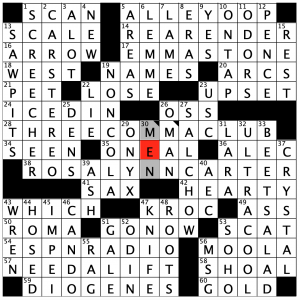 I thought I might get a record time at first on this one. I don’t remember exactly what it is; I think I solved one of these Stumpers in around 8 1/2 minutes once. I will have to check the archives and find out! But this one fell in under 12, so I will take it. I definitely learned a new term or two, but a few of these answers were easy for me. The NW corner was the hardest, while everything else didn’t seem too bad. A solid 4.3 stars for Stan’s puzzle this week, and with an easier one here, it bodes for a torturous one next week. I better start on it now!

A few highlights for me: