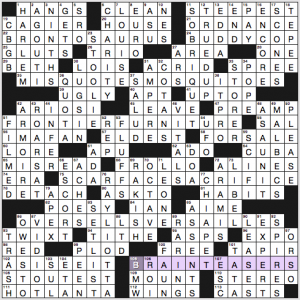 The fill is pretty good, probably in part because the grid isn’t overloaded with theme entries. Four long ones, two shorter ones that make a full themer. (And in part because Will N. is really effing good at constructing crosswords.) I like the crossing portmanteaux, VIDIOT and HOTLANTA, along with a musical performer’s SET LIST, RAY LIOTTA, SOBRIQUET, CHIA PET, and MALBECS. There’s a little bit of junk, like roll-your-own STORER and crosswordese EDDA, but overall it’s solid. 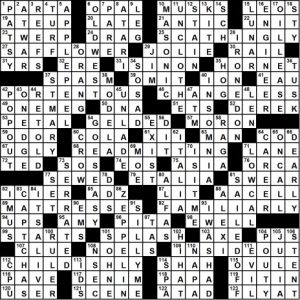 I didn’t think I was going to finish this puzzle, let alone grok its theme. But, as I was writing my commentary for 25a, …:

This is a really clever theme. I think. It took my brain a while to absorb it. It’s similar to an anagram theme. Similar also to a scrambled letters theme. Give Stu credit for finding these words that have two words within them, one with consecutive letters and one with the remaining letters. Wow!

Other stuff of good note:

There are a few items I’d rather not see, UNLADE and SOHNE being the leaders. A few short words are duped in phrases:

But, you know what? None of that bothered me during the solve. And that’s important, right? 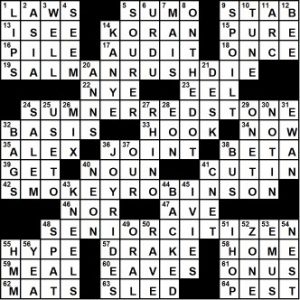 THEME:
Three celebrities, whose initials are S.R., which is intended to suggest Sr., abbreviation for senior, as per the obligatory reveal:

Other answers of note:

I usually love C.C.’s puzzles. I did not love this one. For one thing, I couldn’t figure out the theme. I had help from our esteemed blogmistress, and I was left with the feeling of “is that all there is?”

I noticed on my own that the long Downs were two-words phrases in which the second word started with “B.” I did not realize that each contained the word TAB (read top to bottom) and I didn’t notice the revealer at 118d: [Something flipped after a walk-off home run … and in the nine longest Down answers]. Flip TAB and you get BAT. BAT flips are a hot topic in baseball these days. Not everybody likes them. 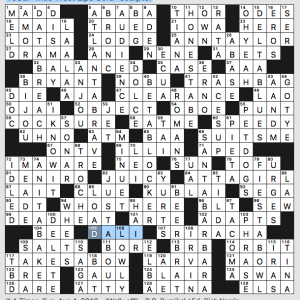 I  might have liked this better if I’d found it on my own, or maybe not. I didn’t need to understand the theme to solve the puzzle correctly and it didn’t involve any real wordplay.

What I didn’t know before I did this puzzle: that Salvador DALI created the “Mae West Lips Sofa.” Apparently this was in collaboration with Edward James. 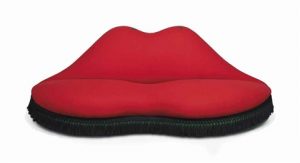 Let’s supersize it! Evan tells me this is the biggest crossword he’s ever constructed. It wasn’t particularly challenging; it was a lot of fun.

Each theme answer is the book title, and the circles spell out a message. 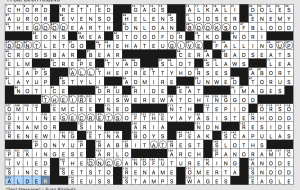 It’s a straightforward theme without wordplay and I still enjoyed it. I appreciate the diversity in the authors of the books and it’s a cool quote. 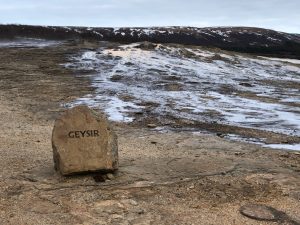 What I didn’t know before I did this puzzle: I’d never heard of auto racer FABI Teo.