I think we’ve seen something like this before. I don’t have access to the theme databases nor do I have an eidetic memory. Anyone know? I figured out the theme with the first theme answer. I still enjoyed the puzzle – it’s a fun, accessible Monday theme, and it’s well-done.

All the theme answers run vertically. 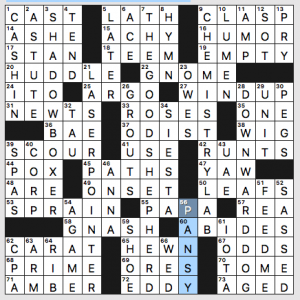 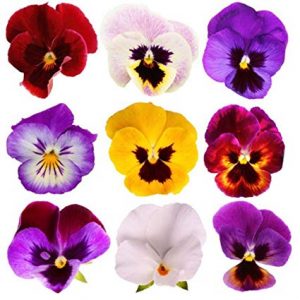 What I didn’t know before I did this puzzle: never heard of the Matt Damon movie. 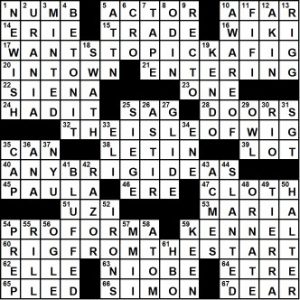 THEME:
H and T are removed from *ight words in familiar phrases:

Other entries that caught my attention include:

IN TOWN, ENTERING, LET IN, PRO FORMA, NEWISH
BET ON IT, HAD IT, AWARE OF, SLANTED, MMII.

This is a fun, competently constructed and nicely clued puzzle.

This puzzle has everything … quite literally! 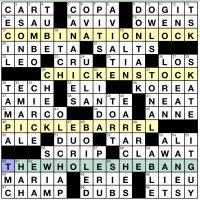 17A: COMBINATION LOCK [Wall safe access]
29A: CHICKEN STOCK [Base for many soups]
46A: PICKLE BARREL [Classic country store container]
60A: THE WHOLE SHEBANG [What the ends of 17-, 29- and 46-Across figuratively compromise]

LOCK, STOCK, and BARREL is indeed THE WHOLE SHEBANG. I like it. The theme is straightforward for a Monday but feels like a playful embracing of such a fun phrase. The fill was largely clean and quick to plunk in. SANTE and DOG IT were tougher for me, but not ungettable.

My only main qualm with this puzzle was in how olde time-y it felt. Clues / fill like [Tea service carrier], DOG IT for [Shirk work], CECIL DeMille, [Old Metro automaker], [Cash alternative] for CHECK, [Computer message] for EMAIL, and PICKLE BARREL as a [Classic country store container] made the puzzle feel like it was from a different ERA. References to Manilow, the Bible, the Berlin Olympics, and a [Country divided in 1945] didn’t help. Maybe the only bits of “modern” touches were IN BETA, ANNE Hathaway, ETSY, and Lena OLIN. Throw in Sophia LOREN and there feels like some correlation here between fresh fill and including women in puzzles to consider.Ed

Due to a mix-up, we inadvertently reviewed the wrong puzzle here. A correct one will be posted shortly. 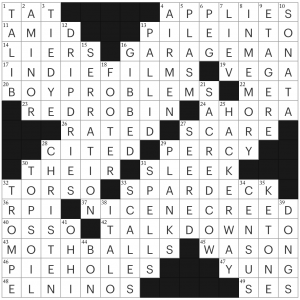 KAC is up for this Monday’s New Yorker puzzle, and as always with him the grid is beautiful.  I especially like the tribute to the Satellite of Love running down diagonally.

Enough ogling the grid, let’s dig into the fill: 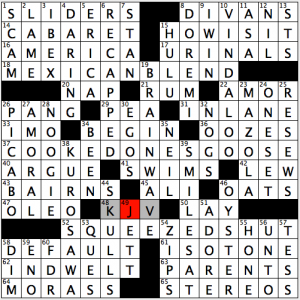 This grid is an obvious pangram. The central 15 is COOKED ONE’S GOOSE [Ruined another’s chances], but MEXICAN BLEND and SQUEEZED SHUT do a lot of the heavy lifting Scrabble-wise, as does KJV with the brutal clue [Alternative to the Douay-Rheims: Abbr] (requiring you to know the Douay-Rheims is a Bible). Wouldn’t have been so tough except for the, again, brutal clue on the crossing with JETT [Title thief played by Carla Gugino in a Cinemax series]. That series premiered in June 2019, and I had not heard of it until this clue.

Speaking of brutal clues, [Pulse in a kitchen] for PEA! As in this sense of pulse. Jeez.

Lots of post-solve Googling here, which is unusual for me. Even so, not too much of a struggle to solve.

Note: I inadvertently posted a review of the wrong puzzle here at first. The following is the correct puzzle for today.

I’m an idiot for not figuring out the theme of this grid before finishing the solve. I guess I was going for speed and wasn’t expecting such a straightforward theme. 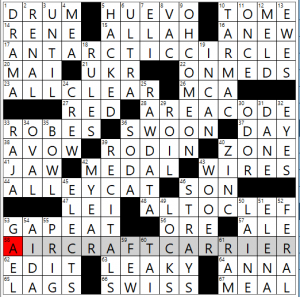 So yes, the theme is very straightforward (two word terms starting with the letters A and C), but that’s as it should be on a Monday. The entries are solid and the clues are good, making this a good entry-level grid.

“OH COME ON!” (great) and RECITALS (so-so) are our long Downs with RAW DATA (strong) in the backup position. I also like ON MEDS as an in-the-language phrase.

MY EAR gets a poetic clue [“A voice there is, that whispers in ___”: Alexander Pope], but always think it should get a clue like [Van Gogh exclamation?].

And that’s all I have. A solid, straight-over-the-plate grid. 3.5 stars. And now, as promised…