Coming soon! Lollapuzzoola, the best crossword tournament to occur on a Saturday in August (Saturday, August 17, to be exact) is sold out of regular table seats, but you can still register for a “clipboard seat” (I think this means you sit in a chair and bring your own clipboard) here, where you can also sign up to solve at home for slightly less of a financial outlay. Speaking of solving at home, since that’s how most of us solve (I’m also partial to solving at bars; it’s a great way to guard against being hit upon), you can still get this year’s Boswords puzzles to solve at home (Fun Facts: 22.2% of Boswords constructors are Fiend bloggers; 100% of Fiend bloggers who cover weekly metapuzzle contests are Boswords constructors). 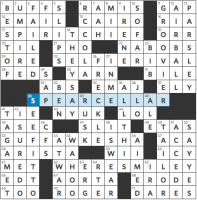 As I was finishing this grid with its nonsense-y themers, I suspected the meta mechanism might have something to do with female pop stars … SPEARs, KESHA, MILEY … but no. With a metapuzzle, after a grid solve, I’ll often print just the filled grid to get the ol’ brain juices a-boiling … and I needn’t’ve bothered, as it jumped out at me immediately:

The pop stars alluded to in the three last themers were a nice misdirect, but what we were really looking for is the last names of five people named GUY:

Count ’em: one, two, three, four, five guys named GUY. Our American fast-food restaurant is: FIVE GUYS, headquartered in Matt Gaffney’s resident state of Virginia, and recently the fastest growing restaurant chain in the US (there’s likely one near you).

Cookie Monster is not a particularly gracious game show contestant: