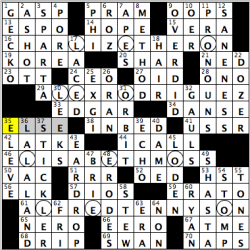 Good day, everybody! Here is hoping that you all are doing well. Today’s crossword puzzle came in like a lion and out…like a lion still! Each of the four theme entries ended up being the name of a celebrity who also belongs to the fifth sign of the zodiac, given their birth dates. In addition, the circled letters within each theme entry end up spelling out the word LEO.

There are definitely times when I do not mind acting much younger than my age, so seeing IN BED made me think of the times when people would crack jokes by finishing people’s sentences with “in bed” (38A: [Still snoozing away]). “This crossword puzzle was a joy to complete…in bed!” Speaking of things in bed, there’s DOZER in the grid to complete the somnolent elements in this grid (22D: [Light sleeper]). Do formal parties still feature punch bowls, allowing the possibility of LACED drinks to be present (17D: [Like spiked punch])? Outside of seeing them in movies, cartoons and the like, I might have seen an actual punch bowl in use one time at a party I’ve been to. Nowadays, we all just spike our own drinks and bring them to the party! Much more sanitary that way!

Probably favorite fill for me was STICKLER since I’m pretty much that when it comes to a lot of aspects in life (37D: [Purist]). Seeing EDGAR right underneath Alex Rodriguez immediately made me think of one of A-Rod’s former teammates while with the Seattle Mariners, Edgar Martinez, who just was inducted into the Baseball Hall of Fame last month (33A: [Mystery writer’s award]). I could talk about Edgar Martinez and how his series-winning two-run double in the decisive Game 5 of the 1995 American League Division Series against the New York Yankees saved baseball in the Emerald City, as a ballot measure for a new stadium to replace the outdated Kingdome had failed before the 1995 season ended and rumors of the team moving ran rampant. But that will be for a later date.

“Sports will make you smarter” moment of the day: RYAN (60D: [“Saving Private ____”] – One of the great moments of hilarity to ever occur on a baseball diamond happened 26 years ago yesterday. On that day, in Arlington, Tex., then 46-year old pitcher Nolan Ryan of the Texas Rangers hit Chicago White Sox third baseman Robin Ventura, 20 years Ryan’s junior, with a pitch in the fourth inning, a moment that made Ventura none too happy after he had singled off Ryan in the first inning. After taking a couple of steps to first base after getting hit in the arm, Ventura charged the mound to get vengeance. Instead, he got put in a headlock and had a few knuckle sandwiches delivered onto the top of his dome by the near-50-year-old Ryan. Here’s the video…and you’re welcome! (Also, Ryan, despite probably throwing the most punches of anyone involved in this brawl, was not ejected from the game! He remained in the game and, eventually, earned the victory for the Rangers.)

Thank you so much for the time, everyone! Have a wonderful rest of your day and, as always, keep solving……………………in bed!! 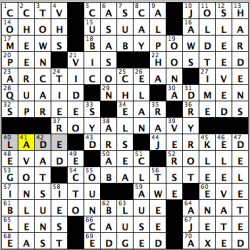 Hello once again! Amy is having fun at the moment at Wrigley Field watching the Cubbies (Chicago Cubs), so, with sports taking our dear leader away for the time being, it is fitting that I’m (Ade) here in her stead. Today’s grid, brought to us by Mr. Jon Olsen, could have been an homage to Miles Davis’ legendary jazz album, Kind of Blue, as much as Bobby Vinton’s tune! Each of the first four theme entries is a two-word answer in which each of the two words can also be used to describe a shade of blue. The fifth theme entry, BLUE ON BLUE, acts as the reveal (61A: [1963 Bobby Vinton hit…or a hint to both halves of 18-, 23-, 37- and 54-Across]).

Along with the execution of the theme entries, which was pretty solid, loved seeing COMPAQS for the fact that a Compaq Presario ended up being my first-ever laptop, bought in the summer between my freshman and sophomore year in college (1D: [Pioneering personal computers]). Those who are not up on their computer companies might have been thrown off at the “QS” at the end, though putting the “Q” in for QUAID ended up making “Compaqs” a giveaway (28A: [Actor Dennis or Randy]). Had a couple of more-than-minor hiccups when solving, with one occurring when I put in the very active “Altimas” where the very not active DATSUNS should have gone (42D: [Old Nissan autos]). The “T” from GOT (Game of Thrones) ended up being the trap setter, along with my momentary brain fart (53A: [TV show set in Westeros, for short]).

For some reason, I could not make out AS A SON (6D: [How one’s much-loved nephew might be treated]) quickly, which then made that intersection with CASCA all the more trickier (5A: [Co-conspirator with Brutus and Cassius]). That, and IEST was some unsightly crosswordese as well (58D: [Superlative ending with grass or glass]). But that fill was definitely made up for, in my opinion, with the appearance of the pioneering Esther ROLLE and one of my all-time favorite TV shows while growing up (52A: [Esther of “Good Times”]). I’m almost certain that, when I watched the show and my dad was recording all of the episodes, that the shows were being recorded on our Beta machine and before we went all fancy and bought our first VHS player, where we then proceeded to record The Simpsons and more pro wrestling (4D: [Bygone kind of tape]).

For those who are sports inclined, and specifically those who are soccer enthusiasts, know that U.S. Men’s National Soccer Team star and Hershey, Penn. native Christian Pulisic will be making his English Premier League debut for the world famous soccer club CHELSEA this weekend (25D: [Posh neighborhood of London or New York]). It is possible that Pulisic will become the first American-born megastar in a top European league. It will be fun to see his journey in Merry Olde England!

“Sports will make you smarter” moment of the day: AJA (64D: [Best-selling Steely Dan album] – Already one of the top players in the Women’s National Basketball Association (WNBA), Las Vegas Aces forward A’ja Wilson has already been named to the WNBA All-Star game in her first two seasons as a professional. Wilson won WNBA Rookie of the Year last season and, while at the University of South Carolina, led the Gamecocks to the program’s first-ever basketball national championship in 2017.  While at Carolina, Wilson was named SEC Player of the Year and a consensus First-Team All America three times, winning the national player of the year in the spring of 2018.

Thank you so much for your time and attention, and I hope you CHEER UP soon if you ended up not being a fan of my pinch-hitting role tonight (2D: [“Come on, things aren’t so bad”]). Have a great rest of your Tuesday! 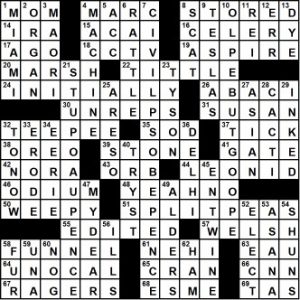 THEME:
See if you can figure it out from the title and the reveal and the theme answers:

Clever. Creative. Way too hard for the Arkansas non-NYT-solvers’ union. Who seem to have ceased airing their complaints, FWIW. I did not get the theme until I was writing this. This felt like a Times Thursday.

Other stuff that caught my attention: 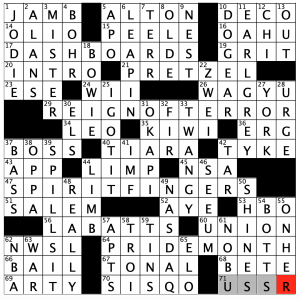 I have mentioned a few times here that my timer on Across Lite doesn’t automatically start on these Jonesin’ puzzles, and I often forget to start it. I had a similar problem with one of the recent Inkubator puzzles as well. (I think it was the contest puzzle.) You computer savvy solvers must tell me, or the producers of these files, how to fix it! (Or maybe it is just me who has the issue!) Let’s learn about women’s pro soccer today:

Yes, the NWSL is the National Women’s Soccer League, and the teams cited are: The Houston Dash, Reign FC (they play in Tacoma, WA), the Washington Spirit, and the Orlando Pride. The league is only 9 teams, but I am sure it will keep growing. Many of the stars from the US Women’s World Cup champions play in this league. I still have never seen an MLS game, so now I have two more leagues on my list to go see! Nice puzzle, even if you’re not a soccer fan. 4.4 stars.

I still need a nap … I am getting old! 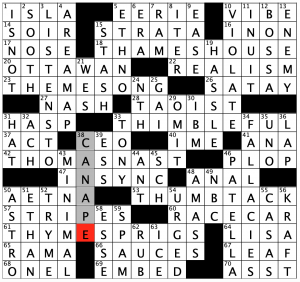 I have done several Craig Stowe puzzles at this point, so the time on this one was rather quick. This theme is a fairly common vowel-sequence theme, but done slightly differently:

Not only is does this puzzle treat the sequence with a unique set of letters (TH?M), but it also includes the Y as a vowel, and I don’t think I have seen that done before in this style. Maybe once, but there are evidently databases that you can check for this kind of thing. I thought this was great 4.7 stars from me, on a puzzle that DEFINITELY didn’t “Tuez!”

That is all for now! Have a great week!

It’s not often we get a WSJ puzzle from a woman who isn’t Zhouqin Burnikel, so I want to highlight that fact.

But Debbie’s no newbie to construction, she brings us a beautifully clean grid with a nice theme and strong fill. And a title that’s spot on. 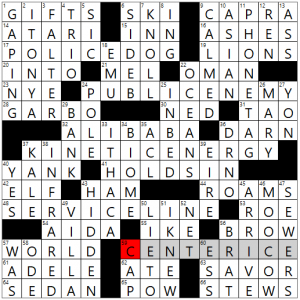 Typically, it’s more desirable to have hidden words (like ICE) spanning two or more words in the entry, as is the case with two of the entries here. But with the added constraint that the hidden word be in the exact center of the entry, I suspect the constructor and editor felt a little more leeway was allowed. I’m inclined to agree and don’t mind the first and last theme entries.

I’m always impressed when I see a smooth grid with a central entry that’s of an unusual length (i.e. not 3-, 5-, 7-, or 15-letters long). The grid felt so smooth I hardly noticed that central entry was 13-letters long.

Fave bits of fill include PHONE TAG, INFRARED, ALI BABA, and MOO COW. And aside from old standbys DR NO, EIRE, and ESS, there’s almost nothing to scowl about.