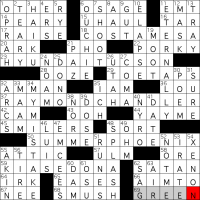 hello and welcome to episode #583 of matt gaffney’s weekly crossword contest, “Fifty Sense”. i did this week 1 puzzle without the instructions, but it rapidly became quite clear what we were looking for anyway. what are the theme answers?

so as the COSTA MESA clue makes clear, and the clue {State that is not the meta answer but fit nicely into the grid so whatever} for UTAH in the fill reinforces, we’re looking for a u.s. state. chandler is probably the most obscure of these, but MESA, TUCSON, SEDONA, and most obviously PHOENIX are all cities in arizona, which is obviously the answer.

if there were ever a week 0 meta, this would be it. arizona’s a reasonable choice, though. there aren’t that many states with 4 or 5 cities that can be turned into theme answers like this. COSTA MESA is a little clunky, in that it’s also just a city name, and frankly not an especially familiar one, but that’s about the only blemish here. you can’t really get FLAGSTAFF or TEMPE or YUMA to work, and those are about the only arizona cities as famous as some of the ones in the theme already. (glendale, i guess, but there’s an equally large glendale in california, which would confuse the matter somewhat.)

in the fill, i enjoyed {“I did it!”} YAY ME and its counterpart {“Sorry about that”} MY MISTAKE, didn’t love {Happy people} SMILERS, and wondered if {“___ bin müde” (German for “I’m tired”)} ICH was matt the dad of a toddler projecting onto matt the crossword constructor. i had one of those moments (i think somebody once gave this a name but i’ve forgotten who or what) where i tried IRKED for {More than annoyed}, which turned out to be IRATE, but then IRK itself popped up later, clued as just {Annoy}. i suppose that’s accurate enough, and if i had taken the time to weigh the merits of the two possibilities, i could have come to the conclusion that “more than” suggested that IRKED wasn’t strong enough. but it was quicker just to check the crossings.

that’s all for me. have a great tuesday!