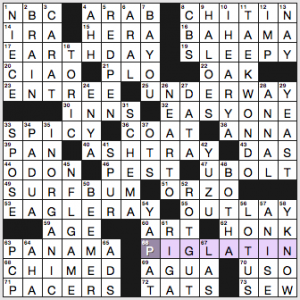 The theme of the day is 66a. [“Language” that explains the answers to the six starred clues], PIG LATIN. Find a word that answers the theme clues, convert them to Pig (feral hog!) Latin and Bob’s your uncle.

Fair enough. Not the first Pig Latin theme we’ve encountered over the years, of course.

What are we dealing with today in today’s “Deal With It” puzzle? 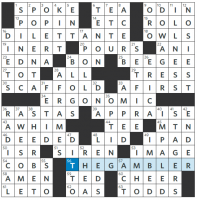 I liked this theme! I’ll admit I wasn’t familiar with the song (don’t judge me), but I appreciated that the poker-related words were hidden in the second halves of words rather than used as the second words in two-word phrases like we usually see. I also liked that the poker-related terms used in the theme were probably the most common and relevant words to the game. Deal me in!

Other random thoughts:
– There were more women in this grid than we normally see – ANI DiFranco, Tracy and EDNA from “Hairspray,” Eartha KITT, Violet Crawley, Artemis, ERICA from “The Goldebergs” – but there were almost as many men mentioned in just two clues combined – [Barry, Robin, or Maurice] BEEGEE and [“Don Carlos,” “Don Giovanni” or “Don Pasquale”]. There were plenty more men than that throughout the grid, so it still feels unbalanced as a whole. Fill like RHEA or SIREN could have easily been clued with respect to women as well.
– I liked the clues for TEA [It’s served in spots].
– I wasn’t a fan of A FIRST. I know partial phrases are relatively common, but I feel like adding a/an to a word and including that as part of the fill is a stretch (especially when A WHIM is also in the grid). 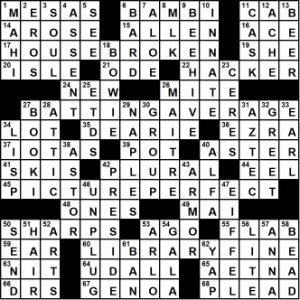 THEME:
See if you can figure it out from the title (Tarzan fans who watched old movies and TV should have no trouble):

Other stuff I took note of:

P.S.–FWIW: At a meeting a couple hours ago (this is being written on Aug. 6 at 10 p.m.), a sophisticated crossword solver (a woman in her late 70’s who was just learning to work NYT puzzles in the aftermath of a stroke 12 years ago when she took a crossword course I was teaching) asked me what I thought of “the new New York Times puzzle” in the local paper. She was referring to the Universal Crossword. She mentioned that many of her friends had stopped working it, because it simply “ran off and left them,” a reference to the perceived level of difficulty. She, on the other hand, would have nothing to do with the Universal when the previous editor was in charge, but is now working it regularly. 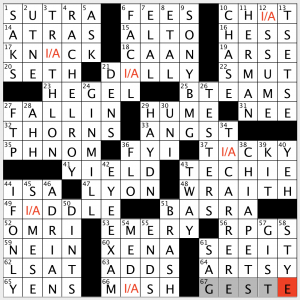 This week’s AVCX is from editor Ben Tausig, and I think the 5/5 difficulty rating was right on the money – this took me about twice as long as the AVCX normally does, but I really liked the theme once I caught what was going on:

All of these are terms that are in a sort of throw-away kind of way to suggest triviality, reduced to fit in one set of grid squares where the I and A share one square- CHIT-CHAT, KNICK-KNACK, DILLY-DALLY, TICKY-TACKY, FIDDLE-FADDLE, and MISH-MASH.  The down fill uses both the I and A in that order – TRIATHLON, FACIAL, I ASSUME, TIA CARRERE, SIAMESE, and MEDIA.  Solving this felt like a themeless where I could tell something was going on under the surface, and I liked the “AHA” it required midway through to figure out what was going on with the downs affected by the theme.

Some things I learned while filling in this grid: I can’t spell PNHOM Penh correctly to save me life (I keep wanting to swap the N and H), LYON is known for its coq au vin, HAYDN was a contemporary of Mozart, and CHIA PETS were made of terra cotta (I tried PLANTERS there first, which feels technically correct, but I thought said faddish planters were made of some material that merely aped terra cotta)

RACHEL ROY (4D, “Designer once, er, linked to Jay-Z”) is rumored to be the “Becky with the good hair” referenced by Beyonce in “Sorry” 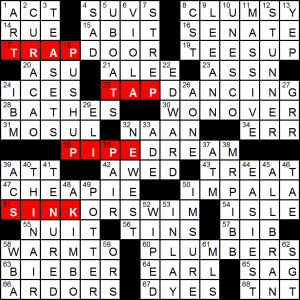 Simple enough theme today, PLUMBERS, and what they work on : a TRAP, a TAP, a PIPE or a SINK. Cleanly executed, despite the subject matter. Our PLUMBERS have been fighting a war against the roots, but because the offending pipes aren’t directly on our property everything has become political.

I don’t think I’ve seen ALLBRAN in a puzzle, which seems surprising from my angle, as it’s a heavily marketed brand here. Nice to have some roughage in your breakfast entertainment.