This looks to be a debut for our constructor, so kudos to Steve!

He brings us a revealer-less grid that, at first glance, seems to contain an anagram theme. But taking the title into account, we come to realize that the final E of each base phrase was moved inward two spots to create the new wackified phrases. 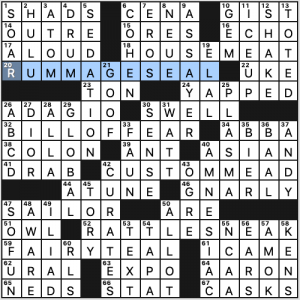 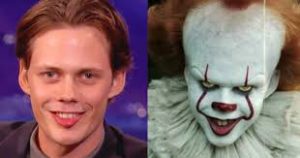 Bill Skarsgård as Pennywise in “It”

Solid wordplay and I like the consistency employed when moving the Es inward.

My solve proceeded smoothly except for that northwest corner which seemed to have a heavy concentration of ambiguous clues with a little bit of un-signaled French and trivia thrown in. Eventually, it was sussing out the theme (and guessing SEDATION correctly) that gave me the inroads I needed to complete the grid.

With 60 squares of theme material, you might expect a troubled grid, especially in those areas where theme entries are stacked. Yes, there’s NEUE and A TUNE, but beyond that, everything else feels legit. The longer fill seems workmanlike, owing to the amount of theme material, but I liked GNARLY, and AMNESIAC is fun given its clue [Staple character in soap operas]. 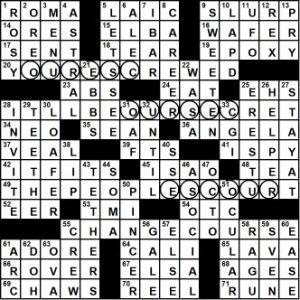 THEME:
A diversion is a change of course, no? Yes:

Other stuff that caught my eye: 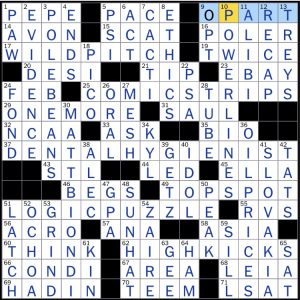 The cluing on today’s NYT was not on my wavelength, so this grid’s theme took me waaaaay too long to crack:

As soon as I realized the revealer was THINK TWICE, all the half-filled theme clues I had in the grid immediately fell into place – it’s not “Tar remover”, it’s “Tartar remover”!  That’s a DENTAL HYGIENIST.  Similarly, a boo-boo during a baseball game is a WILD PITCH, Tintin has been in COMIC STRIPS since 1929, Kenken is a LOGIC PUZZLE, and a can-can consists of HIGH KICKS.

I struggled with the top part of this grid – I couldn’t remember that PEPE is a nickname for José, couldn’t grok PACE as an answer for “going rate” (I kept wanting EACH or FARE), and despite my love of OP ART I couldn’t make the connection needed for “Motion pictures?” to work for me as a clue.  Elsewhere in the grid, I liked the cluing of AVON as “Company with a for-profit foundation?” and the pair of “Law school class” clues for EVIDENCE and ETHICS, which made me think of this fascinating article I read earlier in the week on Elizabeth Warren’s career as a law professor.

This year’s Eurovision Song Contest is now on Netflix, but you won’t spot SLOVAKIA there – they haven’t participated since 2012 (above), when they placed failed to qualify to the final for the fourth consecutive year. 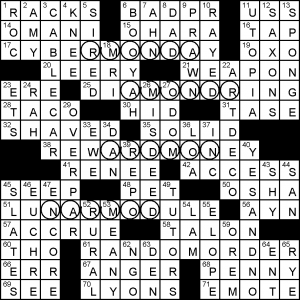 The puzzle’s theme was revealed a lot more obliquely than usual. It is a hidden word theme, but unlike many, the hidden word isn’t circled. The revealing clue for RANDOMORDER, [Ideal deck-shuffling goal … and a hint to a hidden word, and how it appears, in the four other longest answers], is also quite cryptic. It turns out that it is simply the word RANDOM that is scrambled across the four two part answers. The best part of this theme is, despite quite a long hidden string, the answers don’t feel overly forced. In fact, CYBERMONDAY is an answer that would look good in any themeless puzzle. I feel like good theme answer choices is sometimes overlooked relatively in themed puzzles. If it fits it sits is for the cats!

I feel like I’ve bagged on the fill of some of Mr. Huget’s puzzles before. This one, despite a busy theme, had some fun bonuses: CABLECAR (which I read as San Francisco airport first???), OVERPAR, ARTDECO, BOOYAH. Nothing crazy, but still a nice collection of fill nuggets.