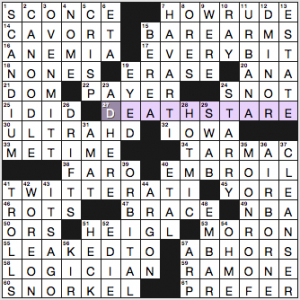 Gonna start right off calling bullshit on 16a. [Feebleness], ANEMIA. Sure, my hemoglobin level runs low, but if you call me “feeble,” I’m coming for you. You can trot out all the thesauruses you want, holler that this is about feeble excuses rather than feeble people, but it’s not going to make me like this clue one bit.

Fave fill: I always like CAVORT. “HOW RUDE!” is good. BARE ARMS are a thing, as is EVERY BIT. The NONES, as in people whose religious affiliation is “none,” that’s a term that I’ve been seeing off and on over the last decade or so. I like a good DEATH STARE—my mother-in-law has a great one that’s combined with side-eye. TWITTERATI, SNORKEL, CANOODLE, OVEN MITT, a HOT MIC, MOON ROOF—also on my likes list. 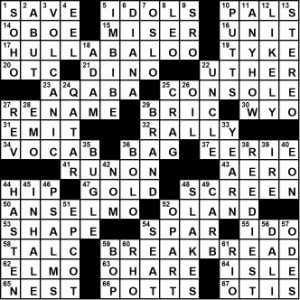 THEME:
Let’s go straight to the starred clues and figure it out as we go:

Other stuff that grabbed my attention:

This is a delightful, breezy puzzle from Aimee to welcome the weekend. My on-call week ended just before I solved it. I’m sitting on the screened porch in lovely not-very-humid air. Ahhh. Friday morning.

The core of the puzzle is the staggered stack of 10-letter answers in the middle: DROP THE BEAT, SPACE PIRATE, and BEASTLINESS. They’re all fresh and were fun to solve.

I moved fairly smoothly through the puzzle. It’s easy without being dumbed-down, a difficult feat that Aimee performs well every time. 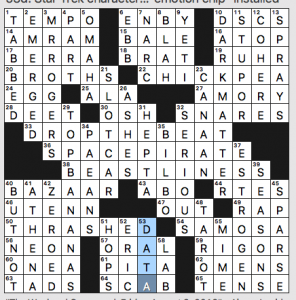 What I didn’t know before I did this puzzle: I’d never heard of Megan AMRAM. I didn’t know that ENBY was a texting term for [Gender fluidity]. That’s ENBY as in NB as in non-binary.

This was a really fun puzzle! It’s on a par with the best NYT Thursdays and it’s one of the harder LAT Fridays I’ve done. What a great way to start the morning! Alicia’s not in our database, which makes me think this is her debut. I look forward to more from her.

I knew something was weird when I had KR to start 5d. I left it alone and kept working through the puzzle, only to find that I had HC to start 10d. Also weird. I took out the C and then filled in the rest of that corner, and the penny dropped. All the theme answers are Downs that actually read Up. 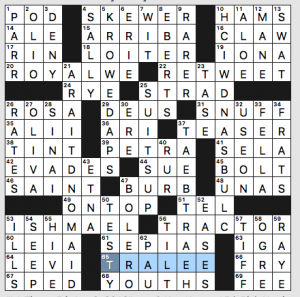 There’s a revealer at 25d: [Gets ready for the big game … and a hint to four puzzle answers], and at first I thought it also read up, but it doesn’t. It’s SUITS UP. All the up-going themers start with the names of card suits. Such a fun theme!

What I didn’t know before I did this puzzle: that TRALEE is the seat of County Kerry.