So it sounds like we’re looking for a horror film director from the past. Which one? The answer lies in the *’d clues. 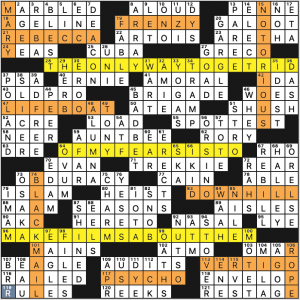 I’m not a huge fan of quote themes, but I’m not as opposed to them as others. If it’s done right, I think it can be quite good. This one is quite good. Yes, the quote breaks up a little awkwardly, but it’s symmetrical and very apropos to the man behind the quote, and the title of the puzzle is just so perfect. Plus, the addition of one-word film titles, clued as regular words, is a very nice touch.

I’m really impressed with the grid construction here. Our constructors found a perfect quote which breaks nicely enough in a symmetrical fashion. Then they found  ten one-word film titles that are also arranged symmetrically, with four of them crossing. And not only that, two others cross the quote. Well done!

I’m not exactly sure how many one-word titles Hitchcock made (I know of Marnie, Topaz, and Suspicion, off the top of my head). I’m sure there are others, as many films as the man made. So it sounds like our constructors had enough to give them some leeway. Still, some of these films are lesser known. I didn’t recognize DOWNHILL (1927), BLACKMAIL (1929), MARY (1931), or LIFEBOAT (1944). But that didn’t stop my enjoyment of the theme.

There isn’t much in the sparkly fill department with all that theme material everywhere, but there’s enough CHARM in the mid-range stuff: BRIGADE, OLD PRO, AUNT BEE, BAD BET, TREKKIE, BEAGLE, GALOOT, etc. WAAH [Cry from a crib] feels a little random, but I was able to get it just on the W. And we do get a vocabulary test in OBDURACY (73a [Bullheaded refusal to change]), but the crossings are all fair enough.

Fave clue goes to [Bread machine?] for ATM. I suspect that’s not new, but I don’t recall seeing it, and it’s just so good.

Good puzzle! As nice a tribute/quote grid as you’ll find, I think. 4.1 stars.

Woo-ooo! If you’ve ever seen the British kids show Horrible Histories (now on American Netflix), you might have seen the sketch “You’ve Been Artois’d!”, a parody of hidden camera/prank shows like Punk’d. It cracked our family up so much that “You’ve Been Artois’d!” became a catchphrase for us. Ergo, I couldn’t let ARTOIS (22a, [Stella ___ (Belgian brew)]) go by without sharing the fun. Woo-ooo! 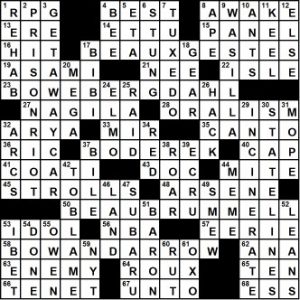 THEME:
Five different spellings for the same sound, BO. Hmm. At a certain point, I was staring at all the answers I knew and I had three blank boxes: For 3d, I had
?ETAW??CAR. I had no clue regarding what turned out to be RPG, NAGILA and ARYA.

Yeah, I slapped myself upside the head when GETAWAY finally came to me, but its clue, as clever as it is, is weekend tough. Just saying, asking, really, if anyone else had issues with the three words I did not know. I’ve not watched “Game of Thrones.” I’ve never played “Dungeons & Dragons.” And my knowledge of Israeli folk music is zilch.

That said, I enjoyed this crossword; it just didn’t feel like a Universal. Though, this type of stuff is more and more seeming to be what Universal is going to be. And, ultimately, I will be fine with that.

Other stuff that grabbed my attention:

I had fun with this one, but spent way too much time with it. 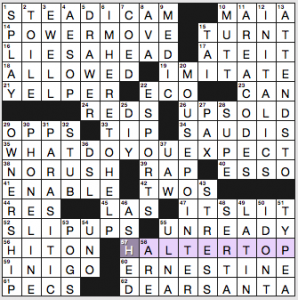 Daaaang! This one took me longer than any other Saturday NYT in the last year. Anyone else get their butt kicked by this puzzle? Nothing unfair or mystifying, just not coming together for me without a struggle.

Fave fill: cinematic STEADICAM, a POWER MOVE, YELPER, UPSOLD, “WHAT DO YOU EXPECT?”, “NO RUSH,” HALTER TOP, “DEAR SANTA,” PARASITIC (just watched Monsters Inside Me last night—there was a Peace Corps volunteer who ended up with Entamoeba histolytica, and a traveler with a botfly problem), “I’M HERE TO HELP” (which just might be Erik’s personal motto—he’s such a mensch), ESPORTS (yes, it’s a real thing now—playing video games for money), and IN ITALICS.

Did not know: 29a. [Enemies, in slang], OPPS. Short for opponents? Opposites? I’m guessing the former. Did know the slangy TURNT (are people still using this one?) and “IT’S LIT,” however. 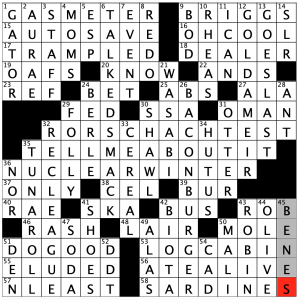 I have not solved too many of Evan’s puzzles, but this one went fairly easily. The stacked 13s in the middle make for a great wide open grid, but they aren’t too difficult. I got NUCLEAR WINTER at 36A quickly, and that helped to make the puzzle fall that much faster. A true joy to solve. 4.5 stars. 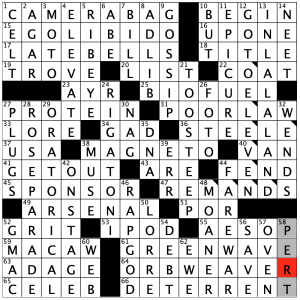 I had a great start on this puzzle, but the E/SE section just buried me. I had most of this puzzle done in about 8 minutes, but it took nearly a full 10 MORE minutes to finish! Brad and Matthew have made another great puzzle, and although I would call this slightly easier than the toughest Stumpers, I was still fully STUMPED, especially in that lower right corner! 4.6 stars.

Whew! Time for a nap. Have a great weekend!