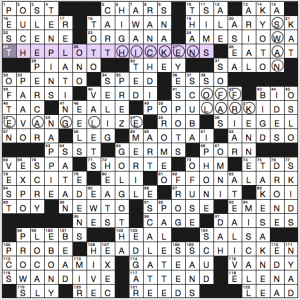 Bird-related wordplay yields the puzzle title, “Bird Play.” The circled letters within some themers suggest a familiar(ish) phrase that appears as another themer:

It’s a little weird that two theme pairs are symmetrically paired in the grid, while the pairs in the middle have swapped partners. The HEADLESS CHICKEN and OFF bits kinda wrecked the theme for me. 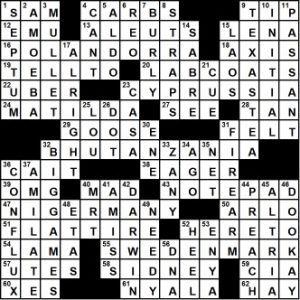 THEME:
Guessable from the title, the theme is overlapping spellings of countries:

Nicely done, Alex! I was most entertained.

I flew through this grid in, what seems to me, a record time for a 21x. It’s smooth, clean, with a nice theme and great fill. A beautiful job!

The theme is revealed at 67a CAPITAL CITY [Center of a nation’s political power … or of each starred entry]. Each theme answer is hiding one of the world’s capitals. 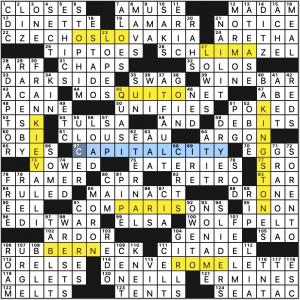 Oh, hang on! I just realized that the cities are all at the exact center of each entry! Wow. This makes my nit about MOSQUITO NET and COMPARISONS go away. I’m quite impressed.

And there’s nary a thing to scoff at—certainly nothing we’ve never seen before.

Fun theme! All the theme answers are “adjusted” to include poetic references. Wackiness results. 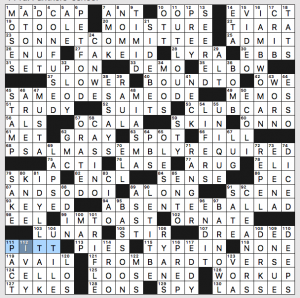 All the base phrases are solid, and all the poetic transformations are funny. That’s a win.

John sent us this relevant picture of a carpenter ANT eating a caddisfly. He comments “Since the wings are hairy, the ant will spit them out. I mean, would YOU eat them?” No. No, I would not. 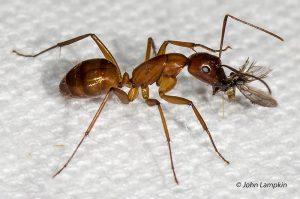 This week Evan gives us a themeless puzzle, just the thing for an aimless Sunday. I found this more challenging than most of his puzzles; this is not a complaint.

I love conversational clues like 3d, [“Wanna try and do better than me?”]. The answer is CAN YOU TOP THIS?

I also loved the two longest Across answers. 47a is a great clue: [Organization that often requires cuts?] for FLOWER ARRANGEMENT. 77a is more straightforward: [Lambda Legal cause] is TRANSGENDER RIGHTS (among other things). I’m delighted to see that in a mainstream crossword. 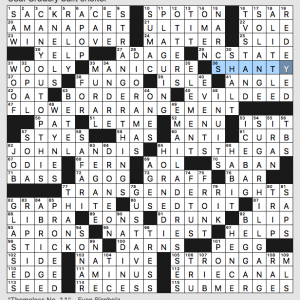 What I didn’t know before I did this puzzle: that there is a video game called ULTIMA with a hero called the Avatar; that John Landis directed “Coming to America;” that the TSARs were advised by boyars; and that there was a show called “Garfield and Friends” that featured a song named “Truckin’ ODIE.” Whoever owns the rights does a danged good job of protecting them, and so you are spared a video of this magnum opus.