The simple addition of DE- to the start of various base phrases creates crossword wackiness. 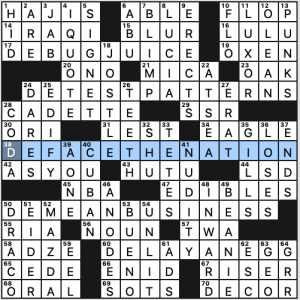 Works well enough. Each altered word in the base phrases has its meaning sufficiently altered as well. Solid and consistent. 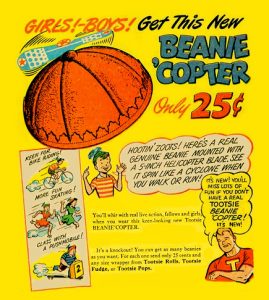 However I had the feeling there was a heavy reliance on crosswordese throughout the grid. Case in point: SSR crossing ERAT with AT SEA thrown in for good measure. Also, the NE and SW corners each have only one way in and out and cross only three theme squares. With that low level of constraint I would think entries like OLEAN, EIDER, RIA, and ADZE could all be avoided in favor of fresher fill. Plus elsewhere in the grid there’s SHU, ENID, ONO, MICA, A-ONE, partials OR I and AS YOU, and plural French TETES.

I did like NUDITY, JOSTLE, SIGNET, EDIBLES, CADETTE, and BEANIE (the propeller kind). I want to like “I QUOTE” [“The exact words were…”], but it feels like it’s missing the leading “And”.

And then there’s HAJIS at 1a [Returnees from Mecca]. Every source I looked at included a version of this definition. That’s fine. But there’s also the derogatory definition, and once again, once you enter the word into the grid and separate it from its clue, you run the risk of unintentionally causing offense. So why go there if you don’t have to? Since it’s not crucial to the structure of the grid, I’d replace it with something else. REGIS works.

In the end, I feel this grid has a decent theme, but it would greatly benefit from some cleaning up. Three stars from me.

Edited to add: The theme brings to mind this classic Monty Python song: 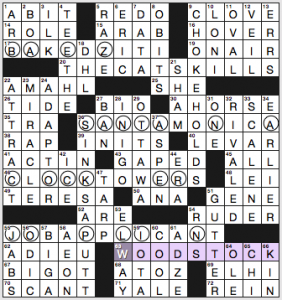 Toni Morrison died last week and David Kahn writes a lot of posthumous tribute puzzles, so I figured that’s what we had here. When 5d RAZE gave me a Z in the 4th circled square of 17a, I promptly filled in J-A-Z for the three prior circled squares, Jazz being a Morrison novel I liked. Alas, 17a. [Casserole dish in a trattoria] wasn’t going to work with JA*Z*Z***, and BAKED ZITI put Joan BAEZ’s name into play. SANTANA, Joe COCKER (does anyone ever just call him Cocker?), and Janis JOPLIN fill the other circled squares, and they all played at WOODSTOCK, which, apparently, took place in THE CATSKILLS 50 years ago. Raise your hand if you never had the foggiest idea that Max Yasgur’s farm was anywhere near the Catskills.

This 15×16 grid’s unrelated (except for the hidden names) themers are solid. Not mentioned above are SANTA MONICA, CLOCK TOWERS, and a JOB APPLICANT. 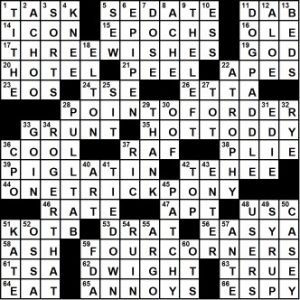 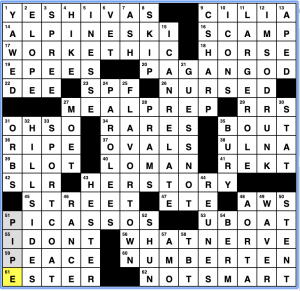 It’s a themeless week at the AVCX, with Paolo Pasco taking the reins.  This was given 4/5, but I would have given it 4.5 for difficulty – there was some tricky cluing going on here:

The cluing for WHAT NERVE (“[gasps, slaps you with a glove]”) made me think of this ditty from the Simpsons riffing on “Love Shack” 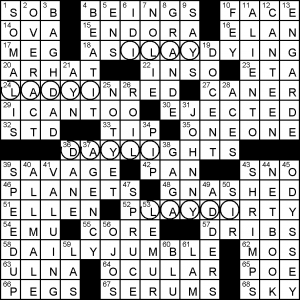 Enjoyed the design choice of all four corners being 3×7 – phat stacks!