The last time Blake Slonecker was here, he gave us a really nice grid. Let’s see what he has in store today.

Well, whaddya know. It’s yet another WOODSTOCK-themed (62a, [Aquarian event at Yasgur’s farm, and a hint to what’s formed by the circled letters]) puzzle. In Tuesday’s version, we had to find first names of  performers. In yesterday’s NYT outing, we had to find last names of performers. What’s it going to be today? Middle names?

Hardly. It turns out the circled letters have nothing to do with the performers. Instead they are all trees, or “providers of wood stock”, as it were. 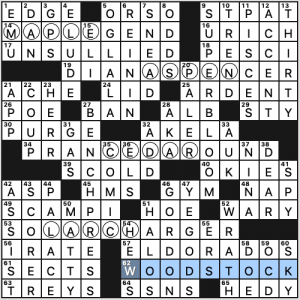 Solid enough theme. I like that each tree is no less than five letters long; none of this three-letter ASH or ELM nonsense! Well done. 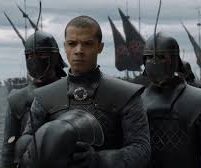 The UNSULLIED from “Game of Thrones”

Beyond the theme we find some lovely fill. I like EL DORADOS (despite being plural) and UNSULLIED [Pristine]. But come on! We know who the UNSULLIED are! Those guys over there!

I also love the timeliness of SUPERBLOOM [2019 phenomenon in California’s Anza-Borrego Desert State Park] which occurred near my sister’s house in San Diego, as well as the lively BENCH PRESS [Lift while lying], SCAMPI, and “YE GODS!”

I had trouble with ELI [Broad with billions] (I’m glad that clue turned out to be a proper name), OGLALA[Pine Ridge people], and HEDY [Delilah to Victor’s Samson]. I couldn’t figure out what that last clue was asking for. Finally, after getting all the crossings, I realized it’s HEDY Lamarr who starred with Victor Mature in the title roles. I did not have trouble with URICH [“Vega$” star], because I remember this show, and his name pops up in crosswords every now and again. But I’m sure some of you young pups might (justifiably) complain.

One other clue of note: 38d [How to sell, idiomatically]. DEAR. I don’t think I know this idiom. Anyone care to clue us (me) in?

Solid grid though not quite as remarkable as Blake’s last offering. 3.5 stars. 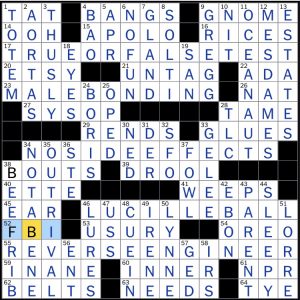 In hindsight, it took me too long to figure out what was going on with the theme of this Thursday’s NYT from Andrew Zhou:

I like what’s going on here – each phrase has the name of an engineer/inventor running in reverse through it — Nikola TESLA in TRUE OR FALSE TEST, Alfred NOBEL in MALE BONDING, Thomas EDISON in NO SIDE EFFECTS, and Alexander Graham BELL in LUCILLE BALL.  I’m a little disappointed by the all-white dude slate of inventor choices here – I realize there are constraints on what works when it’s placed in reverse, but I would have loved to have seen Marie CURIE, Grace HOPPER, or George Washington CARVER representing a little more diversity in the grid.

Let’s do a quick tour through other interesting fill in the grid: we’ve got the Travelocity GNOME, APOLO Anton Ohno, ETSY, the novelETTE (which is longer than a short story, but shorter than a novella), OCEANAUT, MESDAMES, OUTRIVAL, and BEEF RIB.

That’s it for Thursday! 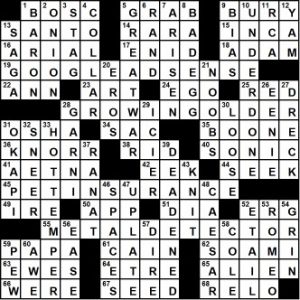 Now let’s look at the themers and try to detect the metal:

Some good stuff elsewhere, too:

Good short fill, also, though I have one complaint, and it’s probably against myself, not the constructor or the editor. I did not know KNORR or GARNI. So, I flew through this puzzle in just over five minutes, only to have one box open and feel clueless. So, I literally went letter-by-letter to complete the final box. Both answers  have been in enough puzzles that I should know them. 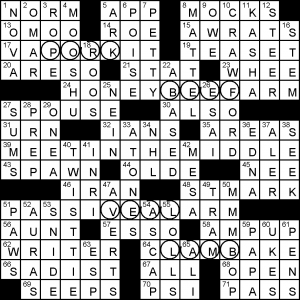 Today’s theme is kind of similar to yesterday’s. Words are hidden in the middle of long across phrases. They aren’t scrambled this time, and the words vary each time, making a Norman set: PORK, BEEF, VEAL, LAMB. The revealer is MEETINTHEMIDDLE (MEAT). Of the themers, I personally have never heard of a VAPORKIT, but then the fad was never aimed at me.

My favourite clue was the opening one: [“Cheers” cheer], NORM, which first had me scrambling for some kind of toast. On the other hand [“Mommie Dearest” mommie], CRAWFORD was a mystery. Looking it up, I kind of recognize it, with the clue referring to actress Joan Crawford, the subject of the biopic. 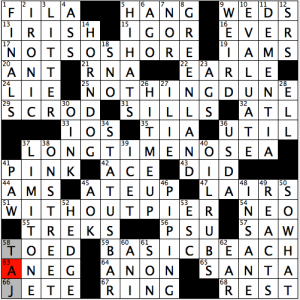 With HORNDOG, HIT ME UP, and OIL RUBS, this puzzle has a distinctively randy vibe. 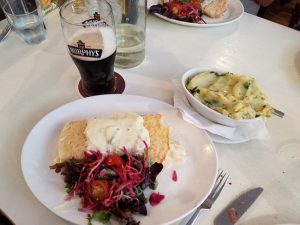 An IRISH meal of chicken boxty and colcannon with Guinness

In case you didn’t know: The world’s largest national park is in GREENLAND.

That’s all. Until next time!