Niamh Girling and Mira Martin-Gray’s Inkubator crossword, “Get With the Program”—Jenni’s write-up

I enjoyed this puzzle a lot. The Inkubator team tells us that Niamh and Mira “love crosswords and each other.” I look forward to seeing more from them – this one was great!

Each theme answer is a portmanteau including the name of a popular app – and not the kind you eat. 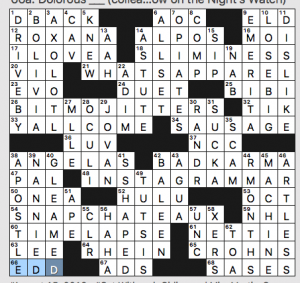 Inkubator, August 16, 2019, Niamh Girling and Mira Martin-Gray, “Get With the Program,” solution grid

They’re all amusing, they all make sense within the parameters of the theme, and they were fun to solve.

What I didn’t know before I did this puzzle: I’m ashamed to admit I’d never heard of NETTIE Stevens, who discovered the X and Y chromosomes. I have also never heard of Dolorous EDD. 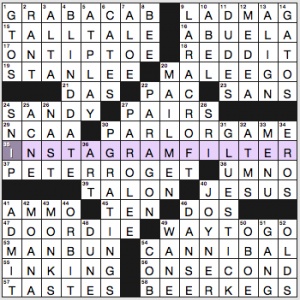 What, did someone bet the constructor that he couldn’t include a critical mass of dudebro fill in a single puzzle? Because this puzzle is has testosterone seeping from its orifices. LAD MAG, STAN LEE, MALE EGO, PETER ROGET, JESUS and ABEL, MAN-BUN, BEER KEGS that were probably ordered by dudes, DUDES, MAILMEN duping the MAN of MAN-BUN, Thomas NAST, honorific SRI not used for women, MONKS, OLDS, and even a male swan, or COB. And in the clues, we find Pecos Bill, Freud, Cocteau, Kevin Bacon, Ford, Packard, Disney, and not-real-people Fido, Santa Claus, and Babe the Blue Ox.

I haven’t seen the new issue of Wired magazine and the article’s not posted online yet, but there’s an article that I think focuses on Rebecca Falcon’s critiques of representation and the lack thereof in crossword puzzles. This puzzle has a handful of women (mostly fictional) in it, but nowhere near the onslaught of male terms and names. I wasn’t even giving dudely credit for AMMO and GTOS, and the scales were still tipped all the way over.

2.5 stars from me because of dudebro fatigue. There needs to be a balance between “fresh fill” and “fill that basically tells women to keep out.” 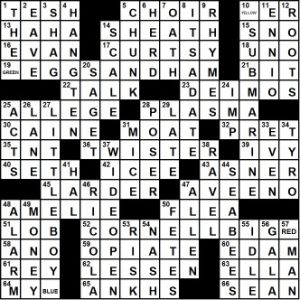 THEME: Here we have a rebus with colors in each of four squares. And, as I begin to write this, I cannot yet suss out how this relates to the title. So, let’s do some exploring, starting with the reveal:

Well, one either gets it or one doesn’t. And I don’t, so I look forward to y’all explaining it to me.

Other stuff I took note of includes:

I’m withholding a star count until I understand the puzzle. It’s been a long week! did I say that already?

Now that the theme has been explained to me, I am awarding 4.2 stars. Great puzzle! 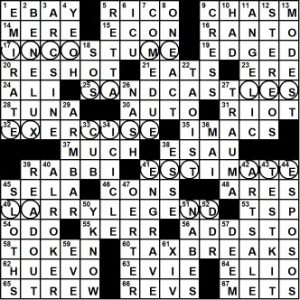 THEME:
Five kinds of taxes, as indicated by circled letters in the theme answers:

Okay. Works for me, though I gotta wonder why this puzzle didn’t run in April, the stereotypical tax month, rather than August, well into millions of taxpayers’ extension periods. At 9-11-8-8-11-9, this theme would not be expected to allow the grid to yield much else in the way of crunchy fill. But, Y’KNOW, for this puzzle, I DEEM that an incorrect assumption.

And the AL ROKER ART SALE TEST KIT ADDS TO EMIRATE, BENELUX, ARCSINE. YEOH, RETTA, ESPOSOS, and OERTER. That last answer/name makes me think of folks in my childhood who said, “Ye oerter know betttern to do that!”

Each theme answer is a piece of apparel clued in an overly literal manner. 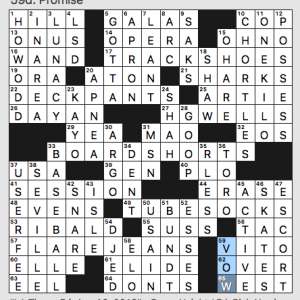 What I didn’t know before I did this puzzle: that H G WELLS‘ initials stand for Herbert George.