Bzzt! Wrong on both counts. We get our answer via a pair of revealers at 9d and 114d: 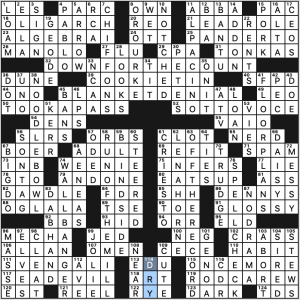 Mostly good, yeah? A few nits, sure, but I definitely like to see something creatively different, and this fits the bill.

Plus, there’s theme-adjacent LENA HORNE at 62d [“Stormy Weather” singer]. Every time I see this song mentioned, I go right back to my military training in the summer of 1989. “Why?” you ask. Through some quirk of the universe, I was roomed with two other guys, and each of us knew most of the lyrics to this song, a song which came out 56 years earlier. We, as teens of the ’80s, had no business knowing that song let alone the words, but we did, and it was something we could bond over and belt out together when we had a particularly rough day of training. Ah. Good times. Good times.

Anyhoo, what else is good in the grid? OLIGARCH, LEAD ROLE, COOKIE TIN, SOTTO VOCE, SVENGALI, ONCE MORE, SEA DEVIL, ROD CAREW, the CHIFFONS, Beto O’ROURKE, AL PACINO, BLIND SIDE, and NO DRAMA (Obama). That’s a lot of sparkly fill!

I had trouble in the SW centered around DAB HAND [Expert, in England]. I don’t think this is a phrase I’d heard of, and I can imagine it causing grief with the likes of crossers OGLALA [Crazy Horse, e.g.] and MECHA [Anime genre featuring giant robots]. 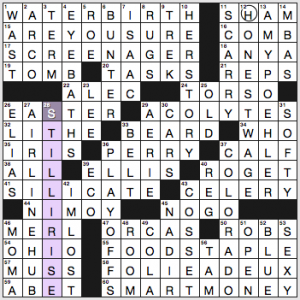 I took a few wrong turns that slowed me down overall, and also struggled with an unknown-to-me term in the opening corner: 17a. [Modern young person vis-à-vis video games and smartphones], SCREENAGER. I don’t know who uses this awkward portmanteau. Anyone know? 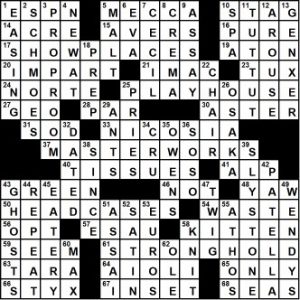 THEME:
“Watch Words” is the title. Could mean anything, right? Well, here, it seems, Paul is playing with something that is near and dear to my heart:  pairs of words that come together, in this beautiful language of ours, and lead to in-the-language phrases or compound or hyphenated words. Ergo, three blanks per clue:

Nicely done. And, in addition, see 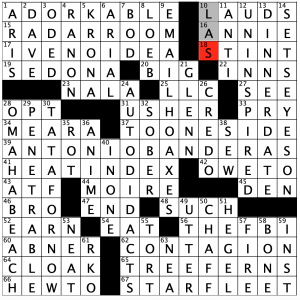 Another crossword from the acrostic pro! Got through this in under 5 minutes, but that doesn’t mean it was that easy. Some of these entries certainly brought a smile to my face, especially 1-Across (see below!). I think I am in a mood to go solve the Double Cross by Michael Ashley in the new October Games World of Puzzles! (I get mine through a zinio.com subscription, so they come super early!) 4.4 stars for this crossword by the talented Mr. Ashley! 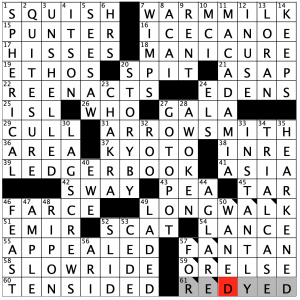 This one was hard. Not quite Longo hard, but it was difficult. I had all sorts of issues in the SE corner, as you can see by the error marks in the grid image. But that’s OK! It was still quite a fun puzzle, and most everything in here seemed fair in the end. It is a Stumper, so what else do we expect?? Another solid puzzle, Greg: keep ’em coming! 4.5 stars.