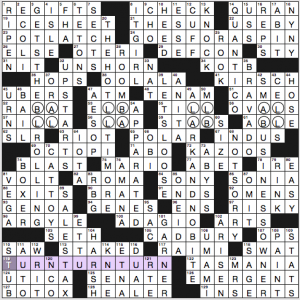 The “Revolutionary” theme includes two 12-letter entries, a row of four rotating BALLs in circled squares, and four long entries that include the 4 letters of BALL in one of those rotated orders:

The other three entries intersecting each of the spinning BALLs are entirely smooth, with just one abbrev. Now, it surprised me that the BALLs are in a row in the top half of the grid, rather than symmetrically slotted with two above, two below—but it’s easier to see the rotational progression with them all lined up this, so I think it works.

The overall fill is smooth, too. Could always do without ESSE and a Latin state motto FITB clue, but having REGIFTS at 1-Across was a lovely start.

Note that when you watch poker and baseball on TV, you see mostly men playing them. Are crossword puzzles—which are every bit as popular among women as men, if not more so—running the risk of alienated a big group of solvers by skewing male in the content? Probably to a degree, yes.

Four stars from me. Well-executed theme, particularly with the apt GETS THE BALL ROLLING start to it. 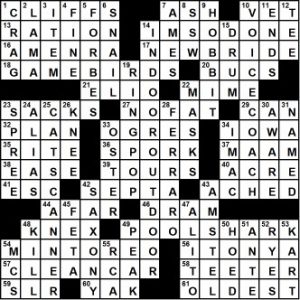 THEME:
The reveal is key here:

The themers, arranged in a pinwheel, come at us thusly:

Even with all that theme, Editor Steinberg, using the pinwheel to his advantage, has managed some nice fill:

With nothing much to complain of anywhere. Nicely done! 4.2 stars.

August 18 is Evan’s wedding anniversary, and he took advantage of his bully pulpit to send a public note to his wife. The puzzle notes say “Make some rearrangements to spell my note to my wife, whose name you’ll find in this puzzle.”

His wife is VICKI JONES; she appears at 65a and 68a, clued as [Gotham City journalist Vale (and my wife’s first name)] and [Marvel superhero Jessica (and my wife’s last name)], respectively.

The rest of the theme answers have numbers in the clues and circles in the answers: 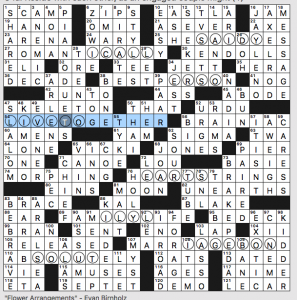 I figured out that there were anagrams  in the circle. I got LILAC and ROSE and then I got stuck, and then I had to leave town for Lollapuzzoola. Jim Peredo bailed me out. The anagrams are DAISY, LILAC, ROSE, VIOLET, ASTER, LILY, BEGONIA, and LOTUS. That’s not a phrase. Jim figured out that if you take out the letter indicated in the number of each theme clue, those letters spell I LOVE YOU. Awww.

Evan and Vicki won the pairs championship at Lolla on Saturday! Happy Anniversary to you both!

What I didn’t know before I did this puzzle: never heard of a MARRIAGE BOND. 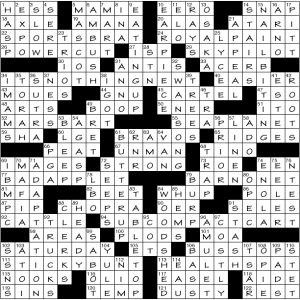 Each theme answer  has an extra T with wacky results.

This is a solid, amusing theme.

A short review tonight – Lolla was fun and I am tired. Good night!

Jim P here once again, filling in. Let’s look at the theme entries before we discuss the theme. 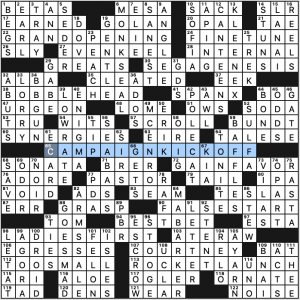 So let’s see if I have this straight. The theme is phrases whose first letter is also the first letter of another word that clues it? Am I missing something? Because that feels very, very loose.

I could go on (and on). Do you see what I mean? There are very few constraints here meaning the theme in and of itself is rather unsatisfying.

But if you were to solve this as a themeless, it’s much better, especially once you include some of the surrounding stellar fill like: FINE TUNE, EVEN KEEL, SPANX, SYNERGIES (somehow the plural makes this oft-used business term even more esoteric), GAIN FAVOR, BEST BET, COURTNEY, TOO SMALL, MONK SEAL, CANTEENS, KLEENEX, POLE CAT, LOW RATE, MCENROE, BAFFLES, SEA BASS, ARMS SALE, GOES MAD, and MA BARKER. Wow! That’s a lot of good stuff.

There are a few rankling entries, mostly centered around GAIN FAVOR for some reason. I had trouble with the G in ORIG [Copy machine insert, briefly]. Maybe because “briefly” implies (to me) that it’s something people say, which in this case they don’t. If the clue had been [Copy machine insert, abbr.], I think that would have made more sense. The other two I had trouble with were SULFA [Antibacterial drug] (never heard of it) and VILAS [Argentine tennis star Guillermo] (never heard of him). But beyond those, any other little nits I encountered fell well within the noise.