Peter Gordon, of Blazingly Hard Fireball fame, brings us a Monday NYT, not a category known for being blazingly difficult. I found this a smidgen harder than the average Monday. I liked the theme, which was Monday-accessible.

All the theme answers are denoted by asterisks. 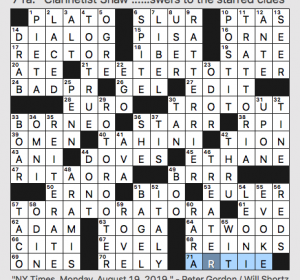 I noticed the plethora of Ts as I was solving and hadn’t figured out what that meant. There’s a revealer at 71a: [*Clarinetist Shaw … or, when said aloud, the only two consonants in the answers to the starred clues], and the answer is ARTIE. This is a reasonably satisfying “aha” moment for a Monday puzzle. It’s a heck of a lot of theme material for a weekday puzzle, even one that’s a smidgen bigger (it’s 16×15). There are a couple of obscure answers – or at least they seem obscure to me. Geography is not my strong suit and I’ve never heard of the ORNE River. I have heard of EULER and I know he used to be on one of the Swiss franc bills; that seems a bit much for a Monday.

What I didn’t know before I did this puzzle: see above re: ORNE. 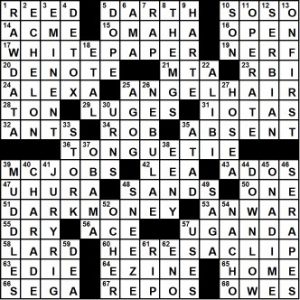 THEME:
The reveal explains all:

That’s a lot of horizontal theme. Elsewhere, we find:

RAW DATA, ON FIRST, NEBULAE (not in my vocab), A TAD (I’ve grown a tad tired of this answer), JURY-RIG, DOWN LOW, ON A DIME.

All in all, it’s a pretty fair fill.

He brings us an (ironically) clean grid of idiomatic phrases where the last word is a word roughly meaning a top layer of earth. 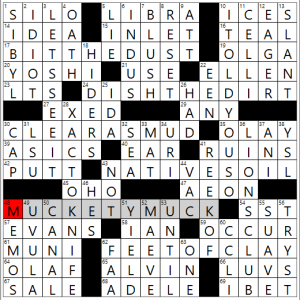 Most of these work well enough for me, even the dust one, but I’m still not sure about that muck entry. I suppose it’s close enough.

The fill is strong with this one, especially those long Downs: “LET’S SEE IT!,” “I TOLD YOU SO!,” X-ACTO KNIFE, and LION’S CLUB.

My old nemesis, SST [Mach 2 flyer of the past], shows up again, as does URI [Swiss canton]. Those cannot be fun on a Monday for any newcomers to the crossworld.

I’ve picked some nits, but on the whole, this is a fine puzzle and a good Monday outing. 3.5 stars from me. 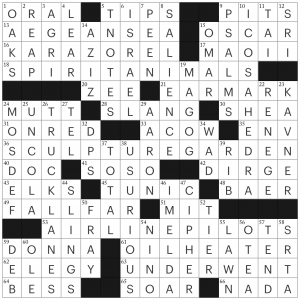 Sorry to miss Lollapuzzoola this year – I was off solving a different sort of puzzle event, the Miskatonic University Game.  While some of you were racing through grids, I was racing through the North Shore area of Boston solving a Lovecraft-themed set of puzzles for about 36 hours.  I’m looking forward to solving the set at my leisure, once I get some actual sleep. 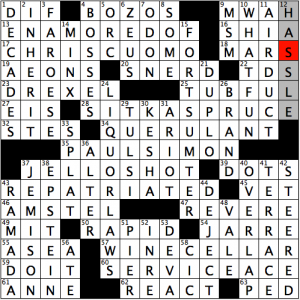 After solving Down Clues Only at Lollapuzzoola this past weekend, I decided I just hadn’t had enough, so I solved this one Downs Only too.

A spicy stack in this one, with SITKA SPRUCE / QUERULANT(!?) / PAUL SIMON / JELLO SHOT [Jiggly belt?] / REPATRIATED running through the center of the puzzle and crossing some other long entries like LIQUOR LAWS [Things that dictate the spirit world] and FORT SUMTER.

I didn’t think the O.D. ON clue worked: O.D. ON takes an object, whereas [Party a little too hard, say] doesn’t

Three cheers for the [Alma mater of puzzle maker Evan Birnholz], DREXEL! If you haven’t solved the latest WaPo Sunday puzzle, go do it now (and bring some tissues).

That’s all. Until next time! 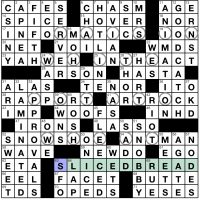 Each of four rows in this puzzle had alternating circled letters (sliced, if you will) which gave us the names of four standard types of bread. Nice!

Random thoughts:
– Literally the only “woman” in the grid is MRS Doubtfire who only dressed as (but didn’t identify as) a woman in the movie. I’d hope for more than zero women in a grid published in 2019, even amongst the cluing.
– The fill was largely clean, so no complaints there. Quick solve, especially once I saw the trick to the theme.