Our instructions tell us we’re looking for “a noted U.S. politician of the past.” Okay. The theme answers seem obvious—the longest Across entries. 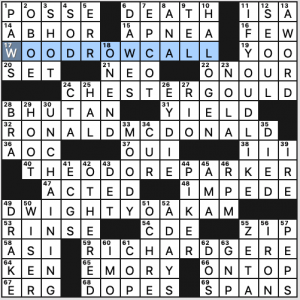 Those are a lot of white dudes. How are they going to lead us to another (presumedly) white dude of the past? (Don’t tell me; I know it’s obvious, but I took the long route.)

Whenever the theme entries are multiple words, I tend to start by looking for anything spanning those words. Not seeing anything outright, I did spot WORD going backward in Woodrow, and there’s A WORD over at 13d. But there’s not much else.

I also noted the initials of each guy. WC is a water closet and TP is toilet paper… Hmm. Is that the theme? Nope. Nothing else works.

Okay. Time to double back and look at the title. “First and Foremost.” Oh, and we have names, so let’s look at the first names.

Duh. Starting off with Woodrow, it seems pretty clear what we have to do. These are U.S. Presidents in hiding.

Now, let’s see if those last initials get us anything: W-A-R-R-E-N. Aha! Elizabeth Warren, right? Well, no, not really. She’s not a politician of the past. And although it would have been nice to have her as the contest answer to balance out all the guys, she doesn’t fit thematically, i.e. Warren is not her first name. 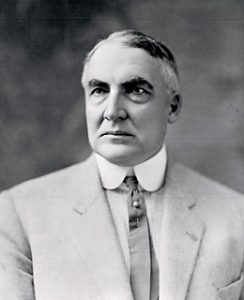 So we’re looking for someone with the first name of Warren. Oh. Duh, again. President Warren G. Harding. 1921-1923. Widely regarded as one of the worst presidents in U.S. history. His legacy is one of scandals and affairs. But he did give us one thing—the word “normalcy.”

A fairly straightforward meta, don’t you think? But I have to say how impressive that grid is with six long theme answers. Six themers is a tall order, and to have to find relatively famous names that all fit symmetrically makes it taller still. There’s a grand total of 74 squares of theme material. That’s a heckuva lot to have to deal with, leaving very little wiggle room for our intrepid constructor.

So if there are some less-than-stellar entries (A DAYS, PIKER, CDE, etc.) they can easily be forgiven. In fact, it’s amazing how smooth the grid is considering all that theme.

And that about wraps it up for me. What’d you think?