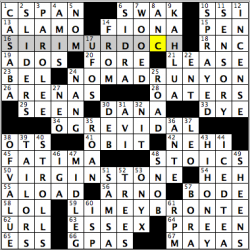 Good day everybody! Here is hoping you are all doing well and, for those who were able to make it out to New York City for the Lollapuzzoola crossword tournament this past weekend, I hope you had a wonderful time! Apologies if you were there and I was not able to say hello. Oh, and there’s still time to buy the puzzles and be part of the at-home division. The puzzles are beyond top-notch!

Also, there’s a wonderful article that recently was published in Wired that explores the currently world of crossword puzzles and how a number of young crossword savants, who already have earned luminary status in our world (at least in my opinion), are moving the needle in terms of having better representation, through entries and their cluing, being reflected in crossword puzzles. Both Laura (Braunstein) and Nate (Cardin) of DoaCF are quoted in the story, and a number of our good friends are also quoted and/or mentioned in the story, providing wonderful analysis and perspective. Please give it a read!

If you’re still with me, good deal! Today’s grid is fun with puns and anagrams, as well-known authors are reimagined by anagramming their first names and creating some funky puns with wacky clues!

It is definitely possible that without knowing Siri (Iris) Murdoch, as her name did not ring a bell to me when seeing the clue, a couple of that entry’s intersecting entries could have also been tough to get, especially SIDRA (6D: [Gulf north of Libya]). SAMSA also falls into that category, but I have come across that name a couple of times and put it to memory enough to have been comfortable that that was indeed correct (51D: [Gregor of Kafka’s “The Metamorphosis”]). Though the number of three-letter entries/crosswordese might not have been palatable, that also created some fun long downs on the edges of the grid, with OF VALUE (38D: [Worth something]) and INCENSE standing out from those entries (12D: [Fragrant smoke]). (My father loved to buy incense for the apartment in New York where I grew up, and I think I might need to stop some place to get a pack!) Loved the cute clue that accompanied HI, HONEY (43D: [Beekeeper’s lovey-dovey greeting?]). Haven’t had some White Castle SLIDERS in a good, long while, and I think that needs to change…and soon (2D: [Little burgers from White Castle]). No pickles please! (Yes, I’m a little weird!)

“Sports will make you smarter” moment of the day: DYE (33A: [Use henna]) – One of the 118 players in history to hit a home run in his first Major League at-bat, former professional baseball player Jermaine Dye is known for being a run-producing outfielder in the late 1990s and moving into the first few years of the 21st century. His biggest achievement came in 2005 while a member of the world champion Chicago White Sox, as he hit .438 in four games of the 2005 World Series and was voted World Series Most Valuable Player as the Pale Hose defeated the Houston Astros to win the franchise’s first Fall Classic since 1917. Dye made two All-Star Games, including in 2006 when he hit .315 with a career-high number in home runs (44) and runs batted in (120) while finishing fifth in the American League MVP voting. 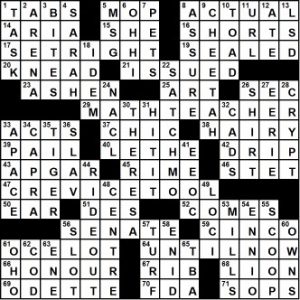 THEME:
For asymmetric reveals tell us something about four symmetrically placed longer answers. Each of which contains letters that, when rearranged, spells out a type of cat:

Elsewhere, the pros and cons appear to be:

Certainly, this is unusual. And, I have to say, I’d never head or seen the term CREVICE TOOL, even though it gets 1.5 million Google hits. 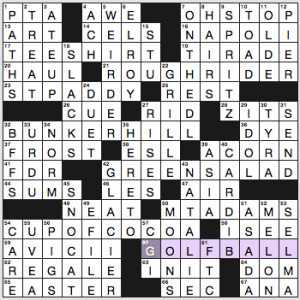 A rather standard theme in early-week newspaper crosswords involves the first word in each theme answer being something that can precede or follow another word, which is typically spelled out in the theme revealer. Evan’s got a fresh twist on it by having unrelated themers that start with places on a golf course—but the revealer is an object that you’d physically find at those specific places, a GOLF BALL clued as [Sports item that can be found at the starts of 17-, 21-, 32-, 42- and 54-Across]. This adds a visual oomph that’s missing from the usual sort of “first word”-reliant themes and it takes you through a logical progression on the links. Here are the GOLF BALL sites:

The individual theme entries are pretty good by themeless-fill standards, and the theme’s conceived and executed quite well.

The overall fill is more or less on target for a Tuesday. 4.5 stars from me, and that’s really pretty rare for a Tuesday puzzle. 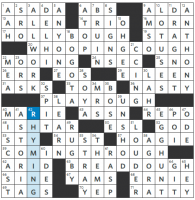 17A: HOLLY BOUGH [Object used to deck the halls]
20A: WHOOPING COUGH [Disease also called pertusis] – Get your kids vaccinated, STAT! These diseases should have long been eradicated, and people with compromised immune systems are relying on the rest of us to establish herd immunity!
37A: PLAY ROUGH [Wrestle, say]
59A: COMING THROUGH [“Out of my way!”]
63A: BREAD DOUGH [Rye before it rises]
42D: RHYMING [It’s not exemplified by this puzzle’s long answers]

Does anyone remember those old commercials for Hooked on Phonics, which alleged to teach children how to read based on a phonetic understanding of the English language? One can only wonder how they tackled a set of words like these!

This puzzle’s five themers each end with words that are eye rhymes of each other – words that look like they should rhyme, but decidedly do not. That is indeed some “Eye Poetry”! Nice, lovely puzzle.

Random thoughts:
– After getting the first four across answers, I thought the theme was going to be starts-with-A!
– Women in the puzzle today: EILEEN Ford of the Ford Modeling Agency; Lara Croft TOMB Raider; MARIE Curie, “the first woman to win a Nobel Prize, the first person to win two Nobel Prizes, the only woman to win in two fields, and the only person to win in multiple sciences” per her Wikipedia page; suffragette extraordinaire Susan B. ANTHONY; and MRS.
– 50A: ESL isn’t always a [Subj. for immigrant students]. Many immigrants to the United States come from English-speaking countries or have already learned English in their country of origin. 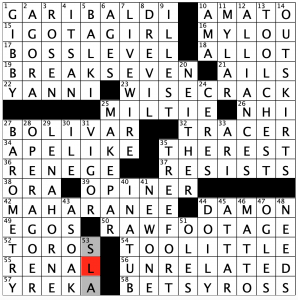 We have a themeless by Matt this week, and I forgot to start my timer again, so I have no idea how long this took! I would guess around 5-6 minutes, as I didn’t find it horribly thorny. Per a Jonesin’ puzzle, there is lots of fun stuff in here, and a few things I’ll bet you didn’t know. At least I didn’t! 4.4 stars for Puzzle 930, which means there is not only 950 looming but puzzle 1,000 is less than a year away!

I’ll stop there. Another Jonesin’ next week! 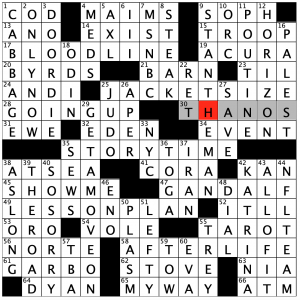 Is this the first collaboration by these two K/Ch-ristians? If so, they have my permission to make plenty more of these! This one is a fairly common theme type, and the revealer is the last themer:

Lotsa fun! We are all familiar with the phrases life blood, lifeline, life jacket, etc. Not too difficult, but it is Tuesday. 4.3 stars for this one.