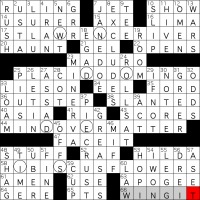 hello and welcome to episode #585 of matt gaffney’s weekly crossword contest, “Words of a Feather”. this week, matt challenges us to name an 8-letter word. what are the theme answers? four long across answers have parenthetical numbers in their clues:

in addition, the last across answer tells us what to do, sort of: {Give a talk without adequate preparation…or, how to find the meta answer} WING IT. i didn’t need this hint (on top of the pretty hefty nudge from the title) to notice that there were birds hidden in each of the long answers: WREN, DODO, DOVE, and IBIS. but it was useful to focus on just the “wings”, or sides, of those birds—in other words, their first and last letters (circled in the screenshot above). taking those eight letters and reordering them 1 through 8 according to the parentheticals spells out DOWNSIDE, which is an 8-letter word, and also a punny description of what a bird’s wing is. so that elicited a little chuckle.

this is a fine meta, but it felt more like a week 2 than a week 3 (even a week 3 of 5). the mechanism was fairly clearly laid out in the clues and title. so i think this is one of the easier week 3s i can remember.

that’s all for me this week. what did you think of this one?