If this puzzle seems familiar to you, it may be because you’ve done it before. Due to a snafu on our site a couple weeks ago, we had this puzzle linked to on our “Today’s Puzzles” page, and I even went as far as writing and posting the review before I was made aware it was the wrong puzzle. So here it is again on the correct day.

Most of what follows is what I wrote back then.

Our theme takes common words ending in -STERS and re-defines them based on the first part of the word. 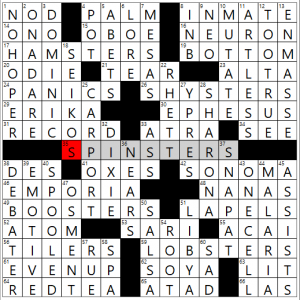 I like the play on words, but frankly, I didn’t get the “hip” connection. Adding “-ster” to something makes it “hip”?

“Hipster” ends with “-ster” but I’m not seeing how that relates to these entries.

So the theme confused me. I do like the title, and I think it’s sufficient to indicate what’s going on here. If the clues left out the “hip” aspect, the whole thing would have worked better for me.

In the fill I liked DOMINIC (my son’s name), “TOO TRUE“, CARPORT, SHARONA, EPHESUS, and MALARIA. I’m not so keen on NO HOPER and TILERS but DEBATER feels more legit. 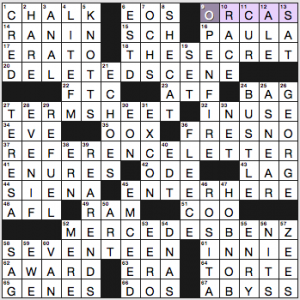 I don’t quite gEt thE thEmE hErE. I see that the themers with “E-___” clues contain no vowels other than E’s, but the relationship between the clues and answers has eluded me. Let’s take a look:

I find myself wishing that TERM SHEET and ENTER HERE had been dropped from the theme, as a five-piece theme is plenty and it would have allowed more wiggle room for the rest of the fill. Plural DNAS is awfully questionable, the EOS SCH ESTD OCHS SHECAT chunk is also unfortunate, and there are still more abbrevs throughout the grid (FTC ATF AFL EDT). Plus there’s OOX, -ERN, ‘ENRY, and variant ENURES. Too much!

The grid perked up with LITE FM and HOBNOB, but overall I think the theme density crowded out more good stuff.

Theme: Comedic partnerships meet up at the corners of the grid. 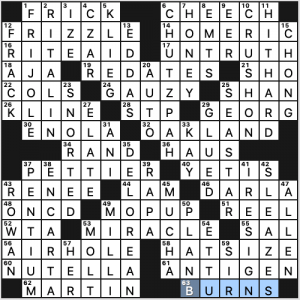 Nice theme and a well-executed grid. I love the grid design.

I wonder what other partnerships were considered. Laurel and Hardy seem like they could have fit in well. Hope and Crosby as well. But finding a symmetrical partner for Abbott and Costello probably wasn’t possible. And I would have loved to have seen a more modern example like Key and Peele, but again, a symmetrical partner would be needed.

Some snoozers snuck in there, though. I could do without ever seeing AJA [Steely Dan’s best-selling album] again. REDATES is roll-your-ownish. KLIEG [Filming light type] was hard because of its crossing with FRICK and FRIZZLE. EDDA is tired crosswordese made worse into plural EDDAS. But it’s all a balancing act, and with the solid theme and that boatload of strong fill, these few clunkers are okay. 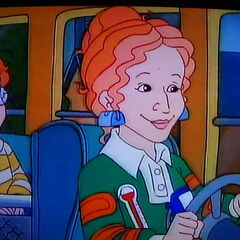 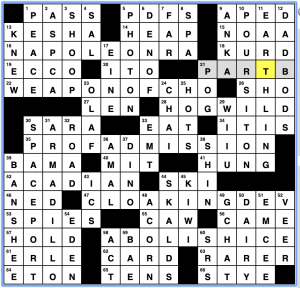 This week’s AVCX had an interesting headnote that, after solving the grid, totally goes along with the theme.  Ben Tausig noted that this week’s constructor, Laura Braunstein, was “donating her payment from this puzzle”.  Let’s look at the grid to talk about why:

Each of these answers features a more common phrase that has “abolished” ICE – NAPOLEONRA, WEAPON OF CHO, PR OF ADMISSION, and CLOAKING DEV.  As noted in the revealer for this puzzle, ICE has implemented policies that have torn apart families and placed children in cages along the border, and it needs to be completely abolished.

In line with this, Laura is donating her payment from this week’s puzzle to the Refugee and Immigrant Center for Education and Legal Services (https://www.raicestexas.org/), an organization that provides free and low-cost assistance, advocacy, and legal services to under-served refugee and immigrant families and children.  I think this is fantastic and encourage you to donate as well if you feel similarly.

Elsewhere in the grid: it was great to see a 30-50 feral hogs reference for the clue to HOGWILD, KESHA‘s “Rich White Straight Man” (which I tried to attribute to LIZZO), and DADBOD show up in the grid. 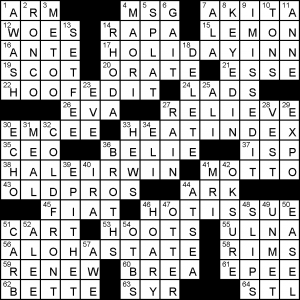 A 60th anniversary for America’s 50th state – the ALOHASTATE, Hawaii. As good a reason as any for an H/I initials theme. There are five themers (plus a revealer), but they’re on the shorter side: HOLIDAYINN, HOOFEDIT (the weakest entry, IMO, though the shorter theme entry lengths is probably why it’s here), HEATINDEX, HALEIRWIN (with a US Open fake-out since the tennis tournament is next week), and HOTISSUE.

As with most puzzles with Zhouqin’s name on them, there is a lot of interesting fill worked in outside of the theme (regardless of it being quite busy). METOO is a bit more than just an [Anti-harassment movement], anti-abuse/rape too? COLDFRONT and IMISSEDIT are the longer down pair. I personally liked seeing RAPA Nui; strangely, despite its letters, MOAI has never appeared in any puzzle I can find.

Clue of the puzzle: [Have more People come to the house?], RENEW, even though variations of this pun have been done before, it felt like a fresh wrinkle.