This duo has come up with quite a few puzzles lately, including last Saturday’s WSJ with its WET/DRY theme.

Here we’re presented with two circled letters in each theme answer. These letters are IN in the actual theme answers, but in the crossing Downs, they become whatever two letters are needed to create the theme answer’s opposite. Does that make sense? I thought not. Let’s take a look. 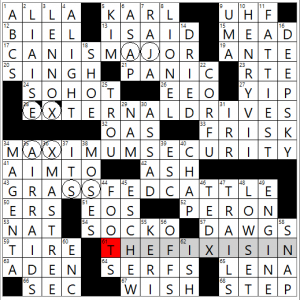 All this is revealed by THE FIX IS IN at 61a [Outburst on discovering a rigged game, and how to “correct” the circled letters].

Based on that revealer, it seems like the “correct” answers should be the IN versions. However, Across Lite didn’t like that and made me switch them all to the other versions.

Be that as it may, this is pretty darn clever. Finding opposite words that differ only at the IN is not something I, or probably most people, have ever considered. Finding this set—”major” to “minor,” “external” to “internal,” and “maximum” to “minimum”—is cool enough, but discovering”grass” to “grain” is nothing short of a cherry on top. A very nice find!

However, my problem is that I’ve never heard the phrase THE FIX IS IN. I was staring at THE _I_ IS IN for a long time, and I thought it was going to be a play on “the jig is up.” Plus I’d never heard of TEDX and I had SERBS instead of SERFS at 64a, so it took me a while to sort it all out. And then to top it off, Across Lite didn’t like the IN versions, as I mentioned above, so it all ended on a down note.

But that doesn’t take away from this clever theme and its wonderful execution. Often when I see a neat theme, I say, “I wish I’d thought of that.” But this time, I don’t think I ever would have thought of it. Well done.

SO HOT doesn’t feel synonymous with its clue [“Ooh la la!”]. In fact it doesn’t feel like a legit phrase at all. And there seemed to be quite a few clunky short entries (EEO, IRR, OAS, EOS, ERS), but there wasn’t quite enough of them to become a distraction.

New to me is DEEP SKY [Outside the solar system, to astronomers].  It’s always nice to learn a new science term. 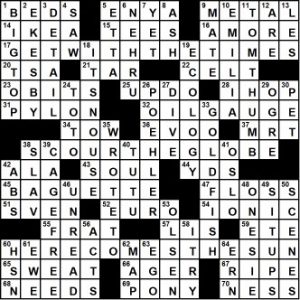 THEME:
Phrases punnily clued to lead back to newspapers:

The theme strikes me as simultaneously straightforward and punny/funny, with good, solid fill. Otherwise:

EMILIA and TOM THUMB ARE … IT’S NO USE.

In ECOLOGY Amy POEHLER can DIVE with the PET GOLDFISH WHO WROTE TO the CAGE-FREE chickens in their ONESIEs who did SIT-UPS at IHOP.

That’s AMORE at IKEA for ENYA with her UPDO and her OIL GAUGE BAGUETTE. 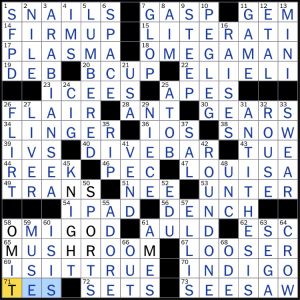 Figuring out what was going on in Emily Carroll’s grid for this Thursday’s NYT made this highly charming, especially when I finally cracked what its fairly straightforward revealer fully meant.  Let’s kick off with that, since it makes explaining the rest easier to walk through:

I love a good DIVE BAR as much as I like a fancy cocktail bar, so that was an easy fill-in, and it helped me figure out why a few clues throughout the grid didn’t quite make sense when I took them as only the across fill:

All of these don’t quite make sense given their clues.  Bringing the DIVE  part of this back and looking at the down clue for the last letter of each answer, we can spot the BAR part:

Each of these is a type of BAR (SPACE BAR, MINIBAR, SPORTS BAR, and CROWBAR), and each finishes the correct phrase for the answer: SNAIL’S PACE (extremely slow speed), GEMINI (sign of spring), TRANSPORT (conveys), and ESCROW (something to hold money in).

Ripping through the rest of the grid, I really liked LITERATI and OMEGA MAN in the upper right corner, KNIGHT defined as “Mail man?”, ANTITHESIS running down the lower left, and getting an excuse to post some Eurovision for IS IT TRUE.  Here’s Iceland 2009: 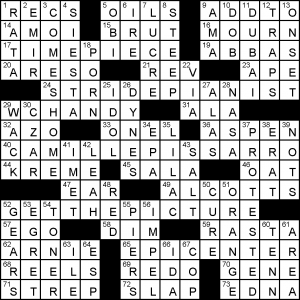 Today feature’s another hidden letter string theme. Today’s string is EPI. It has a few wrinkles that make a bit more elegant. The revealing answer, EPICENTER, tells us to look for EPI. Unlike many themes, EPI is in the exact centre each time, appropriate for the idea of an epicentre. The puzzle’s theme entry lengths are ambitious: 9/13/15/13(/9). I wasn’t that familiar with central answer CAMILL(EPI)SSARRO; TIM(EPI)ECE is more prosaic, and the theme is rounded out with STRID(EPI)ANIST and GETT(EPI)CTURE.

With so much theme, expect a grid under strain. The most obvious place is RECS/AMOI/ARESO/RATA/EMIR which is quite a cluster. 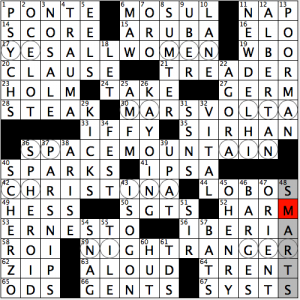 Today we get five words/phrases whose edges spell out the name of a country. Like so:

Exceptionally elegant that the countries are all split the same way (first two letters / last three letters). All five theme entries are solid phrases, and I liked seeing ALBERTAN, NEW DELHI, O HENRY, and SCHERZO elsewhere in the grid.