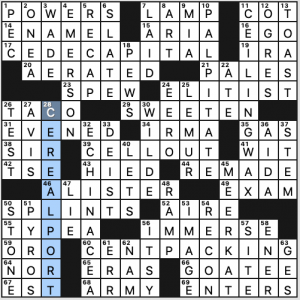 The first three are solid if unexciting, but the last two are worth the price of admission. I like the consistency of the soft-C homophones throughout.

Entries like EERO, HIED, and AIRE irk me, but there’s more than enough to counterbalance them. Goodies include: ELITIST, EMERSON, MEERKAT, PALPITATE, and ECHINACEA.

Is that a dupe I see in TYPE A and A-LISTER? I suppose it’s pretty minor, but they are rather close together (46a and 55a).

Cluing felt a little more Thursdayish than Wednesdayish, or maybe I’m just having an off day. But I did note these few:

Fun wordplay in this theme and some strong fill. 3.75 stars. 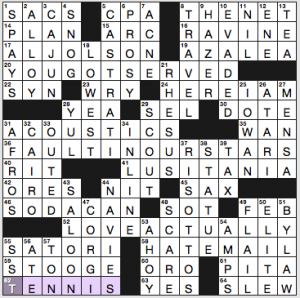 The US Open has begun, Serena has already walloped Sharapova yet again (complete with her husband trolling Sharapova by wearing a drug-abuse prevention T-shirt), and the puzzle’s theme relates to 62a TENNIS. The other four themers include words that are tennis terms:

I’m not wild about the inclusion of those lively 8- and 9-letter Acrosses—AL JOLSON, ACOUSTICS, LUSITANIA, and HATE MAIL—since they look more like themers than the 6-letter themers do. Also not keen on the YEA/YES overlap.

Theme: PR MEN [Some image polishers, or a hint to the starred clues and their answers’ initials]. In other words, our theme is famous men who have the initials P.R. 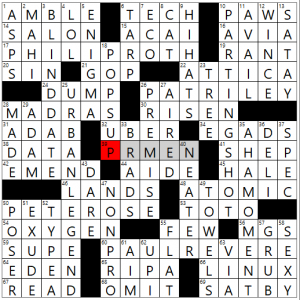 At first I was thrown off by the unusually descriptive and biased clues. But then the penny dropped and I got the joke. Each clue was purportedly written by a PR man. Ha! I love the creative twist! Makes for a great PREMISE for the puzzle. It even makes the problematic entry of PETE ROSE a non-issue.

But speaking of him, I was wondering what he did that was so bad (I couldn’t remember). Wikipedia tells me he was caught betting on baseball, even as a manager, for years and that he denied doing such. He eventually fessed up in 2004 (as alluded to in the clue), but “the issue of Rose’s possible reinstatement and election to the Hall of Fame remains contentious throughout baseball.” I get that what he did was wrong. But there are a lot worse things that star athletes do. A lot worse. Should PETE ROSE still be so vilified? I’m just trying to understand here; I’m not trying to plead his case by any means.

Back to the puzzle. The theme entries are relatively short, so that leaves room for a bunch of fun fill which Ms. Ellerin delivers in spades: BLIND DATE, PARTING SHOT, URBAN LEGEND, and the crossworder’s favorite, AHA MOMENT. Also on the plus side: ENIGMA, OXYGEN, POPS UP, and LINUX.

All told, though the theme is fairly straightforward, it’s spiced up by the creative clues, and the strong fill throughout, making this a fun and accessible outing. 3.8 stars. 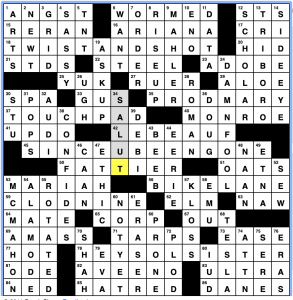 The theme in this week’s AVCX from Aimee Lucido is masterfully executed and has a great throughline:

Somehow, “Since U Been Gone” is 15 years old, and Aimee’s found a way to remove the U from four other songs in ways that make amusing theme material.  “Twist and Shout” becomes TWIST AND SHOT, “Proud Mary” becomes PROD MARY, “Cloud Nine” becomes CLOD NINE, and “Hey, Soul Sister” becomes HEY, SOL SISTER.  That last one doesn’t twist the original meaning as much as the others, but it’s a solid set all around.

Elsewhere in the grid, I loved seeing ARIANA Grande crossing a clue for WANT referencing the lyrics of her Rodgers-and-Hammerstein-referencing song “7 rings” (6D, “I see it, I like it, I ___ it, I got it”), and I liked seeing SIDE EYE and DAMN FOOL sprinkled through the down fill. 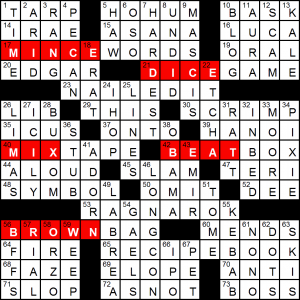 The fairly generic RECIPEBOOK is used to indicate that a further five answers start with verbs associated with cooking instructions. It’s a fairly long list to pick from (cream, stir, fry etc. etc.), but the answers chose all lead to interesting answers. The answers are shorter than usual, but quite punchy: MINCEWORDS, DICEGAME, MIXTAPE, BEATBOX and BROWNBAG.

RAGNAROK is a good long across entry choice (as long as or longer than most of the themers). LONGCON is another interesting non-theme entry; I wasn’t familiar with the term, but it is inferrable. Also did not know MASCIS (Dinosaur Jr. is a big enough band that many people remember its members?), and of all the MOORE‘s I do know, boxer Archie is not one…