SMALL POTATOES is our theme, as revealed at 37a [Insignificant thing, or what can be found four times in this puzzle]. It turns out this is a rare rebus puzzle with small representations of potatoes in four of the grid’s squares. 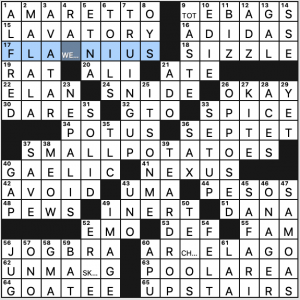 There are some issues here. A skin or wedge isn’t really a small potato unless it’s preceded by the word “potato,” so it seemed like mentally adding “potato” was part of the theme. Thus you would get potato skin, potato wedge, and potato chip. All good. But you would also get “potato tot” which absolutely isn’t a thing in that form (“tater tot” yes, “potato tot” no). So that felt like an inconsistency.

Second, TECH IPOS. Is that a phrase? Googling in quotes yields 167k hits which makes it feel legit, but it sure was hard to parse. Thankfully the crossing ARCHIPELAGO was crystal clear.

Not so the case (at least not for me) with the WEDGE rebus. I finished the grid with the one empty square which I assumed was the rebus in FLA_NIUS crossing RA_. The clue [Brilliant but troubled soul] had me wondering if this was the proper name of some old Roman I hadn’t heard of, and the down clue felt completely unhelpful. It took a few minutes of cogitating to finally realize that the last part might be GENIUS which led to RAW EDGE and the aha for FLAWED GENIUS. For me, this felt to be about as tough a rebus crossing as I’ve encountered. I won’t go so far as to say it wasn’t fair, but boy it was hard for me to see.

There were also a couple questionable items in the fill. POOL AREA feels rather “green paintish,” and I’d never heard of a JOGBRA. “Sports bra” yes, but JOGBRA no. I’m not saying it’s wrong, just that I’ve never heard of it. I’d welcome comments from those more knowledgeable on the subject.

But there’s a lot of good stuff to admire as well, like starting off with AMARETTO and LAVATORY crossing ALFRED, MALALA, and AVATAR. What a strong corner! We also get SIZZLE, “IT’S ON ME,” TEAR-DROP, NEPALIS, SAFARI, ONAGER (I happen to like this entry though some don’t), yummy SAMOAS, and UPSTAIRS. I’ve also seen GOATEE a lot lately—like three times in the past week, I think.

All my nits aside, I did like this puzzle with its surprising rebus theme and its strong fill and cluing. 3.8 stars. 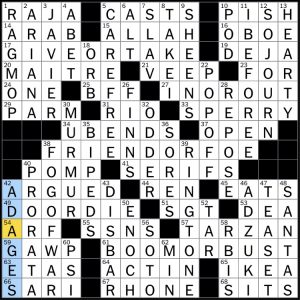 Jeff Chen has this Thursday’s NYT, and this week’s out-of-the-box theme feels a little more standard:

It’s a pretty straightforward theme (CAREGIVER or CARETAKER, SHINED or SHOUTED, etc.) elevated by the cluing elsewhere in the grid.

Good Eats is back, so let’s all take 20 minutes to learn how to properly make Chicken PARM.

THEME: Phrases that include items that can be used as “tinder,” clued as if they are part of a Tinder profile. 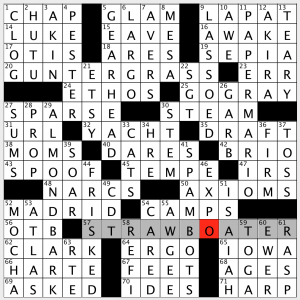 I was excited when I saw the title. I’ve been toying with the idea of constructing a puzzle with a “Swipe right” or “Swipe left” theme, but haven’t figured it out. 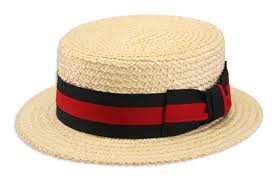 I wore one of these when I was in “The Music Man” in high school!

This one fell short, mostly because the themers were not all that exciting to uncover. That could be me: I haven’t read GUNTER GRASS, never heard of PAPER MARIO in all the Super Mario iterations, didn’t realize that the classic barbershop quartet hat was called a STRAW BOATER, and if you asked me to name types of nutty candies ALMOND BARK wouldn’t have made the top ten. Also, two of the “tinder” words are at the start of the phrase and two are at the end- I wonder if there was a way to keep it consistent across the theme using more familiar/fun phrases. I would’ve preferred that.

And as far as I know (read: I know) one doesn’t caption each of his/her Tinder profile photos as the clue makes it seem. I appreciate what it’s trying to do- but it misses that mark. “Stuff that can be used as tinder” doesn’t feel like a strong enough concept on its own without referencing the dating app, but that’s just not how the app works.

GEARHEAD and SPAMBOTS were fun to find, but I was on autopilot for most of the puzzle. Overall, I would’ve swiped left on this one. 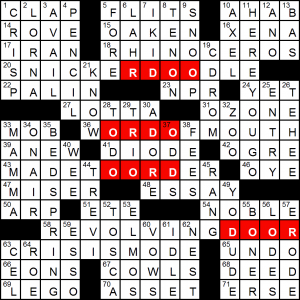 Today’s theme features another hidden letter string. The hidden letter string today is DOOR, but there is an extra wrinkle that makes things a lot more elegant. It is a REVOLVINGDOOR, and the hidden tetragram cycles from RDOO to ORDO to OORD and then to DOOR itself in the revealer.

I must say the closed off grid design was a good choice today, and limited the impact of the overlapping WORDOFMOUTH/MADETOORDER themers in the centre, which potentially could have put a lot of strain on the fill.

CRISISMODE and RHINOCEROS look like they’re part of the theme, but they aren’t! 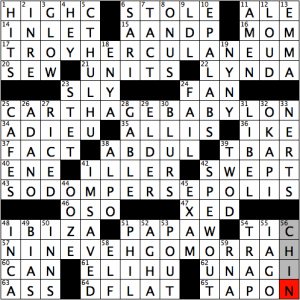 The title gives this one away a bit — “Old Town Rows,” a pun on “Old Town Road,” means we’ve got four rows comprised of “old towns” mashed together. Like so:

The titular pun wasn’t funny enough to justify this non-theme, which was repetitive to solve and didn’t really have an aha moment. Nothing bad in the fill, but not a ton to love either: I’M SAVED and CTHULHU were the only highlights for me. Maybe I’m just grumpy, but this was one of my least favorite BEQs in a long time.

The silver lining is that I get to post this: