This is another great offering from the Inkubator. I figured out the theme early on – or I thought I did! 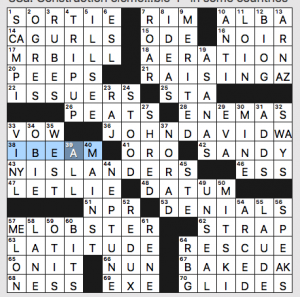 What I didn’t know before I did this puzzle: never heard of Crissle WEST. Did not know Heidi Schreck won an OBIE (for writing “What The Constitution Means To Me”). And I’m ashamed to say I did not know JOHN DAVID WASHINGTON. 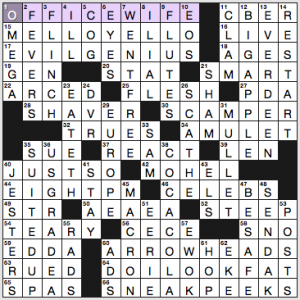 All right, I solved the puzzle while watching The Boys (an Amazon Prime Video show) and now the show is over, so let me summon up some puzzle thoughts.

Entries I like: MELLO YELLO (gross fluid, mind you), EVIL GENIUS, SCAMPER (such a great verb), JUST SO, MOHEL, SNEAK PEEKS, FLINCH (you ever play the card game Flinch? My sister, cousin, and I played it a lot at our grandparents’ apartment), COCA-COLA, Katniss EVERDEEN. 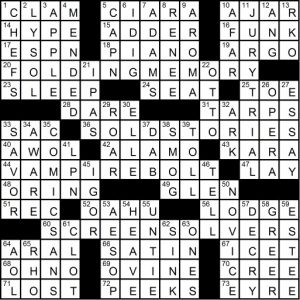 Well, the reveal reads in full as follows:

The problem being that this doesn’t reveal anything to me (yet?) regarding the four true theme entries:

I still feel a bit clueless. Is A=OL some logo-related AOLism? I did a quick search, but felt impaired in doing so for not knowing what body of general knowledge this theme comes from.

Anyhow, other stuff to consider includes JURY TRIAL and COMIC SANS, both excellent answers, and well-clued.

The rest of the fill is fine. CIARA felt new for me, though the database holds otherwise.

3.2 stars, trending upward if I can suss out the significance A=OL.

I flew through this one.

Not really. I floundered around with several of the sections. It was a worthy struggle and I enjoyed the theme. Joe gives us literal definitions of idiomatic phrases that involve birds. 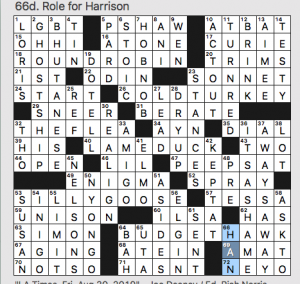 Fun theme! The theme wasn’t challenging; some of the fill was.

What I didn’t know before I did this puzzle: that NEYO has a song called “So Sick” and that Phil and LIL are twins on “Rugrats.” 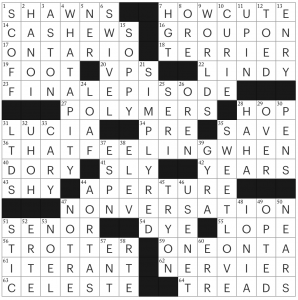 Elizabeth C. Gorski has today’s New Yorker puzzle, and this one feels like a rare miss for me.  Unlike the usual high-low blend I associate with the New Yorker’s themelesses, this was all squarely in the middle and kind of blah.

This left me underwhelmed, and felt like it was missing the literary/current events slant that this venue’s tended to take that have made it stick out to me.