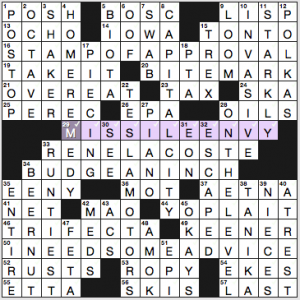 I got under 5 1/2 hours of sleep last night, so … let me phone it in tonight, and just remark on some stuff in the puzzle:

Wyna Liu makes her WSJ debut with this puzzle. Congrats!

She and Crossword Fiend’s Erik Agard are serving up a tricky one here. This one took some thinking, and I definitely needed the revealer to make sense of what was going on.

119a is TENSE EXCHANGE which is normally a phrase used to describe heated words between parties. But here it’s clued [Back-and-forth involving seven pairs of words in this puzzle’s starred answers]. Each starred answer is a two-word phrase that, at first glance, feels somewhat familiar but somewhat off. But with the help of the revealer, we realize each word in each theme answer was a verb that had its tense changed.

To understand better what’s going on, let’s look at one example: DRILLED BITE. The base phrase is clearly “drill bit,” but how do we get to DRILLED BITE? In the original phrase, “drill” is an adjective and “bit” is a noun. But both “drill” and “bit” are also verbs, one in the present tense and one in the past tense. Our constructors exchanged the tenses of these two words and then put them back together to create something new. Each phrase is like this with one past and one present tense verb. 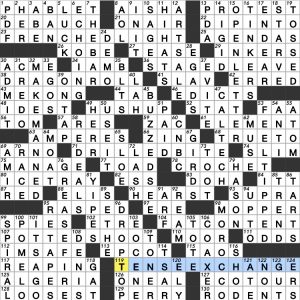 I’m super impressed with this theme which seems both simple and complicated simultaneously. Mostly what wows me is that our constructors realized these phrases existed that have two words that could also be verbs, that one is present tense and one is past tense, that the tenses can be switched, and that they can still make a believable phrase in the end. Those are quite a few hoops to have to jump through, and yet, they did it and it all works. Wow!

And the fill is nice and shiny, too. Some of the long entries are easy to confuse for theme entries, but they’re so good it’s hard to resent them. I’m looking at DRAGON ROLL, FAT CONTENT, OPEN LETTER, and GREASE FIRE. Plus AMPERES, MOROCCO, ICE TRAY, ART SALE, CAL-TECH, HUSH UP, and on and on. And opening up the grid with PHABLET at 1a is just plain fun.

To be sure, there are some gluey bits, especially the crossings of ARNO/AMIR and ETRE/SETHE but they’re all manageable.

It’s been a long day, so I’m not going to go into the cluing, but overall it felt lively and fresh.

Overall, a densely-packed grid that makes you earn your well-deserved reward. 4.5 stars from me. 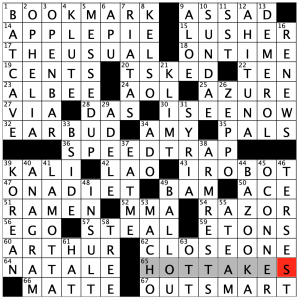 What a byline! Two puzzle stalwarts teaming up for a fun Saturday LAT challenger! Not too awfully hard (it’s no Stumper!), but still lots of cool entries. As always in a collab, especially in a themeless, I wonder who did what? This one took me just over 5 minutes, but I have had plenty of sleep recently! 4.4 stars.

My next LAT blog entry is Tuesday. See you then! 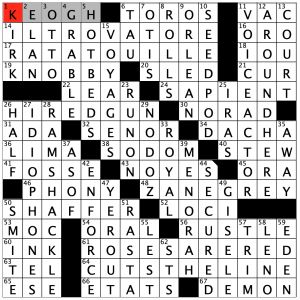 This one was a little more “Ruff” than a normal Les Ruff puzzle, but still managed to solve in under 15 minutes, which is a win for me. This grid has 72 words, which would be on the upper end for a themeless, so you would expect not too much crossword-y dreck, and there doesn’t seem to be any here. Although in a Stumper, you would expect some. It’s supposed to be hard! I got the SE area first, at least most of it, circled around, and I believe my last entry was 44D. There is an error mark in the grid image, if you look closely! Still a nice puzzle, Stan! 4.3 stars today.

Sure to please the bibliophiles! 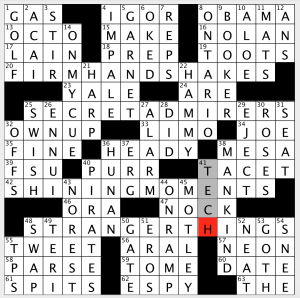 Quite possibly the most bizarre revealer I’ve ever seen… THE. Strangely, however, it’s necessary. I figured out the theme early and was wondering why the clues never mentioned that “The” was missing from the titles. And it was a laugh out loud chuckle filling it in as my last entry. So, weird- but sure!

All well known novels. All well known phrases. All plural. Very consistent and very much in my wheelhouse. A “right over the plate” puzzle.

A bummer that SNEE had to make an appearance in order to get THE in just the right spot. NOCK was another entry that feels dated. But at least the clue for 9-Down is still accurate as of today!