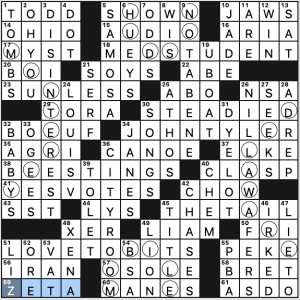 There isn’t a revealer with this theme, but the title is sufficient in serving that role. Using circled letters to define bite-mark shaped arcs, the puzzle spells out well-known American bays: HUDSON, MONTEREY, DELAWARE, and MOBILE.

Being a West-Coaster, I’m not as familiar with DELAWARE Bay; I think Chesapeake Bay gets more name recognition. As does, I suspect, San Francisco Bay over its neighbor to the south, MONTEREY Bay. But no doubt those longer names would have made the grid much harder to fill, and the shorter ones are certainly crossword-worthy, and they maintain the puzzle’s symmetry to boot.

With the theme answers as they are, the puzzle solves like a themeless and there are a number of goodies in the long positions: MED STUDENT, NOTA BENE, NILLA WAFERS, BEE STINGS, YES VOTES, JOHN TYLER, and LOVE TO BITS. I did not LOVE TO BITS DISINTEREST or STEADIED, but they are solid enough.

THE TAIL [Challenging thing to have a tiger by] feels like a long partial, and DYE LOT [Yarn label specification] though gettable, doesn’t seem like something most people would know about. Not being too involved with journalism, I tried COPY ROOM for [Where local stories are edited] before correcting it to CITY ROOM which I guess is a thing.

As always, SST is a lousy piece of fill, and the bottom right corner feels uncomfortable with PBA, AS DO, and LIE TO. And there are old crossword staples AGRI, OGEES, ABO, AD REP, and O SOLE.

Despite these negatives, I really liked the long fill and the theme felt strong enough to overcome them. 3.5 stars. 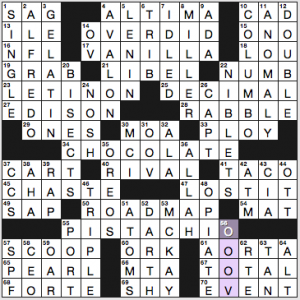 Aaaah! This theme is adorable. We’ve got three ice cream flavors (VANILLA is OK with cake or pie, CHOCOLATE is always the right choice, PISTACHIO I could skip). We’ve got the SINGLE, DOUBLE, and TRIPLE / SCOOP. And those three cones are represented visually as:

The theme is fresh and playful, and I found it delightful. It dispenses with full theme symmetry, as OPIATE isn’t paired with the TRIPLE scoop, AORTA isn’t paired with SCOOP, and that 2-letter OV desymmetricizes the diagram. I don’t mind.

What else? The fill’s pretty smooth, though it might feel a tad heavy on 3s and abbrevs (extinct MOA crossing Roman numeral MCI, blurgh). Those are offset somewhat by the assorted 7s in the grid, like COLUMBO, NIBLETS, and ALFREDO.

Rebecca Falcon here for my first time on Team Fiend!

THEME: Animals named after other animals 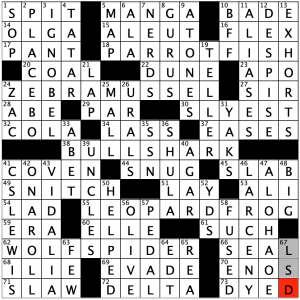 Fun idea for a theme – for me the clues really shined here with the answer choices less clear. Starting with three sea-animals made me think we were going all aquatic so was a bit thrown by the shift to amphibian and arachnid, but didn’t lessen my enjoyment too much, just left wondering why these 5 animals? Also, I believe PARROTFISH is usually a one-word animal, whereas the others are two-words – so some inconsistency – but not too bothersome.

I had a little laugh thinking about if we named these animals in different orders – I may have to start calling wolves “Spider Canines” or zebras “Mussel Horses”.

From a construction standpoint, some really solid work here, my fav area being the Southwest corner. That CS LEWIS / ON A ROLL/ VIDALIA stack is lovely. Personally, there is nothing I love more than fancy beautiful names for things that are not and VIDALIAs are a great example of that – then crossing it with COVEN? Loved it.

With how often ELLE shows up in grids, it would be great to see it clued more often as one of the impressive & famous women with that name, over the infinite magazine clues we tend to get. Model Macpherson – Actress Fanning – Singer King – all great options!

I’m giving this one 3.5 stars – for an overall fun solve. 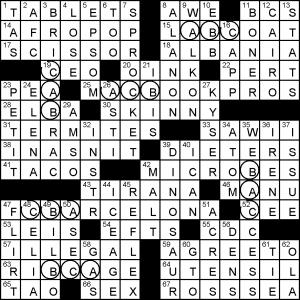 Hmm. Odd to have such a specific theme without a revealer. All six permutations of ABC are found circled in the theme answers. I guess six answers and a revealer is quite crowded, though. FCBARCELONA was my favourite of the theme answers, with the initial FC throwing me for a second. MANU is an underutilised four that made for a kind of soccer mini-theme. WEBACCESS was the least whelming, just a bit grey and technical. MACBOOKPROS is a forced plural, and the clue was cutesy rather than cute. There is nothing specific about MACBOOKPROS that means they are more likely to be on a teacher’s desk than other Apple products.

I’m not sure I could define AFROPOP, although the mention of Ladysmith lets me link to one of my favourite albums (Naledi ya Tsela). Ladysmith Black Mambazo are specifically isiCathamiya, which is an a capella singing style, though their many collaborations often feature instruments. 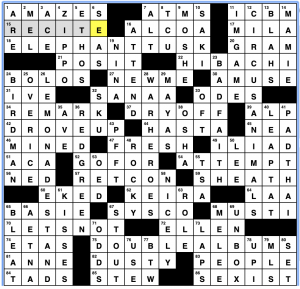 An unexpectedly long workday made the promise of a 2/5 difficulty crossword seem pretttty nice.  I think the difficulty rating on this guest grid from Chris Adams is spot on, and the theme’s pretty clean, too:

Crisply executed, each of these otherwise straightforward answers is comprised of the names of two albums, indicated by the parenthetical after the clue.

If you reference “We Will All Go Together When We Go” in your clueing, I will post it. It’s just the rules.

Keeping this one brief – I also liked HIBACHI and UNBOX