The Fireball is a contest puzzle. We’ll post a review once the deadline has passed. 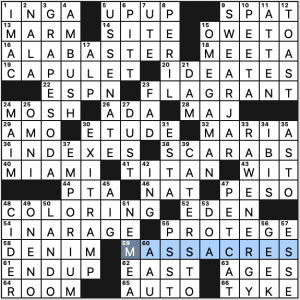 I didn’t get much entertainment value out of these. First off, it was confusing because in each case the first two letters are also the standard two-letter abbreviation of each state (which wouldn’t be the case if, say, TEXTILE was an entry). Second, the inconsistency between three- and four-letter abbreviations was off-putting. And third, none of these felt very engaging with the possible exception of the last one.

I love the long fill though: GRAPE SODA, SWEAR JAR (with a great clue [Where to give when you give a damn]), OMEGA MAN, EXIT RAMP, RAW ENERGY, and EMPORIUM. Only CATERS TO feels ho-hum. Plus, there are fun-to-say entries CAPULET and PROTEGE. US SENATE on the other hand would normally be an asset, but here I felt it was distracting, given the theme.

Other entries in the negative column: MEET A and PEETA, AT TEN and ONE NO, ING and AIG, and AAU (Amateur Athletic Union).

The strong long fill puts the grid in positive territory, but the theme only manages to be okay, not entertaining. 3.25 stars. 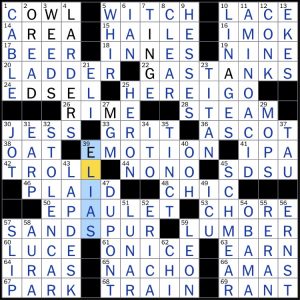 It took me a minute to figure out what all of the weird clues in Alex Eaton-Salners’ latest grid were doing, but once it cracked the rest fell fairly easily:

Look at all that fill above!  Such density!  Very theme!  W O W.

For each of the clues, you’re given a “more than” portion and a less than.  Taking 1A as an example, we want something that’s more than a bird (so, an OWL), but less than a facial expression (a SCOWL), so COWL it is.  The rest follow the same pattern.  I mapped it out and alas, the “less than” extra letters do not spell anything.

Given how dense the theme is here, I was pleasantly surprised at how smooth the rest of the fill seemed.  Sure, there were a few weird names like HAILE Gebrselassie, Laura INNES, and Henry LUCE running around to make the grid work, but there was also some lovely stuff like LARDERS, SCHMEAR, AMINO ACID, and STOLEN CAR floating around the grid, so I’ll take it.

More than a court filing, but less than a status change, it’s Carly Rae Jepsen’s EMOTION 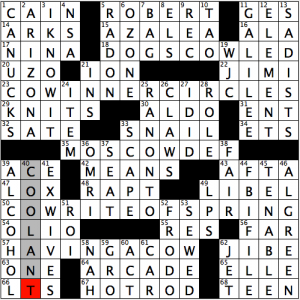 This one reminds me of that classic knock-knock joke:

Each of the theme answers is HAVING A COW [Freaking out, and a hint to the theme answers], in that the letters COW have been inserted into standard, in-the-language phrases to punny effect. Like so:

I can’t read [LOVE sculptor…] ROBERT Indiana’s name without singing it in my head to the tune of Gary, Indiana from The Music Man. And now you have this same disease — it is a curse I bestow on you all.

Simple, clean concept with a classic theme type. I thought the revealer would have something to do with editing, since I saw EDIT repeatedly popping up, but nope! I prefer PLAYED IT SAFE and JEDI TRAINING over EDITORIAL WE. In this type of theme, it’s far more elegant if the “hidden word” bridges the words in the phrase.

Fill-wise, I’m very confused as to why the commonly accepted spelling of DO–RAG is spelled as DURAG (I can’t find any usage of that in crosswords at all), especially when changing the U to an O makes SONS. Same goes for the BROS / D.O.D. crossing. Why not BRAS and DAD? 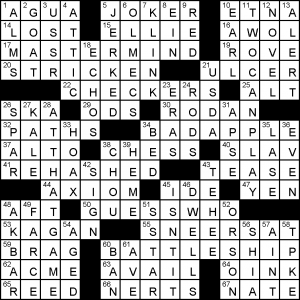 In contrast to yesterday’s puzzle, this one is all about the revealer, which occupies a whopping 20 squares. Because of that, you may potentially get to it quite early, as I did. It is a clever repurposing of TWOCANPLAY/ATTHATGAME, but the rest of the puzzle theme then becomes simply finding out which (of a near limitless supply?) of two-player games were chosen: MASTERMIND, CHECKERS, CHESS, GUESSWHO and BATTLESHIP. I’ve never encountered GUESSWHO, but it is for sale here, so I guess I just skipped it. The list-y nature of the theme meant the puzzle played very easy for a Thursday, for me at least.

The biggest desperation play in the grid today is SSTAR, which is perhaps a hair above RRN’s in its desperation.