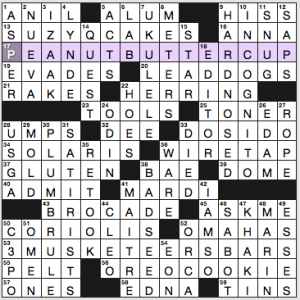 So this is a themed 70-worder, with four theme answers. You know what happens when you jam 50 theme squares into an open, 70-word grid? You get some nightmarish fill and crossings. 1-Across announces the sort of fill you can expect, as that [Blue dye] is crosswordese ANIL. (The opposite corner flails with SABOT ESSES IAMSO). If you don’t know that the fisherman of yore is IZAAK Walton and that the old game-show legend is Paul LYNDE, then you’d better know ANIL and you’d better know the spelling for SUZY Q CAKES has a Z, or you’re not finishing this puzzle correctly.

The tough clues would play a lot better if there weren’t so much awful fill in the puzzle. Clues that stymied me for a bit:

Did not know: 28d. [Green-conscious grp.], USGA. Is … is there a U.S. Golfers Association? Nope. This is the United States Golf Association, an org for golf courses and clubs. Why would anyone know about that? Also did not know this was a thing that existed: 30d. [Surveyor’s instrument], PLUMB RULE. According to my husband, the plumb rule is to always use a plumb line, which is a thing we have heard of.

So, that theme. Hostess SUZY Q CAKES, which are sold as Suzy Q’s chocolate cakes, so rather a bogus wording for a crossword answer. One singular Reese’s PEANUT BUTTER CUP, which is semi-bogus. Plural Mars 3 MUSKETEERS BARS, with a numeral and in the plural for no reason other than “that’s how it fits into a 15 to match the singular PEANUT BUTTER CUP.” And then the weirdish Nabisco OREO COOKIE, just the one. So as themes go, I suspect this would have been rejected out of hand in a ≥74-word grid. And none of this explains why a dentist is packing all this sugary junk food into his crossword! Tsk.

THEME: H and A added to phrases to make wacky answers. 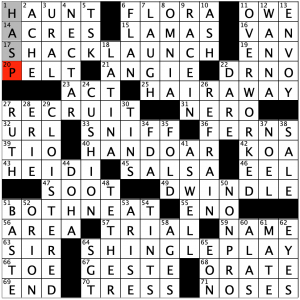 I solved this much like it was a quirky themeless – most of the puzzle fell really nicely and for the themers, the clues were clear enough that just a few crosses made each one solvable. After finishing the puzzle I was scratching my head a bit as to what exactly the theme was. For me it took the 2-letter comment in the last theme, the title, and the clue for 7 down [Hoped-for reaction to this puzzle] to get my aHA moment. Take the HA out of each themed answer.

Is this puzzle clever and well-constructed? YES
Did calling Cat on a Hot Tin Roof SHINGLE PLAY make me LAUGH out loud? YES
Did I understand the why of this puzzle? NOPE

But really I don’t need a why to enjoy a puzzle and the absurdness of these answers was great, with SHINGLE PLAY and HAND OAR definitely the stand-outs of the day. The only one that really didn’t do it for me was BOTH NEAT – BOTNET felt out of place among the other entries that were 2-word phrases and much more common.

Fill-wise I absolutely need to shout out the celebration of women that is the fill in this puzzle! Loved the clues for LATINA [Jennifer Lopez or Sonia Sotomayor] and DR NO [Bond film starring Ursula Andress] – as well as the inclusion of RUTH Bader Ginsburg and HEIDI Klum – JUST YES TO ALL OF THIS!

Didn’t love HASP, GESTE, or KOA – actually the P in HASP was my last letter filled in because no matter how many times I see HASP in a grid my brain can’t remember that it’s a word. Some beautiful long bonus entries like OVERWORKED and CLOISTERED here more than made-up for any of the less exciting fill.

3.75 stars from me today for enjoyment and wackiness

Themeless Fridays are the best because I get to do TWO themeless puzzles… except for today, when someone (not naming names, but they’re reviewed elsewhere in today’s post) apparently forgot that Themeless Friday is a thing. Fortunately, this beautiful themeless from Natan Last more than made up for my disappointment (and craving for Reese’s Cups). 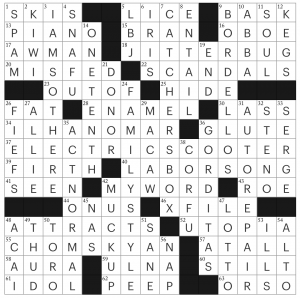 Overall, fantastic, satisfying, non-snackfood-filled (did you see that BRAN muffin tho? That is a *choice*) Themeless Friday. 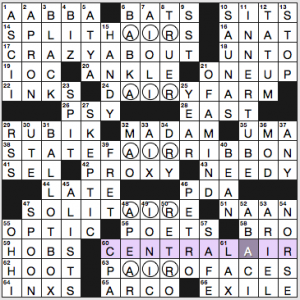 This theme would have worked without the revealer, since CHE is a venue that uses puzzle titles. But CENTRAL AIR is in there, clued as 60a. [Perk highlighted by real-estate agents … or a hint to this puzzle’s arrangement of circled letters], and there’s AIR in the exact center of five rows. The themers are SPLIT HAIRS, DAIRY FARM, STATE FAIR RIBBON (my cousin, her husband, and their kids just won five ribbons at the Will County Fair!), SOLITAIRE, and PAIR OF ACES. All solid.

The fill doesn’t suffer much from CENTRAL AIR being stacked atop the final themer—you could grouse about partial A PEAR and prefix PETRO if you were so inclined.

Jenni: I wrote this draft once and WordPress ate it, and now I’m out of time, so here’s the theme: 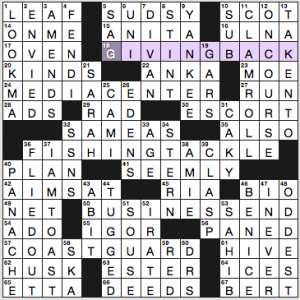 I wasn’t too keen on some of the multi-word answers, like ON ME, SAME AS, AIMS AT, I AM TOAST, and TAKEN TO. And there was A BIT of a stodgy-fill vibe, with RIA, ESTER, SSNS, SOUSE, and SAHIB. I did like BE NICE, I NEVER, ON COURSE, and PANACHE, though.

CLAM ROLL frightens me. I don’t do shellfish, and I’ve never seen CLAM ROLL on a menu here in Chicago.