This looks like it’s a debut for Katja Brinck. Congratulations!

Katja and Brad get a little overzealous with their use of personal pronouns, so much so that they’ve injected a bunch of them into well-known phrases, thus creating crossword wackiness. 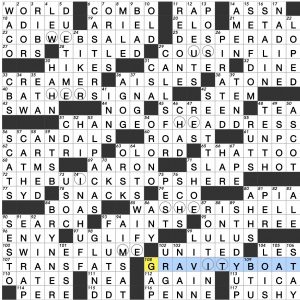 But that didn’t stop me from enjoying the theme entries and the humor that is evident therein. For some reason, I like CHANGE OF HEADDRESS best, followed by Isaac Newton’s vessel, GRAVITY BOAT, which seems like a hipster/ironic name for something that’s supposed to float.

I also really like most of the choices of base phrases which are a lively bunch for the most part. Given a wide-open theme like this, I bet they had a lot of options to choose from, and I think they made some good choices.

Beyond the theme, the fill is solid, if not shiny. I like DUE TIME [An appropriate future moment], but it feels like it’s missing the leading “IN.” DESPERADO, TRANS FATS, “THAT, TOO!”, SLAPSHOT, SCANDALS, CAR TRIP, ALPACAS, SEATTLE, and PIRATED are the other highlights. And I like UGLIFY as well, which, apparently, is a real word.

I almost thought I would Natick at the crossing of foreign-language word SESTO [Sixth, in Siena] and proper name OATES [“Because It Is Bitter, and Because It Is My Heart” author]. Thankfully, the O is the only thing that made sense.

Other unfortunate entries include all these tough geographical names ESPOO, APIA, ORONO, and ORSK.

Fave clue goes to 46a [Political hanger-on?] for CHAD. Those hanging chads of the 2000 election have provided so much fodder for ongoing jokes, haven’t they? Although, if your name is Chad, you probably think it’s all rather grim. 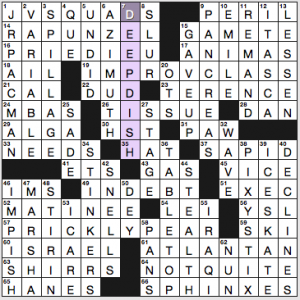 So I know some people blew through the Friday NYT faster than usual, but it fought me. And then the Saturday NYT rolls out, and whoosh, I zip through it like a Tuesday or Wednesday puzzle. It was a lot of fun, and I saw the generous helping of Scrabbly letters but didn’t feel like the filler stuff was crap to facilitate things like PIXY STIX and JV SQUADS.

Preemptive measure: Don’t waste your breath with a tired rant about how Chicago’s DEEP-DISH pizza is some dang “casserole” or what-have-you. Try it at Lou Malnati’s before you pass judgment. Lou’s deep-dish is substantively different from other places’ deep-dish pies. Chunky tomatoes, Wisconsin mozzarella, and you gotta get the butter crust. You like sausage? Lou’s classic presentation is to plunk a giant disk of their sausage (shudder—I don’t eat sausage) on the middle of the pizza, rather than small pieces of sausage, so if you dig sausage…

Fill I liked, besides the three previously mentioned entries: RAPUNZEL, IMPROV CLASS, PRICKLY PEAR, NOT QUITE, SPHINXES, JR. PAC-MAN, sciency AZIMUTH, PANCREAS (friend of mine got a kidney/pancreas transplant a few years back), and Minnesota’s Lake ITASCA, which is the headwaters of the Mississippi River. (About that last one: Wikipedia tells us, The Ojibwe name for “Lake Itasca” is Omashkoozo-zaaga’igan (Elk Lake); this was changed by Henry Schoolcraft to “Itasca”, coined from a combination of the Latin words veritas (“truth”) and caput (“head”), though it is sometimes misinterpreted as “true head”. It is one of several examples of pseudo-Indian place names created by Schoolcraft. Oh, the caucasity!) 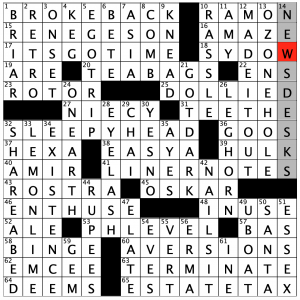 Erik is the man! He has both this puzzle and the Stumper this week! This one, in tru Erik style, has great entries that you don’t always see in crosswords. I tried to race through this one, and the clues weren’t too difficult, so I got it filled in just over four minutes, but I have solved a lot of Agard puzzles (I have his book!) in the last few years, so I think I am at least somewhat on his wavelength. Believe me when I say I found the Stumper MUCH harder. See that review below. 4.4 stars for this one.

A few of those great entries:

It is Saturday, so time to watch the Wolverines today! 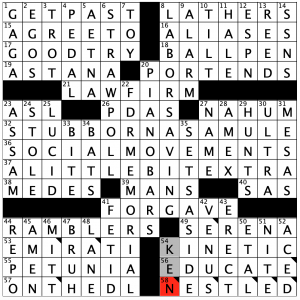 Erik is the man! As mentioned in the LAT post above, Erik has this puzzle AND the LAT puzzle today. The LAT puzzle was not so difficult; this one was a different story. It took me over half an hour to crack this one! Tons of tough clues, a word or two I didn’t know, AND a wide-open grid contributed to a high level of difficulty. I was scratching my head several times. There is a mixture in the middle of this grid of several long entries, including a stack of three 15s, which is also a feat of construction. I will mention mostly those below, but it is time to go lick my wounds from this one! 4.8 stars for a stellar puzzle!

THEME: Phrases that end with words that can follow “party”

A very enjoyable puzzle with some clever clues and a classic, but well-executed theme. I wasn’t able to figure out the connection before the revealer, which (when the revealer is solid) is always fun for me.

Some new vocabulary for me was refreshing to uncover including TANGRAMS, ELYSEE PALACE, and HIGH HAT. I always associate the last phrase with a drum kit, even though that’s spelled HI-HAT more often than not. Googling HIGH HAT in quotes mostly yields pages that are trying to hawk drum parts, but indeed the main definition offered at the top of the page is the one used in the puzzle.

LOVED the clue for 3-Down [A la King?] EERILY. Stephen King, that is. It’s also timely as the second half of the It reboot was just released in theaters.

Perfect Universal fare: Not too hard, a couple new things, and a solid easy-to-grok theme that is not overtly obvious from the get-go. Also… excellent title.